The Celtics look to end their 2 game losing streak against the Bobcats and extend their own 10 game home win streak.

Share All sharing options for: Celtics host the Bobcats with a bit of revenge on their minds

The Celtics host the Bobcats for the 4th and final game between these two teams. The Bobcats have always seemed to give the Celtics problems and this season, in spite of having just 14 wins, they have beaten the Celtics twice. The Celtics should have easily beaten them in their last meeting but gave no effort and were blown out instead.

Every game is important for playoff seeding. After the Heat, the standings could change with each game. The Celtics are currently in the 6th spot but they have the same record as Atlanta in 7th and Chicago in 5th and a win could move them into 5th while a loss could drop them back to 7th. They are just 2.5 games behind Brooklyn in 4th.

The Celtics are 3.5 games behind New York for the 3rd seed and for the Atlantic Division lead. New York has been struggling with Amare likely out for the season and both Tyson Chandler and Carmelo Anthony struggling with knee injuries. They are also in the midst of a tough western road trip, so catching them isn't out of the question if the Celtics play well.

The Celtics had a rare practice on Friday to try to catch some slippage in their defense and spacing. The Bobcats are playing in back to back games while the Celtics have had 2 days off and should be ready to avenge the previous 2 losses to the Bobcats. There should be no way the Celtics take the Bobcats for granted in this one. 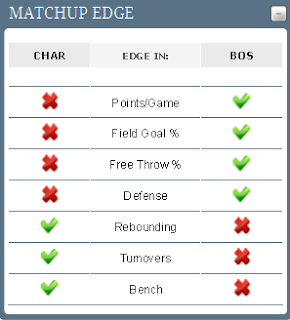 Brandon Bass has been playing well and the Celtics need him to continue to crash the boards and be aggressive on offense. They need more from him. McRoberts had 13 points and 10 rebounds in their last meeting. Bass needs to out-play him in this game.

Henderson is having a decent season for the Bobcats, averaging 13.3 points, 3.6 rebounds and 2.2 assists per game. In the last meeting between these two teams, he erupted for 35 points and in their previous meeting, he posted 16 points, 4 rebounds and 4 assists. He loves playing the Celtics. Lee (and Bradley) need to keep him from having another big game. The Celtics also need some offense from Lee.

Walker is playing very well for the Bobcats, averaging 17 points , 3.4 rebounds and 5.6 assists per game. Bradley should be able to match his speed and stay ahead of him to slow down both Kemba and the Bobcats' offense. He may also need to help guard Henderson if he is scoring like he did in their last meeting.

Vengeance - The Bobcats have just 14 wins on the year. Two of those wins came at the expense of the Celtics. Just Tuesday night, the Bobcats embarrassed the Celtics with a 26 point blow out. The Celtics have a way of not taking the bottom feeding teams seriously and tend to give less than 100% against them. Since the Bobcats have beaten the Celtics two times in a row, the Celtics need to come into this game with revenge on their minds and get this win.

Rebound - Good things happen when the Celtics crash the boards. When they show energy in rebounding, that energy spreads to other areas of the game. They prevent second chance points and fast break baskets by grabbing the rebounds as well. The Celtics need to swarm the basket as a team.

Defense - The Celtics need to make defense their priority. The effort that the Celtics put out on the defensive end carries over to the offensive end as well. The Celtics have been playing some very good defense led by their Pit Bull backcourt and they need to continue to do so. The Celtics let up on defense and allowed way too many easy baskets for the Bobcats in their last meeting. They have to do a better job in this one.

Run the Offense - The Celtics offense looks incredible some nights and then should be on a milk carton the next night. They have to move the ball and find the open man. Each player has to move without the ball to get open. They can't play hero ball. If their jumpers stop falling they must go to the basket.

The Celtics lost both times they played the Bobcats in Charlotte, but they won their first meeting at the Garden. The Celtics have also have a 10 game win streak going at the Garden. They can't possibly take this team for granted after losing to them in their last two meetings. They need to get a boost from the home crowd and come out focused on getting the win.

Bennett Salvatore has been an official in the NBA for the past 30 seasons, and has worked 1,684 regular season and 203 playoff games including 25 NBA Finals games. The veteran official has also worked the 1993 and 2002 NBA All-Star Games, the 1993 McDonald’s Championship in Munich, Germany, and the 1997 Mexico Challenge. Prior to joining the NBA, Salvatore spent two years officiating in the CBA, and also has 10 years officiating high school. Salvatore missed the entire 2011-12 season with an injury.

Salvatore may just be the worst ref in the league, and that is saying a lot. Almost always one team or the other gets an advantage when he is officiating and I'll give you a hint, it usually isn't the Celtics.

Another of Salvatore's "butchered" calls was in the 2008 conference finals when he waved off a contested 3-pointer that Paul Pierce had hoisted over Richard Hamilton, inducing him to leave his feet with a ball fake and land on Pierce's back. Pierce, however, was charged with an offensive foul for creating the contact with Hamilton. It was a terrible call.

Adams tends to be inconsistent especially on charge/block calls. He is on Tommy Heinsohn's naughty list (along with a lot of others). In one game, Tommy went ballistic yelling at the top of his lungs "GO BACK TO YOUR MOMMA BENNIE ADAMS!!!" This is Adam's 5th game with the Celtics this season and they are 3-1 in the 4 so far and 5-5 in their last 10 with Adams on the court. In spite of Tommy's dislike of Adams, the 4 games he officiated for the Celtics last season were all called fairly even. All 4 games this season were also well officiated. The Bobcats are 0-3 this season and 2-8 in their last 10 games with Adams. His home team W/L record this season is 31-23.

Eric Dalen officiated 223 regular season games in his first four NBA seasons. Prior to the NBA, Dalen worked for five seasons in the NBA Development League and officiated the 2008 D-League All Star Game and the Finals. He also officiated for three years in the Southeastern Conference. Dalen was a two-year letter winner at the University of Minnesota where he played tight end for the football team. I couldn't find much on the guy other than an article where Andrew Bynum was complaining about Dalen calling all 6 fouls on him in a game in 2008.