Jason Terry returns to Dallas as the Celtics aim to end their losing streak.

Share All sharing options for: Celtics aim to end losing streak in JET's return to Dallas

Jason Terry makes his first visit to the American Airlines Center where he played for 8 years. Hopefully the crowd will give him a nice welcome for all he did for that team. This is the second game between these two teams as the Celtics beat the Mavericks 117-115 in Boston earlier this season. The Mavericks were without Dirk in that game as he was recovering from a knee injury.

The Mavs are in the 10th spot in the West, but just 3.5 games behind the Lakers, who are in 8th, so they aren't out of it yet. They will be playing hard to try to make up ground in case the Lakers stumble again. The Celtics have dropped back to the 7th spot in the East, tied record wise with Chicago in 6th and 1.5 games behind Atlanta in 5th. They are also just 4.5 games behind the Knicks for the 3rd spot and the Atlantic division lead. They are also just 2 games ahead of Milwaukee for the 8th spot and a first round matchup with the Heat. They really don't want to drop back into that 8th spot and so they have to find a way to win these games.

Both the Celtics and the Mavericks are 6-4 in their last 10 games. The Celtics have lost 2 in a row and are looking to get back in the win column. The Mavs are looking to avoid losing their second straight. The Mavs are a decent 18-14 at home while the Celtics are a pitiful 12-21 on the road. Shawn Marion has missed the last 8 games with a calf injury but says he plans to play in this one. The Matchup Edge gives every category to the Mavs except FG% and Defense. It won't be an easy game but the Celtics have to find a way to win.

The Celtics have proved that they can play with just about any team, building leads and staying with teams, but then falter in the second half. They need to develop better focus and effort, especially on the road, and close out games. Let's hope they come into this game mad at themselves for blowing the last game and win easily so that they can get some rest for the next night's game in Memphis. 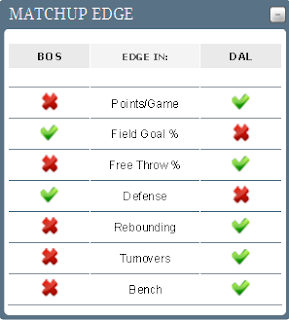 Mayo is a scoring threat for Dallas and it will be up to Courtney Lee to to guard him and keep him from having a big game. It would also be nice if Lee would get his own offense going as well.

Although Bass and Nowitski will be playing the power forward position, KG matches up better with Dirk, who is a bigger threat to score than Kaman. I expect to see more of KG matched with Dirk and Bass on Kaman. Containing Dirk will be a key to getting a win.

Rebound - Rebounding is so crucial to getting a win. When the Celtics put out the effort to grab rebounds, more often than not, that effort extends to other areas of their game. . Rebounding is all in who wants it more and the Celtics have to be the team that wants it more. They were out-rebounded by the Hornets 45-28, which is unacceptable. If the Celtics expect to win games they simply have to put out more effort on the boards.

Bench Play - The Celtics play again on Saturday in Memphis and so Doc will need to consider the minutes played by the starters. Against the Hornets, who have a fairly weak bench, the Celtics reserves were out-scored 39-17. Of course, Doc only went 8 deep. Doc needs to use his bench more to keep the starters fresh down the stretch. Dallas' bench averages 52.2 points and so the Celtics 2nd unit needs to play hard on both ends of the court. They have to match the energy from Dallas' reserves.

On the Road And JET's Team

The Celtics have played terribly on the road this season. They are not a young team that would be intimidated by a hostile crowd so there is no excuse, other than lack of focus and effort for the losses on the road. They have to stay focused and play hard from start to finish. Jason Terry would love to get the win over his old team and so his teammates need to back him up and play harder to give him one.

Malloy has officiated 629 regular season NBA games and 32 playoff games, including three Finals games, over the past 10 seasons. Prior to joining the NBA, Malloy officiated for one season in the NBA D-League, three seasons in the CBA and three seasons in the WNBA. He worked the 2002 NBA D-League Finals and the 2001 CBA Finals. Malloy attended St. Joseph’s University before transferring to Philadelphia University, where he was a member of the basketball team and named the ECAC Player of the Year in 1993 and went on to earn a degree in Marketing. While in high school at Cardinal O’Hara, he was named the 1989 Most Outstanding Player in Philadelphia for his achievements on the basketball court. Ed Malloy joins Tim Donaghy, Duke Callahan and Joe Crawford as referees who graduated from Cardinal O'hara HS in Philly.

In 2003, when Doc was with Orlando, Malloy called a technical foul on Andrew DeClercq for staring. Doc called it one of the worst calls he ever saw (boy has he seen a lot worse since then!)and he said that he felt that Malloy had been intimidated all night. Fast forward to the Celtics game in Utah two seasons ago when Malloy, no longer intimidated, called 2 quick technicals on Doc and ejected him. Here is Doc's version of those calls.

Malloy was also on the crew that officiated game 1 of the Miami series in the 2010 playoffs where 5 technicals were called and Kevin Garnett was ejected. He also officiated game 1 of the Heat series in 2011. In that game, after ignoring a flagrant foul by James Jones and then a second flagrant foul by Dwyane Wade, Malloy ejected Pierce for technicals when he objected to both flagrants against him in less than a minute. Last season he called game 2 vs the Hawks in the playoffs. The Celtics shot 31 free throws in that game vs 20 for the Hawks and got the benefit of most close calls. He also called game 5 in the Philly series in which the Celtics shot 33 free throws to 16 for the Sixers and again the Celtics got the benefit of close calls. This is Malloy's third game with the Celtics this season. The first game was the win over the Lakers at home where the Celtics shot 25 free throws to 30 for the Lakers and the officiating wasn't all that bad. The second game was the loss on the road to the Bobcats where the Celtics took 25 free throws to 30 for the Bobcats and the officiating was ok. They are 5-5 in their last 10 games with Malloy as an official. He can be good and he can be very very bad on any given night. He isn't necessarily influenced by the home crowd. His home W/L record is 31-26.

Adams tends to be inconsistent especially on charge/block calls. He is on Tommy Heinsohn's naughty list (along with a lot of others). In one game, Tommy went ballistic yelling at the top of his lungs "GO BACK TO YOUR MOMMA BENNIE ADAMS!!!" This is Adam's 5th game with the Celtics this season and they are 4-1 in the 4 so far and 6-4 in their last 10 with Adams on the court. In spite of Tommy's dislike of Adams, the 4 games he officiated for the Celtics last season were all called fairly even. All 5 games this season were also well officiated. His home team W/L record this season is 33-23.

The Celtics are 2-1 this season and have a 8-2 record in their last 10 games with Richardson as a referee. The last game he officiated last season for the Celtics was an OT win over Atlanta that was horribly officiated. KG fouled out on a terrible call where the Hawks were holding his jersey and elbowing him in the back and they called the offensive foul on KG. Stiemsma also fouled out with the 5th and 6th fouls coming within seconds of each other and were terrible calls. 12 fouls were called on the Celtics in the 4th quarter to just 4 on the Hawks. In OT they called 4 fouls on the Celtics and none on the Hawks. In an uncharacteristic show of emotion from Danny, he said after the game that he would be sending the tape of the game to the league office because the officiating was so bad. In a win over the Blazers this season, Portland shot 37 free throws to just 20 for the Celtics and the close calls seemed to go against the Celtics. He also called the Celtics Christmas day win over the Nets in which the Nets took 29 free throws to just 13 for the Celtics. He also called the home loss to the Grizzlies took 22 free throws to 16 for the Celtics and there were a few missed calls but the officiating wasn't too bad. His home W/L record this season is 28-20.