The Celtics look to break their 3 game losing streak as they visit the Memphis Grizzlies who have won nine straight at home.

Share All sharing options for: Celtics look to close trip with a win against the always tough Grizzlies

The Celtics look to close out their road trip against a Grizzlies team that is playing very well. Memphis is 12-3 since the All Star break with all 3 losses coming on the road. They have also won 16 of 21 since the trade that brought Tayshaun Prince to Memphis for Rudy Gay. The Grizzlies beat the Celtics 93-83 in January at the Garden.

That was before the Grizzlies' big trade and it was also Avery Bradley's first game back from his shoulder injury. The Celtics also had both Rondo and Sully and so both teams are considerably different since their first meeting. Both teams are also in the heat of the playoff race.

The Celtics are still in 7th half a game behind Chicago in 6th and 1.5 behind Atlanta in 5th. They are also staying 2 games in front of Milwaukee for the 8th spot and a 1st round matchup with the Heat. The Grizzlies are in 5th in the West just half a game behind the Clippers in 4th and 1 game behind Denver in 3rd.

Courtney Lee went down with an ankle injury in the Mavs game and considered day to day. I'm leaving him in the starting lineup since he may or may not play and I don't know who Doc would start, possibly JET or Terrence Williams, if Lee can't go.

Darrell Arthur (back) day to day 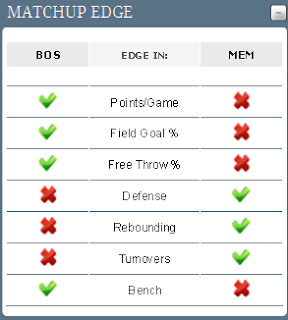 The matchup between the Celtics bigs and the Grizzlies bigs will be key in determining the winner. The Grizzlies are strong where the Celtics are weakest and that is in the middle. I expect KG to cover Gasol and Bass to cover Randolph because he is so physical that he'd be a tough cover for KG.

Prince is long and has always posed problems for Paul Pierce on both ends of the court. Jeff Green would match up better with him and I expect to see that matchup for at least parts of the game.

Defense - The team that works hardest on defense will be the team that wins. The Grizzlies are a good defensive team and will limit the Celtics' easy looks. They lead the league in points allowed at 89.2 points per game. The Celtics will need to match their defensive intensity if they want to win this game as they won't win in a shoot out. The Grizzlies are undefeated (20-0) when scoring 100 points in a game. They are also just 2-6 when allowing their opponents to score 100 points. The Celtics' defense against the Mavs was terrible for the most part. They struggled to cover the pick and roll and allowed the Mavs to score 30 in the first quarter and 104 points for the game. Not only will they lose this game if they continue to slack off on defense, they will also be a very quick first round out in the playoffs. The Celtics must bring their A-game on defense if they hope to get back to winning.

Rebound - Rebounding is very important in limiting fast break points and second chance points for Memphis. The Grizzlies are very good at getting second chance points off of offensive rebounds and putbacks with Randoph and Gasol playing inside. The Celtics must be aggressive in crashing the boards. The team that wins the battle of the boards usually wins the game. The Celtics have been outrebounded by large margins in their last 2 games. They must do better.

Take Care of the Ball - The Grizzlies are among the best in the league in forced turnovers and steals and they are also very good at scoring off those turnovers. The Celtics tend to get sloppy and turn the ball over at times and they must take care of the ball and avoid careless passes and lapses in focus or the Grizzlies will make them pay.

Be Aggressive for 48 Minutes - When the Celtics are passive and settle for jumpers and don't swarm on defense they end up in trouble. The Celtics need to come out strong and play aggressively until the final buzzer. They can't allow the Grizzlies to build a lead because their defense will make it difficult to come back. They also must be aggressive in going to the basket and not just shoot jumpers.

Both teams are playing in back to back games and both teams had to travel after their games. Bench play will be crucial in order for the starters to have enough energy to close out the game. The Celtics tend to lose focus on the road and they have to find a way to keep their focus on defense and winning from start to finish.

Over the past 23 seasons, veteran official Bill Spooner has worked 1,281 regular season games and 87 NBA playoff games. He officiated his first two Finals games during the 2010-11 season. In addition to his NBA experience, Spooner has seven years of collegiate officiating experience. He also has eight years of high school officiating experience in his home state of California. Spooner is the ref who failed to call Kobe's elbow to the throat of Ron Artest a couple years back, even though he was the ref in position to call it. Artest's complaints resulted in his ejection but nothing was called on Kobe in the game. The league later admitted their error and assessed Kobe a flagrant 1 for the elbow. But that didn't help Houston who had to play without Artest the rest of the game. Spooner is also the ref that was caught by a reporter telling Kurt Rambis that he would make up for a bad call he made on the other end.

Zach Zarba has officiated 559 regular season NBA games and 17 Playoff games during his nine-year career. Prior to joining the NBA, Zarba officiated in the NBA Development League for two years, where he was part of the crew that officiated the 2003 D-League Finals. He also spent one year officiating in the CBA and two years officiating in the IBL. Zarba has three years of collegiate officiating experience in the ACC, SEC, Colonial, ASUN, OVC and NEC Conferences. In addition, he has three years of high school officiating experience in New York. While at New Paltz, Zarba was a member of the basketball team and was named captain his senior season.