Celtics and Knicks square off with playoff seeding on the line

Share All sharing options for: Celtics and Knicks square off with playoff seeding on the line

The Celtics and Knicks clash for the 3rd time this season at a time when both clubs are battling injuries and also battling for playoff position. This may also be a preview of a first round playoff series if the positions fall out right.

The Knicks are in the 3rd spot, 1/2 a game behind the Pacers, who are in 2nd. . Brooklyn is 2 games behind New York, in 4th. The Celtics are sitting in the 7th spot, 2 games in front of Milwaukee for the dreaded 8th spot and 2 games behind Chicago in 6th. There certainly could be a shake up in those standings as we go down the stretch toward the playoffs. Every win or loss could make a difference in the seedings.

The Celtics won the first meeting in New York 102-96 as KG got into Carmelo Anthony's head as they clashed during the game and Melo taking it to the locker room and even outside the buses. New York returned the favor in Boston, beating the Celtics 89-86 in spite of a triple double from Rajon Rondo.

The Celtics have lost 4 in a row while the Knicks have won their last 4 games. The Knicks are 5-5 in their last 10 games while the Celtics are 4-6. The Knicks are a decent road team with an 18-16 record away from MSG. The Celtics have played well at home with a 24-10 record. Even with 2 head to head contests with the Knicks, it is very improbable that the Celtics will catch them for the Atlantic Division lead, but the Celtics can't afford to continue their losing streak as they work to stay out of the dreaded 8th seed. 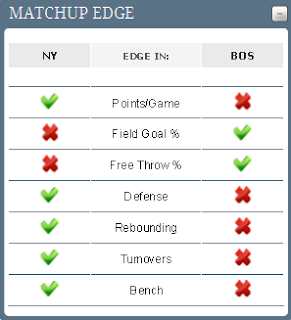 This is always a good matchup. Both are very strong and they play each other tough. They also seem to bring out the best in each other. Pierce has torched the Knicks in recent years, averaging 27.8 points on 52.9 percent shooting, including 49.3 percent from 3-point range, over his last 13 games against them. Carmelo Anthony is averaging 28.1 points in his last eight games against Boston. If these two stars cancel each other out, it will be up to the rest of team to step up.

I had to double check several times to be sure that they had Shumpert starting at the 4. But he started at PF in the last game and, according to the game notes, is supposed to start there again. That gives Jeff Green a 4 inch height advantage and hopefully he can take advantage of it.

Bass should be quicker than Martin and hopefully will have the advantage in this matchup. Bass will need to play physically though to match up with KMart who is a tough and physical player. Martin has played in 11 contests, while starting the last six. He's averaging 12.2 points on 67.3 percent shooting with 7.2 rebounds in those starts. He also had 18 points and seven rebounds in NY's last win over Tornto. Chandler is listed as a game time decision, even though he didn't participate in the shootaround. Hopefully he will sit this one out because he would be tough for the Celtics to match up with with out KG in the lineup.

Defense - The Celtics have to make defense their priority in this game especially because the Knicks can be a very dangerous offensive team. Whatever needs to be fixed for the Celtics to get back on track must begin on the defensive end. The Celtics must especially guard the perimeter as the Knicks are shooting 37% from beyond the arc and they aren't shy about shooting them.

Rebound - The Celtics are no longer last in the league in rebounding but close to it, at 29th with 39.7 per game. The Knicks are 23rd with 40.9 rebounds per game. The Celtics have got to crash the boards as a team and win the battle on the glass if they want to win this game. The Celtics average rebounding margin of minus-4.1 is one of the worst in the league this season. They are being outrebounded by an average of 10 during their recent 4 game losing streak. Losing their leading rebounder to injury will hurt them even more so every one on the team must make an effort to crash the boards. When they put out the effort to rebound, they usually play better all around.

Reserves - Injuries have hit both of these teams. The Celtics lost Rondo, Sully, then Barbosa and now Courtney Lee and KG. Doc said that Lee probably will play but KG is definitely out. Jason Terry is the only player on the Celtics bench this game that was on the bench the last time these two teams played in January. The Celtics must find chemistry among the players on the court, many of them new to the team. The play of the reserves against the Grizzlies gives hope for this game. Hopefully they can play well again.

Both teams have been hit with injuries. Both players have to scramble to come up with a different game plan and to fill in for missing players. The team that does this best should come out on top. Also, Tyson Chandler is a game time decision. The Celtics will have trouble matching up with him should he be able to play.

In many of the Knicks games I've watched this season, they got a lot of help from the officials. Hopefully they call a fair game in this one. It's hard to win playing 5 on 8. The Celtics must adjust to the officiating if the calls start to go against them.

A veteran of 22 NBA seasons, Mike Callahan has officiated 1,315 regular season, 122 playoff and 12 NBA Finals games. He was a member of the crews that officiated the 2007 NBA All-Star Game, 1994 Mexico Challenge and the 1996 Schick Rookie Game. Prior to joining the NBA, Callahan spent three years officiating in the CBA, including the 1989 and 1990 CBA Finals. A member of the Cardinal O’Hara High School basketball team for four years, Callahan also coached the freshman basketball team after graduating. Callahan has run a clinic for referees called "Hoops4Heros" that benefits local fire departments and maintains strong ties to the Philadelphia community through his volunteer work with the Don Guanella School for developmentally disabled boys.

The Celtics are 3-1 this season and 6-4 over their last 10 games with Tiven. The loss this season was New York in OT in the preseason in which the Knicks shot 38 free throws to 33 for the Celtics. One win was the Orlando game, also an OT game and worked with Phillips. The other wins were against the Sixers and the Suns. All of the games were fairly well officiated. The Knicks are 2-2 this season and 6-4 over their last 10 games. Tiven lives in Connecticut and he has a twin brother who is a big Celtics fan and who was shown in the crowd at the Garden in a game he officiated there. His home W/L record this season is 29-16.

Sean Wright has officiated 406 regular season and nine playoff games in his seven seasons. Prior to joining the NBA, Wright was an official in the NBA Development League, where he participated in the playoffs in 2003-04 and the championship game in 2005. Wright’s collegiate officiating experience includes working in the SEC, Colonial, Big South, Southern, Ohio Valley, Atlantic Sun and Southwestern Athletic Conferences. He participated in the Ohio Valley Conference championship in 2003 and the Men’s NCAA Division II tournament in 2004. He officiated the Eduardo Najera Foundation charity basketball game in 2006 and the Terrell Owens Foundation charity basketball game in 2005.

The Celtics are 0-4 this season and 4-6 in their last 10 with Wright on the court. One win last season was against the Bobcats where they shot a total of 80 free throws between them and they called every little foul all night but called them on both teams. He also called the loss vs Detroit where the Pistons took 46 free throws to just 15 for the Celtics and Tommy Heinsohn called it the worst officiated game of the season. It was Sean Wright that Rondo threw the ball at resulting in his ejection and suspension (which apparently was only suspendable for Rondo since Noah also threw the ball at a ref and got no suspension).

And fast forward to this season where Wright was one of the refs in the Celtics opener against the Heat where once again Rondo was called for a flagrant and a technical after he was completely frustrated by the failure of the refs to call multiple fouls by Wade and Battier against him. In the second game this season, a loss to Philly, Tommy called him an idiot after one particularly bad call. The third loss was against Milwaukee where the Celtics shot 20 free throws to 36 for the Bucks and the officiating was once again terrible with most of the questionable calls going against the Celtics including their failure to call a foul when Ilyasova elbowed Green in the head, injuring Green. They then refused to call a foul when the Celtics tried to intentionally foul to stop the clock. The 4th loss was to the Kings where the Celtics shot 19 free throws to 25 for the Kings but the officiating wasn't bad. The Knicks are 2-0 this season and 7-3 in their last 10 games with Wright. His home W/L record this season is 34-21.