Home is where the heart is for the Boston Celtics (usually)

Looking at the season in month-by-month chunks.

Share All sharing options for: Home is where the heart is for the Boston Celtics (usually)

By now we should know what our team is all about, right? The season is less than a month from being over. Still, I can't help but feel like there have been 3 or 4 seasons within this regular season. There was the struggles in the beginning, then Bradley came back and we were relatively at full strength, then Rondo and Sully went out and the team went on a run, but now they seem to be sliding back again. So would the real Boston Celtics please stand up (and tell me it isn't the one that has lost 4 straight headed into tonight's game).

I was thinking, you could pretty well break up the season into months. Bradley came back for the first game in January and Rondo was hurt on Jan 25th. So I thought I'd take a look at the NBA.com/stats page to see how the team has fared in each month. Here's what I came up with (All stats as of before the Knicks game). 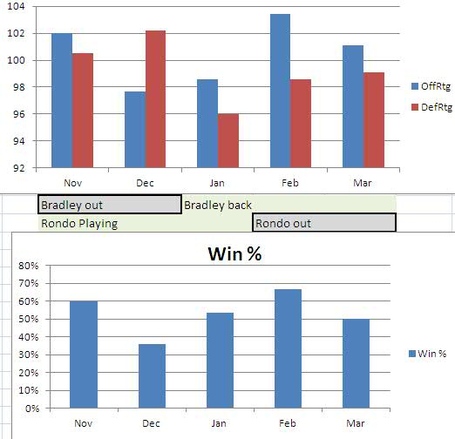 Wouldn't you know it, our defense got markedly better when Avery Bradley got back. In fact, it was as good as it gets when Rondo and Bradley were healthy together. The offense spiked after Rondo got hurt - and there's plenty of debate about why that would be, but I think it is reasonable to consider that an outlier based on inspired rally-around-each-other sharing of the ball play. Sadly that hasn't sustained and we've fallen back to efficiency ratings closer to where we started the season.

Basically it has been one big roller coaster of a year. With all that said, there's been one underlying constant throughout the whole season. The Celtics are really good at home and really bad away from home. In fact, for the season on a whole, they are winning 70% of their home games and just 34% of their road games. Looking at it month by month, it is no wonder why we struggled in December so much. There were tons of road games.

Unfortunately they couldn't take full advantage of all the home games (and full health) in January. In fact, they started off by winning 6 in a row (mostly home games) but lost the next 6 (3 home/3 away). If only they could have picked up a few of those wins before Rondo went out, the narrative would have been very different during the next few weeks after his injury.

So what does all of this prove (besides the fact that I know how to make graphs in Excel)? I'm not sure, but I know it is a shame that we (likely) won't be enjoying home court advantage in the playoffs anytime soon.