Hawks visit Celtics for final showdown of the season

Boston hosts Atlanta for the second time in the fourth-and-final showdown between these two teams.

Share All sharing options for: Hawks visit Celtics for final showdown of the season

Boston hosts Atlanta for the second time in the fourth-and-final showdown between these two teams. The teams split two games at Philips Arena this year, with Boston winning 89-81 after coming back from a 19-point deficit. The Hawks evened things up with a 123-111 double-overtime win at home, coming back from 27 down for the victory. The Celtics not only lost the game, but lost Rondo for the season in that game as well. The Celtics took game three, a 107-102 home decision, in overtime on March 8. It seems that overcoming big deficits (or losing big leads) and overtimes are recurring themes in the games between these two clubs.

The Celtics have won their last three home games against the Hawks, with Atlanta’s last win in Boston coming on 1/11/10. Boston leads the all-time series 220-133 with a 118-34 record at home. Both teams come into this game off a win and both are looking to put together a 2 game win streak.

The Celtics remain in the 7th spot in the East and have a 2.0 game cushion over the Bucks, who are in 8th. The Hawks are 2.5 games ahead of the Celtics in the 6th spot and just percentage points behind the Bulls, who are in the 5th spot. Every game from here on out could have playoff implications.

Doc said on Thursday that he has no idea who he's going to start in this game. I've listed the starters from the last game, who are posted in the game notes, but we could very likely see a different lineup as Doc plays mad scientist with the lineups in the absence of Kevin Garnett, trying to find one that works.

Courtney Lee participated in the shootaround and that is a good sign that he may be ready to return for this game. The Celtics may catch a break in that the Hawks have listed Al Horford as questionable with a stomach illness. One thing is certain, whoever plays, has to play with energy on both ends of the court for the Celtics to win. 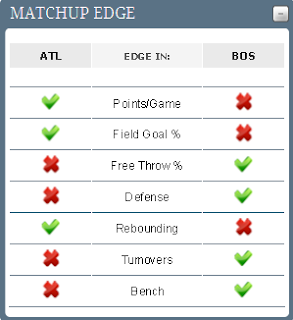 Smith is a very athletic and quick power forward and Brandon must box out and keep Smith off the boards along with slowing him down on offense. Smith is averaging 17.4 points and 8.5 rebounds per game so Bass will need to be aggressive on defense to keep Smith from having a big game.

Al Horford is playing well and is averagin 17.6 points and 10.3 rebounds per game. Wilcox will have his hands full keeping him away from the basket. Horford is strong and is always a threat around the basket. Celtics bigs must box out to keep Horford from grabbing rebounds. The Celtics may catch a break in that the Hawks posted this morning that Horford is questionable with a stomach illness. Johan Petro would probably start at center if Horford can't go.

Jeff Teague is capable of putting up big numbers. Bradley's defense will be key, not just to contain Teague, but also to slow their offense down and keep them from getting into their sets until late in the shot clock.

Defense - Defense is key to every win. The Celtics need to play tough team defense. They have to guard the perimeter as the Hawks have good 3 point shooters like Korver and Teague who can kill a team from beyond the arc. They also have to defend the paint because players like Smith, Horford and Johnson can get to the hoop and score there, especially on tip ins and second chance baskets.

Rebound - The Celtics must make an effort to go after rebounds. They must box out and prevent tip ins and to prevent the Hawks from getting second chance baskets. The Hawks are a good rebounding team, but not great. The Celtics have moved up to 29th in the league and the Hawks are just 24th. If the Celtics put out effort on the boards as a team, they should be able to win the battle of the boards.

The Celtics are at home and they have played well there. They need to get a boost from the home crowd. They know they are entering the final stretch. It is important for the Celtics to get into a rhythm and go into the playoffs playing well. That needs to start here.

Monty McCutchen has officiated 1,138 regular season, 94 playoff, and six Finals games. He worked the 2007 NBA All-Star Game in Las Vegas and was a member of the crews that officiated the 1996 and 1997 Mexico Challenges, as well as the 1998 Schick Rookie Game. Prior to joining the NBA, McCutchen spent four seasons in the CBA, where he worked the All Star game his second year and the playoffs all four years. He also officiated the CBA Finals the last three years he was with the league. McCutchen missed the 1998-99 season with a ruptured Achilles tendon.

The Celtics are 5-5 in their last 10 games and 2-5 this season with McCutchen on the court. He officiated the Heat game to open the season. Needless to say, he allowed Wade and Battier to grab and shove off and foul all game, which led to Rondo's flagrant on Wade out of frustration. He also called a preseason loss to the Knicks and a win over the Wizards where the Celtics took 34 free throws to 7 by the Wizards. He called the 103-88 loss to the Pistons where the Celtics took 25 free throws to 31 for the Pistons, but the officiating wasn't particularly bad. He also called the win over the Lakers at home and the loss at Portland where they let them play and the officiating was ok. His last game with the Celtics was at OKC where the Thunder shot 33 free throws to 20 for the Celtics. The Hawks are 3-1 this season and 6-4 in their last 10 games with McCutchen. His home W/L record this season is 38-19.

Lewis has spent the last eight seasons in the NBA, officiating 481 regular season games and 10 playoff games. Lewis spent two years working in the USBL, officiating the Finals in 2002 and 2004. Prior to that he spent three seasons in the NBA Development League, where he worked the 2004 D-League Finals and the 2003 and 2004 Playoffs. He tallied eight years in the college ranks, participating in the Atlantic Sun, Ohio Valley, Sunshine State, Florida Sun and Mid-Florida conferences. Lewis officiated in Florida high schools for six years. As a student, he was a member of the basketball team in both high school and college.

Derek Richardson has officiated 906 regular season games and one playoff game, as well as the 2003 NBA Rookie Game in Atlanta, during his 15 seasons as an NBA official. Prior to joining the NBA, Richardson spent eight years officiating in the CBA, including the 1996 CBA All-Star game and two games of the 1996 CBA Finals. Richardson played basketball at Los Angeles Southwest College and earned an Associate of Arts degree in Criminal Justice. He went on to earn a degree in Administration of Justice from Los Angeles Dominguez Hills. Richardson has volunteered with the South Central Los Angeles YMCA, assisting with youth basketball programs.