Celtics and Knicks clash in a possible first round preview

The Celtics travel to Madison Square Garden to take on the Knicks for the 4th and final time this season.

Share All sharing options for: Celtics and Knicks clash in a possible first round preview

The Celtics travel to Madison Square Garden to take on the Knicks for the 4th and final time this season. Although the Knicks have taken the Atlantic Division crown from the Celtics, there is still plenty to play for in this one. First and foremost, this may be a preview of the first round playoff matchup if the standings remain as they are now. Second, these teams really don't like each other and there is pride involved, especially for the Celtics who allowed the Knicks to push them around in the game 5 days ago at TD Garden. .

Third, there could still be some shake up in the standings and the Celtics could move up in the standings whereas, the Knicks are trying to hold off the Pacers and keep from dropping to the 3rd spot. The Celtics are 3 games in front of the Bucks, who are in the 8th spot. They are also 1.5 games behind Chicago in the 6th spot and 2 behind Atlanta in the 5th spot. The Knicks are just percentage points in front of the Pacers and need the win to stay in the 2nd spot.

The game notes have the same big starting lineup that Doc has used i the past two games. He has said that he's not sure who will start each game, but that lineup is 2-0 and so it seems logical to stick with it while they are winning. Hopefully the bench will also produce as they did against the Hawks. 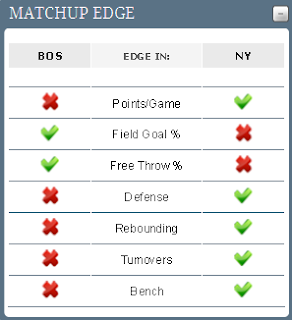 Kenyon Martin had 9 points and 5 rebounds in the Tuesday's game and afterwards said that he had a chip on his shoulder against the Celtics for backing out of a deal to sign him. Danny since said that he never talked to Martin so he may even have more fuel to his fire in this game. Chris has to be aggressive on both ends of the court.

Paul Pierce has said that the toughest matchup for him in the league is Carmelo Anthony. If Doc sticks with the big starting lineup he has used in the last 2 games, it will fall to Jeff Green to try to stop him. Slowing Melo down is key as the Knicks go as Melo goes. In the last 7 games between these two teams, in the Knicks 4 wins, Melo has averaged 32 points per game, but in their 3 losses, Melo has averaged just 23.7 points per game on 34% shooting.

Stop JR Smith - JR Smith has emerged as the Knicks top gunner. In Tuesday's game against the Celtics, Smith scored 32 points off the bench. He then went on to score 35 against Memphis and 37 against the Bobcats, both Knicks' wins. It will be crucial for the Celtics to try to slow Smith down and keep him from having another big game.

Defense - The Knicks have been playing good defense since Woodson took over as coach and the Celtics have also gotten back to their defensive roots, although they have also strayed from it in some games. The Celtics have to make defense their priority in this game especially because the Knicks can be a very dangerous offensive team. The Celtics must especially guard the perimeter as the Knicks are 2nd in the league in 3 pointers made and they aren't shy about shooting them. But they also have to guard the paint because the Knicks have several players who can take it strong to the hoop like Melo, KMart, and Smith as well.

Rebound - The Celtics are 29th in the league in rebounding but he Knicks aren't all that much better, coming in at 24th. Chandler is questionable for this game and they will be a bigger threat on the boards if he plays. The Celtics have got to crash the boards as a team and win the battle on the glass if they want to win this game.

Play 48 Minutes - The Celtics must get off to a good start and play hard for 48 minutes in this game. The Celtics have gotten off to strong starts only to collapse and give up big leads. They have also gotten off to slow starts and sometimes have come back and other times have not been able to catch up. They may get away with slow starts or with letting up in the game with some teams, but they can't count on the Knicks to let them back in if they get themselves down in this game.

Focus On the Road

The Celtics have been terrible on the road this season and that's putting it mildly. They have won just 13 games away from home this season. It will be crucial for the Celtics to find a way to get back to winning on the road since they won't have home court in the playoffs and will need to win on the road then. This would be a good time for them to find that focus and prove that they can beat a quality team on the road.

Mark Ayotte completed his eighth NBA season having officiated 469 regular season games. Prior to joining the NBA, Ayotte was a WNBA official for four years and a CBA official for three years. He spent one year officiating in the NBA Development League. Ayotte has 12 years of collegiate officiating experience, having participated in the Pac-10, Big Sky and West Coast conferences. He officiated in the Pac-10 Conference Tournament and the Big Sky Conference Tournament, including the finals. Ayotte also was an official for the preseason and postseason NIT. He has 10 years of high school officiating experience in the state of Arizona. Prior to becoming a professional basketball referee, Ayotte worked as a Systems Design and Test Engineer with AG Communication Systems.

The Celtics are 1-2 this season and 3-7 over their last 10 games with Ayotte. He called a win over the Nets in the preseason and a loss at Detroit and the officiating was ok in both. He also called the loss to the Lakers in LA where they took 31 free throws to 20 for the Celtics and most of the questionable fouls went LA's way. The Knicks are 2-1 this season and 5-5 over their last 10 with Ayotte. Ayotte was one of the refs in the Mavs/OKC game in which Marc Cuban was fined $75,000 for criticizing the referees. Ayotte has a home W/L record this season is 37-18.

John Goble enters his fifth season having officiated 314 regular season games and 13 playoff games. He also officiated the 2010 NBA All- Star Rookie/Sophmore game. Prior to working in the NBA, Goble officiated 104 games over four seasons in the NBA Development League and was selected to officiate the 2007 NBA D-League Finals. He also officiated in several college conferences, including the Southeastern Conference, where he was a tournament official in 2006 and 2007, and the Sunshine State Conference. Goble received a Bachelors degree in Physical Education from Florida International University, and worked as an account executive and a teacher before joining the NBA. Seems odd that Goble already has worked the playoffs with just 4 years of experience and others have been in the league 12 years or more and haven't cracked the playoff rotation yet.

Goble was the referee who called the clothesline on Barbosa in the first Nets game a regular foul. He also called a foul at the end of the game on an obvious clean steal that could have changed the outcome of the game. The second game that Goble called was vs the Cavs and the officiating was good for the most part. He also called the OT win over the Jazz where the Jazz shot 24 free throws to 20 for the Celtics and the officiating wasn't bad. The last game he called was a win over Philly where the Sixers shot 20 free throws to 17 for the Celtics and the refs let them play. The Celtics are 7-3 over their last 10 games that Goble has officiated and 3-1 this season. The Knicks are 6-4 in their last 10 games with Goble and 1-2 this season. His home W/L record this season is 37-25.