Celtics look for 4th straight win as they visit the Pacers

The Celtics visit the Pacers for the second of 3 games this season, going for their 4th straight win.

Share All sharing options for: Celtics look for 4th straight win as they visit the Pacers

The Celtics visit the Pacers for the second of 3 games this season. Boston beat Indiana 94-75 at the Garden back in January. The Celtics will face the Pacers one more time on April 16, one day before their regular season ends. This could be a playoff preview as if the playoffs began today, these two teams would square off in the first round. 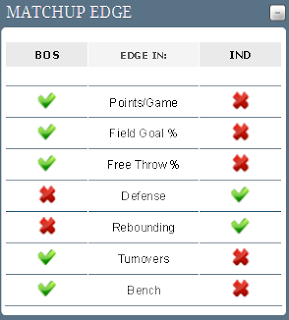 David West is playing very well for the Pacers, averaging 17.7 points and 7.6 rebounds. He is capable of having a big game if he is given an opening.

The Pacers are very tough to beat when both West and Hibbert are playing well. KG has to try to neutralize Hibbert and keep him from scoring and rebounding at the rim.

George is averaging 17.6 points per game and Pierce is going to need to slow him down. With Pierce putting in almost 30 minutes on Tuesday night vs the Sixers, we may see more Jeff Green on George if Pierce looks tired.

Defense - Defense is always a priority. The Pacers are a tough defensive team, ranking 5th in FG% allowed (43.5%) and 6th in points allowed (94). The Celtics will not get easy scores against them and must match the Pacers' defense with tough defense of their own.

Rebound - Winning the rebounding battle prevents second chance points and tip ins for the Pacers as well as limits fast break opportunities. The Pacers are the best rebounding team in the league, averaging 45.7 per game so the Celtics must work hard if they are going to get boards in this game. So much of rebounding is effort and desire. The Celtics must play like they want it more and put out the effort to go get the rebounds. When the Celtics put out the effort on the boards, it often translates to other areas of the game as well. They can get rebounds when they really put out the effort but it takes every player crashing the boards after every shot. It might be nice to see White or Randolph get a shot to see if they can help on the boards.

Ball Movement - There have been times when the Celtics' ball movement is a joy to behold and others when they make sloppy passes and just can't seem to get anything going. They have to continue to move the ball and find the open man. But they also have to be careful with their passes. The Celtics beat the Sixers with 22 turnovers, but they can't turn it over that many times against the Pacers and expect to win.

Back to Back on the Road

The Celtics have yet again another back to back game against a top rival. They had just 1 game in the previous 7 games so they should have been rested going into Tuesday's game vs Philly. They have proved that they can win back to back on the road and so hopefully they come into this game with the focus and energy it will take to pull out a win.

The Celtics are 1-3 this season and 4-6 over their last 10 games with Mott. One loss this season was to the Sixers and the officiating was good. The second loss was to the Spurs and the officiating was one sided with the Celtics shooting just 8 free throws to 20 for the Spurs. It was Rodney Mott that Rondo was joking with and accidentally bumped in the game vs the Hawks. Even though Mott didn't show any reaction at the time and backed up Rondo's story that he was indeed joking with him at the time, Rondo was suspended for the incident. The 3rd loss was to where the Celtics shot 26 free throws to 30 for the Bobcats and there were several questionable calls down the stretch. The Pacers are 2-1 this season and 6-4 with Mott in their last 10. His home W/L record this season is 29-19.

Brian Forte, who is the son of retired NBA referee Joe Forte, has officiated 275 regular season games in five NBA seasons. He also officiated the 2011 NBA All-Star Rookie/Sophmore game and was selected as an alternate for last seasons playoffs. He worked for six seasons in the NBA Development League, officiating 126 games. During that time he worked two NBA Development League Finals. He also officiated in several college conferences, including the Southern Conference, where he officiated the 2007 conference tournament final, and the Southeastern Conference, where he was selected to officiate the 2007 conference tournament. Forte also was selected to officiate the 2007 NCAA Tournament.

Forte was one of the refs along with Eddie F Rush that officiated a Celtics win in Indiana last season. The officiating in that game was horrible and very one sided toward the Pacers. One of the comments from the Pacers' forum said that they wouldn't blame Celtics fans if they punched out the refs. Tommy also had this to say, "I hope this group of officials doesn't officiate the playoffs. Holy cow! They are terrible." The Celtics are 1-0 this season with that win being over the Jazz and the officiating was even. They are 8-2 over their last 10 games with Forte as a ref. The Pacers are 2-1 this season and 4-6 over their last 10 games with Forte. His home W/L record this season is 27-24.

Mark Lindsay has officiated 283 games in his five NBA seasons. Prior to working in the NBA, he worked for five seasons in the NBA Development League, officiating 116 games, including playoff games in 2005, 2006 and 2007. Lindsay received a Bachelors degree in Elementary Education and graduated with honors from West Chester University where he was a three year letterman on the Men's Varsity Basketball team. He later worked as a teacher and a real estate sales agent before joining the NBA. He also officiated in several college conferences, including the ACC, Colonial Athletic Association, Atlantic Sun, Big South and Ohio Valley Conferences. Away from basketball he does motivational speaking engagements for professional groups and youth basketball clinics. He volunteers every summer at referee training camps to help younger officials learn the craft and has consistently been a proud contributor to the Juvenile Diabetes Research Foundation.