In their last meeting with the Hawks, the Celtics lost Rondo and the game. It's time to avenge the loss of both.

Share All sharing options for: The Celtics look to shake up the playoff seedings as they host the Hawks

After their 2 game road trip, the Celtics return home to face a tough Hawks team in a game that has playoff implications. The last time these two teams met things were weren't going very well for the Celtics. After losing the game to the Hawks, the Celtics had lost 6 in a row and were 3 games under .500. But even worse, it was in that game that Rajon Rondo tore his ACL.

Last season, Boston won the series between these two teams 2-1 but all 3 games were close. The Celtics won by 3 points and by 2 points in overtime while the Hawks won their game by 5. Every game between these two teams seems to end up being chippy. There is no love lost between them, that is for sure. The Celtics won the first meeting this season in Atlanta 89-81 but Atlanta won the second game, also in Atlanta, 123-111.

The Celtics have played well at home and have a 21-9 record at the Garden. The Hawks are just 15-16 on the road. Both teams are 6-4 in their last 10 games. The Celtics are on a 4 game win streak while the Hawks are looking to win their second straight. Atlanta avoided a 4th straight defeat Wednesday night with a 107-96 home win over the 76ers. The Hawks are in the midst of a tough stretch where they play 10 of 14 on the road. 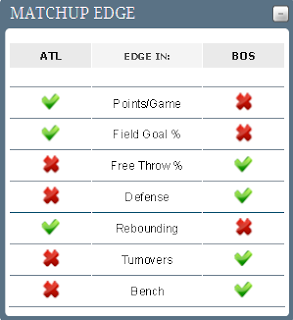 Smith is a very athletic and quick power forward and Brandon must box out and keep Smith off the boards along with slowing him down on offense. Smith is averaging 17.1 points and 8.6 rebounds per game so Bass will need to be aggressive on defense to keep Smith from having a big game. If Bass continues to struggle as he has in recent games, it might be a good time to give DJ White some run.

Al Horford is playing well and is averagin 17.4 points and 10.0 rebounds per game and KG will have his hands full keeping him away from the basket. Not only KG and Bass are key, but also the bigs off the bench as well. Al Horford scored 21 points to go with 12 rebounds and six assists in the Hawks win over the Sixers on Wednesday.

Jeff Teague is coming off a game with 27 points and 11 assists and is capable of putting up big numbers. Bradley's defense will be key, not just to contain Teague, but also to slow their offense down and keep them from getting into their sets until late in the shot clock.

Defense - Defense is key to every win. The Celtics need to play tough team defense. They have to guard the perimeter as the Hawks have good 3 point shooters like Korver and Teague who can kill a team from out there. They also have to defend the paint because players like Smith, Horford and Johnson can get to the hoop and score there, especially on tip ins and second chance baskets.

Rebound - The Celtics must make an effort to go after rebounds. They must box out and prevent tip ins and to prevent the Hawks from getting second chance baskets. The Hawks are a good rebounding team, but not great. The Celtics have moved up to 28th in the league and the Hawks are just 25th. If the Celtics put out effort on the boards as a team, they should be able to win the battle of the boards.

Ball Movement - The Celtics have made up for the loss of Rajon Rondo by moving the ball and advancing the ball with the pass. Hero ball rarely wins games. They need to continue to move the ball and play unselfishly and find the open man. But, in moving the ball, they also have to make careful passes and not turn the ball over.

The Celtics are at home and they have played well there. They need to get a boost from the home crowd. They know they are entering the final stretch and they also know that they are fighting for playoff positioning and home court for the first and possibly the second round. That should give them extra motivation to stay focused and get this win. The play of the bigs on both sides will be key to who wins the game. The Hawks have bigs who have the potential to dominate and it will be up to the Celtics bigs to out-play them.

Karl Lane enters his second year having officiated 44 regular season games. Lane’s experience includes four seasons and 167 games officiated in the D-League. He also has four seasons of NBA preseason game experience and has worked in NBA summer camps for six years. In addition to his professional experience, Lane officiated collegiate games for nine years in the SWAC and Gulf South Conference and has nine years of high school officiating experience. Lane worked for the Pulaski County Special School District in Little Rock, AR as an In‐School Suspension Teacher for 2 years before beginning his career as a referee.

This is his 7th game officiating for the Celtics. The Celtics are 5-2 in those games. In the last game last season vs the Cavaliers, Lane got under Tommy's skin a bit and after 3 bad calls in a row, Tommy said "This guy doesn't have a clue. His name's Lane. They should show him the highway." Lane called 3 game this season, a loss to Brooklyn in the preseason and a loss to the Pistons where they shot 31 free throws to 25 for the Celtics and there were several blown calls both ways. The 3rd game this season was a win over Chicago. The officiating was terrible and Lane once again got under Tommy's skin after 3 terrible calls in a row. Then to top it off, with 6.2 seconds left, he made a terrible call that fouled Avery out. This is his fifth game for the Hawks and they are 2-3 in those games. They are 1-2 with Lane this season. His home W/L record this season is 25-12.

Leon Wood’s connection with the NBA began as a player when he played professionally with Philadelphia, Washington, New Jersey, San Antonio, Atlanta and Sacramento, averaging 6.4 points, 3.2 assists and 1.2 rebounds as a guard during his six-year NBA career. In addition to his NBA playing career, Wood was a member of the Gold Medal winning 1984 United States Olympic Basketball Team, and he won another Gold Medal in the 1983 Pan-Am Games.

During his 16-season NBA officiating career, he has worked 995 regular season games and 19 playoff games. Wood has three years of CBA officiating experience and one year of collegiate officiating experience in the Ohio Valley and Trans America Athletic Conferences. He also has one year of high school officiating experience in California. Wood played for the University of Arizona for one season before transferring to Cal State Fullerton, where he was named All-American. The native of Santa Monica, Calif. is an inductee in the Orange County Hall of Fame, and in 1998, Wood was inducted into the Cal State Fullerton Hall of Fame. Wood was a member of the basketball team at St. Monica High School.

The Celtics host the Hawks in a game with playoff seeding implications.