Jeff Green and Production: A Guide to Consistency

An in-depth statistical analysis on Jeff Green's game and his future with the Boston Celtics.

Share All sharing options for: Jeff Green and Production: A Guide to Consistency

Does Jeff Green become a more efficient offensive player when he plays more minutes? This question has been on my mind all season. Fans of the Boston Celtics have called for Green to receive more time because of some terrific performances and game winning shots in the month of March.

I have always gotten the impression that Jeff Green becomes more proficient when he plays more minutes. He appears to be more comfortable getting over 34 or 35 minutes per game. From what I can tell, his style of play doesn't change much. Green's simply playing more often, taking more shots, which in turn makes him a more efficient basketball player. My aim is to try to figure out if a higher amount of minutes truly does lead to a more productive Jeff Green.

After sorting through the statistics, it's clear that Jeff Green's production increases when he gets more time on the floor. Statistics from the 2008 season and on were used for this analysis. His minutes per game were broken down into six categories for this analysis: 36-plus, 33 to 40, 33 to 36, 28 to 32, 26 to 32 and 20 to 32. These ranges were selected to show the potential disparity between points per game and minutes played.

Naturally, the more minutes you play, the more you'll score, which is why his points per minute were calculated. This statistic is being used to see if playing more minutes leads to a higher output of points per minute while a player is on the floor. After making the calculations, the theory that Jeff Green clearly scores more capably when he gets more time on the floor is supported. 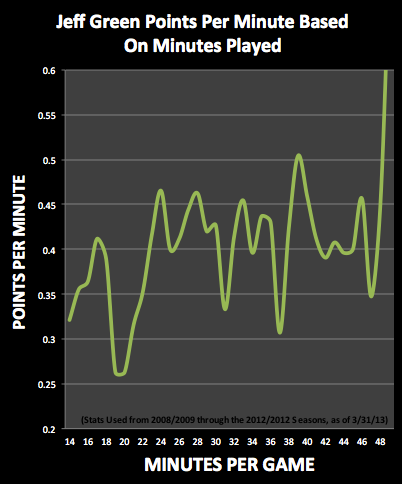 This could be related to his field goal attempts per minute, which is .32 when below 33 minutes per game and is .38 when over 33 minutes per game. Once again, those numbers may not seem significantly different, but consider this: If Jeff Green were to average 37 minutes per game, like he did with the Oklahoma City Thunder, and took .38 shots per minute, he would average 14.06 field goal attempts per game. But what if Green took .32 shots per minute in the same amount of time? Only 11.84. A difference of 2.22 shots per game in a 37-minute period would at least give him another basket or two per game, and potentially another shot at the free throw line.

From what I can gather, at around 25 minutes per game Green begins to find his consistent rhythm in terms of points per minute. His points per minute stay relatively consistent which leads me to believe he just a flat out inefficient player when he plays for below 25 minutes in a game, like the Boston Celtics have done so far in his time with the team. 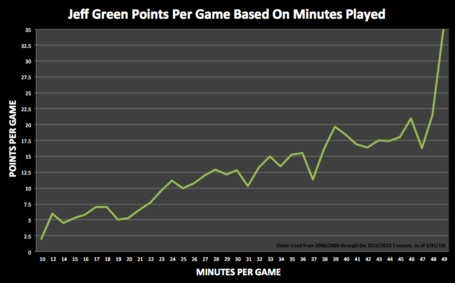 Green just doesn't develop the rhythm without getting a lot of minutes and likely doesn't take as many shots for that reason. Once he ramps it up even further with the big minutes, he is able to get more attempts per minute and that results in the higher production of points per minute. Jeff clearly needs to put up shots to get a rhythm going. This increases his potential of getting to the free throw line as well.

Because of my findings so far, and considering his extremely productive month of March, I decided to look more closely at his month-by-month production this season. As we have already found out, when his minutes are down, his points per minute are down. This is more evidence that Jeff Green needs is a healthy dose of minutes in order to produce at a higher level.

As you can see from the chart, there is likely a strong correlation between his points per minute and his total minutes per game. The more minutes he gets, the more often he scores; it's as simple as that. In March, Jeff Green had .51 points per minute despite taking only slightly more field goal attempts per game. Green isn't being much more aggressive, he's just able to put the ball in the net more effectively. He has a flow going on and needs minutes to sustain it.

This season, of course, Jeff Green heroically returned from his heart surgery, so was his lack of production early in the year because of that? Maybe. But in nine career games playing between 15 and 25 minutes with the Thunder, Jeff Green averaged 8.4 points with .415 points per minute. Those statistics aren't any different than what he had with the Celtics this year, playing a similar amount of minutes.

What does all this mean? I think it says that the Boston Celtics need to get Jeff Green playing more often in order for him to develop consistency. With Rajon Rondo out, this team will need scoring going forward. Paul Pierce and Kevin Garnett aren't going to be doing it every night, so it's important that Green is able to get going. The Oklahoma City Thunder played him at 37 minutes per game after his rookie season and I think from here on out he should get similar time.

This might mean a little bit less of a role for other players, but those players don't necessarily need the minutes that Green needs to get the maximum production you can get. The statistics show that he is a much better player when he is playing a lot of minutes. There is no denying Jeff Green's talent and he has flashed it throughout his career. If the month of March has been any indicator of what's to come---I look forward to the future for Jeff Green.