Follow the money: why releasing Paul Pierce is even an option

I hate when money gets in the way of sports, but this is nothing new.

As a fan and a blogger, I'm very used to spending other (rich) people's money. I demand results and I scream for the owners to "open up their wallets" to be competitive. If they don't, I feel perfectly comfortable calling them cheap and openly wishing that they sell the team to someone who can and will.

In truth, I should put all of that first paragraph in the past tense because this current ownership group has dropped their collective wallet in the center of the table and pushed all-in more times than not. In a world of Maloofs and Sarvers it is nice to have some good old fashioned big spenders in the house.

With all that said, I do recall the days before Kevin Garnett when Wyc and company were promising to pay the luxury tax only if they thought that they were going to be contenders. It didn't (and doesn't) make sense to pay tax on a lottery team.

So with everyone from Doc to Danny to ownership admitting that this team isn't currently set up to be a serious contender, you have to at least start thinking of the money again. In fact, it goes beyond the "willingness to spend" aspect. In fact, the Celtics signed a cable package that will make them very lucrative profits outside of the direct basketball operations. They can afford the debits on the salary side with all the credits they are getting from other revenue streams.

The real problem is the new Collective Bargaining Agreement (CBA). The new pact (which Wyc and company helped negotiate by the way) inflicts stricter penalties on teams exceeding the cap and especially teams doing so in consecutive years (the "repeater tax"). It isn't just financial pain either. Check out this blurb from our friends at LOY's Place.

Now ownership joins the dancing bear troupe. With the new CBA came series of ramped-up penalties, both financial and operational, for exceeding the Salary and Luxury Caps. Danny Ainge found himself mincing around the Luxury "apron" (could they have chosen a more mawkishly effeminate phrasing for their danger zone trigger). Go over the apron and they take away your sign-and-trade’s, cut short your MLE, steal your lunch money, and make you stand in the corner on one foot.

Restricting your GM tools is a draconian measure designed to dissuade the Lakers, Celtics, and other big pocket (big market) teams from going all Yankees/Red Sox on the rest of the league. That doesn't mean that teams won't do it with eyes wide open (the Lakers aren't batting an eyelash yet). It just gives GMs and owners pause before overspending for someone like a backup center.

Or cutting more to the core of our situation, it makes owners a lot more hesitant to pay aging stars what their legacy deserves. The decision isn't as easy as our sentimentality would wish for. Just take a look at what some other GMs think.

Talked to three NBA team execs over the weekend, and all three said if they ranthe Celtics, buying out Paul Pierce would be a no-brainer.

Doesn't mean buying out Pierce is what Celtics will do. It's just what would happen if those three execs were running team.

(Note: I think they mean "releasing" Pierce is a "no brainer" because buying him out is technically a different thing with different rules and impacts to the finances and the transaction itself.)

Now, that's easy for them to say. They don't have the banners and retired numbers looming down on them from the rafters. They don't have the lingering cigar smoke from older generations still wafting around the team offices. Basically you've got several opposing forces weighing on this decision to keep or release Paul Pierce.

On the "keep him" side you've got the fact that the guy can still play (when at full speed). There's also a very, very big sentimentality aspect. By that I don't mean just "wanting to keep him around because we like him." I'm talking about ticket buying fans willing to pay real money to see this "non-contending team." We're also talking about pleasing other veterans and a certain coach to stick around longer. We're also talking about future potential free agents watching to see how stars are treated in Boston.

Cap Questions: Can the Celtics sign a max free agent? 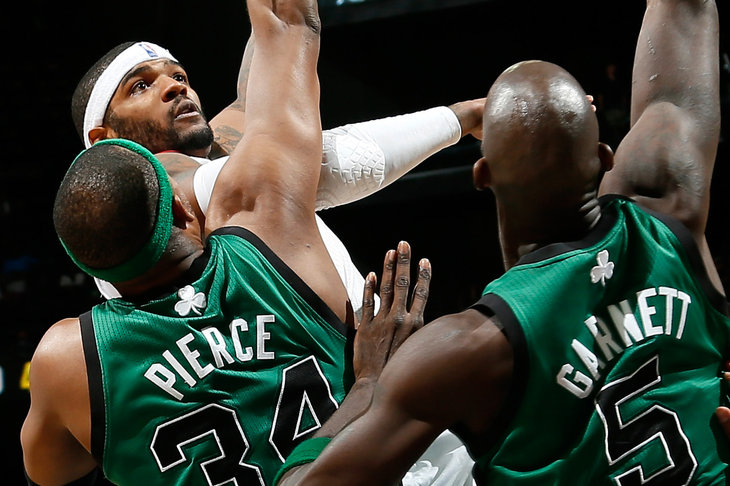 Short answer: Not really. Click for the long answer.

On the "send him off" side you've got money and flexibility. It seems silly to pay a guy $5M to play for someone else, but when it means $10M of cap flexibility it becomes a little easier to understand. Granted, you can't just spend that $10M on another free agent (that would be too easy). But backing off the restrictions and tax penalties can free you up to do a lot more going forward.

Of course there's another option. You can trade him for assets in return. Getting something more directly in return for letting him go would perhaps make the biter pill go down easier with fans and players alike. Of course it takes two to tango and you have to weigh what you are willing to take in return. Sometimes the cure can be worse than the disease (look up the specifics of the Vin Baker trade sometime).

So will Pierce get released? Nobody knows right now. Why is this even being considered? Follow the money. It isn't what we signed up for as fans, but this is the world we live in and root for.

Waiting game: news and rumors on Doc, Pierce, and Garnett