Woeful for Wiggins? The tanking option

Rebuilding is underway. How bad will they get to get better?

Share All sharing options for: Woeful for Wiggins? The tanking option

Welcome to day one of the rebuilding effort. Ubuntu is over. The era has ended. There are still some pieces to be worked out but there's really no turning back now. The only question that remains is just how far the Celtics are willing to go to get better. Will this be a soft reboot or a cold stop and restart?

Could the Celtics get Josh Smith? 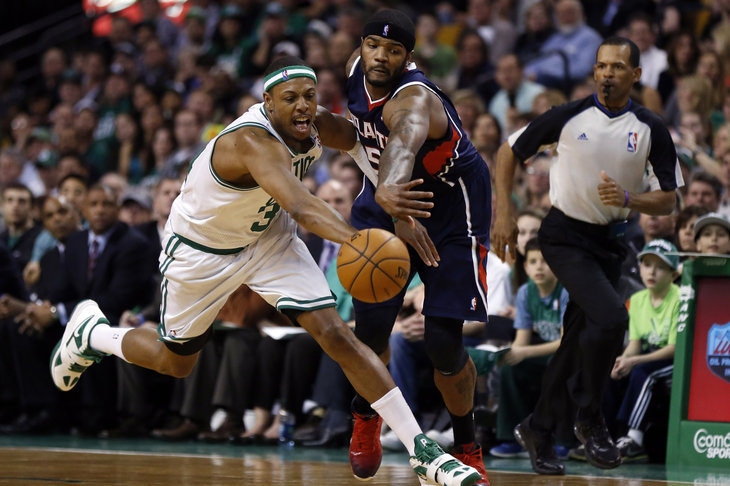 Could the Celtics revisit the Josh Smith, Paul Pierce 3 way trade with Dallas?

The soft reboot would involve looking to add talent however you can. That might mean getting Josh Smith (warts and all) or Al Jefferson (same) or Paul Millsap (same but in a different way) in a sign-and-trade to put next to Rajon Rondo. Those would appear at first blush to be the best case scenarios. Another option would be to gather as many good-not-great players as you can for a chance to couple them together with other assets for a big splash move down the line.

Still, the net result of all that might just end up being an 8 seed and first round exit for the foreseeable future. So you have to at least take a long hard look at the "tanking" option. You don't contend for titles if you don't have a mega-star on your team. Period.

Is it possible that Rondo could become that guy? I suppose. But he also could be one of those great but not THAT great players too. Could Jeff Green reach those lofty heights? I like Green and I see a good career ahead of him, but that just doesn't seem to be in his range.

This week we'll see a "weak" NBA Draft and even before that ends there will be buzz about how great the 2014 draft could be. Andrew Wiggins is just the creme of the crop, but there are other potential franchise changers projected in the top 5 or 6 of next year's draft. That might be worth tanking for.

It seems like a given now that the Celtics will look to move Paul Pierce and Kevin Garnett if at all possible. Yes, you will hear in the coming days that the team is willing to hold onto them for next year and perhaps even wait to dangle them at the trade deadline, but as we've been reminded in the past week, you shouldn't believe everything you hear. Some things are leaked to the press specifically for bargaining position.

Without Doc, Pierce, and Garnett, the Celtics still have a reasonably good young core of players. They will have a rotation of Rondo, Bradley/Lee, Green, Sullinger/Bass, and perhaps a rookie center and/or Melo. I know that the NBA eats young teams alive, so I have no delusions of title contention. But I don't think that's a bottom 5 team in this league. There are a lot of BAD teams out there and all of them have done the math on the 2014 draft as well.

So what would a tanking Celtics team even look like? Some have suggested that Rajon Rondo sit out half the year. Frankly I can't see that happening. He's a competitor and a stubborn one at that. He has his mind set on returning for camp and will either hit that mark or somewhere not long past it. If you have Rondo on your team fully healthy, I think you have a good shot at being a .500 team - which might just get you in the playoffs next year.

As a result, one option you'd have to look at is trading Rajon Rondo. If you can get a 2014 pick from a team other than the top contenders in the league, you have to think about that long and hard regardless of what else you get in return. You could also revisit the DeMarcus Cousins trade option. Yes, he's a bit of a gamble himself due to his attitude, but you can't deny the talent. Besides, he's proven that he can put up numbers on a lottery team.

That's essentially the goal of the rest of the team too. Put up good numbers on a team that has no real hope of winning too many games. Jeff Green could score 20 points a night. Sullinger might average a double double. Shavilk Randolph might average double figure rebounds. Fab Melo would get some serious run and might even prove himself to be worth something. Whomever the Celtics select in this week's draft will get a lot of chances to shine. The whole season becomes a big sorting out of the young talent. Basically the junior varsity playing against varsity competition.

Then if you do score a high lottery pick, you pick out the best of the group to stick with him and bundle the rest to get good veterans to put around them. Basically look at the Presti model in Seattle and Oklahoma City and copy that plan the best you can.

Could it work? It would take a lot of loosing and a lot of luck. But it could work.

So will it be "Woeful for Wiggins in 2014?" Probably not, but if Rondo gets hurt again, I wouldn't rule it out either.