With uncertainty abounding in Boston, Danny Ainge is going to be faced with many questions in the coming weeks. Perhaps at the center of most of those questions will be Rajon Rondo, the all-star point guard who may or may not be the centerpiece for the Celtics as they enter a rebuilding phase.

Share All sharing options for: The Rajon Rondo questions

The Celtics have been finished with their 2012-2013 campaign for quite a long time now, and the plethora of questions surrounding next year's team have only minimally been answered.

Doc Rivers is now slated to join the Los Angeles Clippers, pending the final go-ahead from the league. Kevin Garnett's future is no more concrete than it was when the Celtics bowed out of the playoffs to the Knicks. Paul Pierce seems more and more likely to be shipped out of Boston, whether by a buyout or a trade remains to be seen.

So now, Danny Ainge and the rest of the Celtics front office are faced with questions about the future of the franchise. Front and center of many of those conversations is Rajon Rondo. Is Rajon the player to build around moving forward?

The answer to that question can be tricky. Rondo has two years left on his contract at a pretty reasonable figure of nearly $24.8 million. A decision on his future with the franchise will have to be made then, and Rondo is sure to demand a much larger contract.

And then there's the question of attitude. It cannot be understated how much of an oddball, acerbic figure he has been, not just in the league, but his entire life. He's hard-headed and seems to be tough to get along with at times.

While that's true, he's also shown a willingness to learn, to put his body on the line for his team and his coach. He's grown each year as a player, and although one of his biggest knocks has been his inability to shoot the midrange jumper, he's actually become much better in that area over the past two seasons. Still, he's not a large enough threat to make teams think twice about going under screens.

He's also struggled with injuries at times. Rajon has always seemed to play through a number of nagging injuries, but they've surely taken a toll on his body. He played 68 of 82 regular season games in the 2010-2011 season and 38 games this year. He tore his ACL during a game in late January against the Hawks. Assuming he's healthy and ready for the 2013-2014 season, it's not wrong to wonder if he's going to be a different player in some ways. 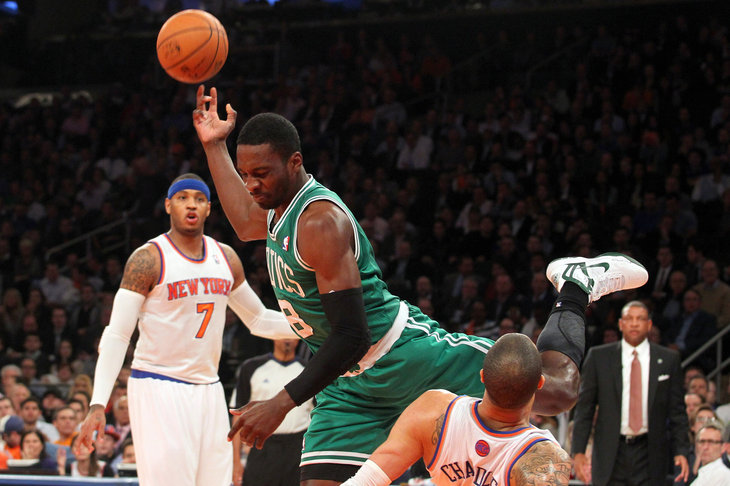 A look at the "tanking" option

Perhaps the biggest hurdle will be how he reacts to whoever is hired to come in and takeover the Celtics' rebuilding efforts. The offense will almost assuredly change (given that, well, Doc Rivers' offensive system left much to be desired), and Rajon's going to have to lead the charge in that makeover.

He may have to display more of a get-out-and-run mindset, something Rivers tried to instill in the team this past season. His role may not be the same as it was with Doc, where he was trusted to make the calls and oftentimes dribbled, organized his guys, moved through screens and made a pass to whoever was in their spot and open.

How he responds to all of those factors will play a large role in deciding how the franchise chooses to move forward at the point guard spot.

All of these questions are things that Danny Ainge will eventually have to consider. The Celtics front office has never been shy about offering Rajon in various trade scenarios, and if Ainge is really focused on rebuilding in a quick manner, the same will likely be the case this year. But until that time, regardless of Kevin Garnett's decision to either retire or return to Boston, Rajon is the player of the future for Boston.

Until a clearer sense of direction is in plain view for Boston's rebuilding process, Rajon Rondo is the only viable option to build around moving forward.

Depending on how the Celtics fare in the 2013-2014 season, the path they choose in their rebuilding phase could change completely. Everything Danny Ainge can see is viewed as an asset to the team, and if he finds a chance to hasten the rebuilding process, whether through the draft or a blockbuster trade, he'll try to find a way to make it happen. If that means trading Rondo, then so be it.

For now, he's still the quarterback of Boston's offense. Rondo, as tough as he is to understand, is still arguably the most important factor to Boston's success moving forward. It only makes sense that he's the player the Celtics aim to build the franchise around over the next few seasons.