Kevin O'Connor gives his rankings of the top 50 prospects in the 2013 NBA Draft.

With the Doc Rivers saga behind us, we now look forward to the 2013 NBA Draft, which begins Thursday at 7:30 PM EST on ESPN. This article will outline the top ten players that I think could be drafted by the Boston Celtics with the number 16 pick.

Some of these players I would be ecstatic to have on the team next year, but there are some others I would scoff at. In both cases, I will briefly outline the positive and negative attributes of each player, along with their fit on the potential roster. For in-depth reports on each player, refer to my top 10 position-by-position lists and full scouting reports, both of which will be linked at the bottom of the article.

I'm always curious to know what the readers think of the draft, so be sure to follow and tweet me @Kevin__OConnor with your thoughts or leave a message in the comment section below! 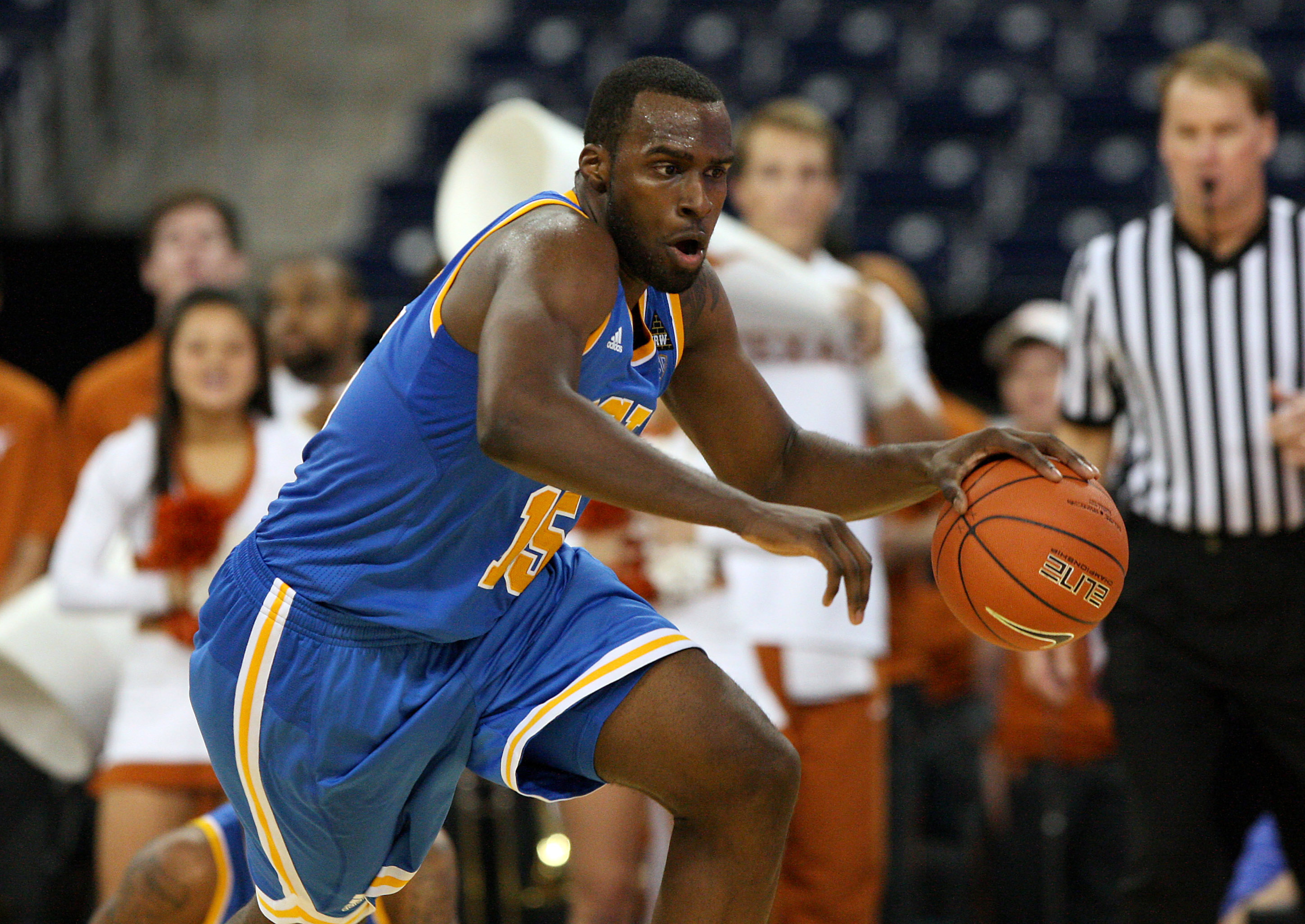 Shabazz didn't meet his expectations with UCLA but he did show that he has potential as a very good scoring wing. The problem with him is the fact he didn't do much else and has character issues off the court. Shabazz isn't a willing passer, averaging only .8 assists per game, and he isn't exactly an elite athlete either. However, his versatility as a scorer means he has the potential to be a valuable piece in the future.

Shabazz Muhammad would be a great potential draft pick for the post-Paul Pierce era. Even though Jeff Green is a quality player, he isn't one of those guys you give the ball in end of game situations. Muhammad has a killer instinct and has already proven he can come up big in games with UCLA. If Shabazz Muhammad can improve the other aspects of his game, he could be a quality wing for the Celtics.

European Stats: 12 PPG, 40 3PT%, 3.2 APG, 2.53 TPG
Before Dennis Schroeder makes his way to the NBA, he will need to spend more time developing overseas or in the developmental league to work on his plethora of skills. Schroeder has drawn comparisons to Rajon Rondo because of his potential as a passer and "coach on the court." He has a solid jump shooter and should continue to improve that aspect of his game. With more refinement, Schroeder could become a great NBA point guard.

There have been multiple reports that the Boston Celtics made a promise to Dennis Schroeder, and while that could be a smokescreen, there is no denying there is interest since he worked out for the team. If the Celtics eventually moves on from Rajon Rondo, Dennis Schroeder could be a cheaper and younger option to run the offense in a couple of seasons. 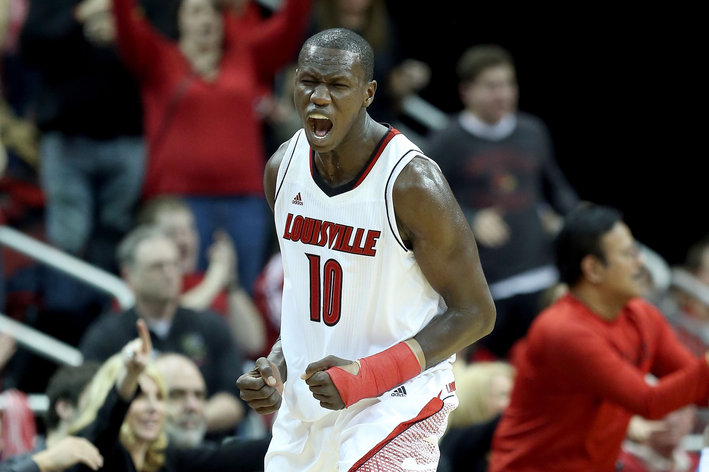 I consider Gorgui Dieng to be one of the safest players to draft at the center position this year. Dieng is projected to be drafted somewhere in the early 20s, but selecting him at number 16 would not be a reach. At Louisville, Dieng proved that he was an amazing defensive player, performing very well in pick-and-roll defense and on weak side help. Dieng is a terrific shot blocker, averaging 2.5 blocks per game, and that skill should carry over to the NBA.

Dieng would immediately get time in the Boston Celtics' rotation. He has the body to play in the NBA and can do enough offensively to not be a liability on that end of the floor. He sets very strong screens, making him a threat in the pick-and-pop with Rajon Rondo.

College Stats: 14.5 PPG, 47.9 FG%, 4.6 APG, 2.0 SPG
Admittedly, I wouldn't be overly excited if the Celtics drafted Shane Larkin. Chad Ford reports the C's have a lot of interest in him and they worked him out, so it's a definite possibility. Larkin was a terrific scorer at Miami, shooting 40.6 percent from beyond the arc. He is a very good scoring guard but was also a great man-to-man defender with his 2 steals per game. 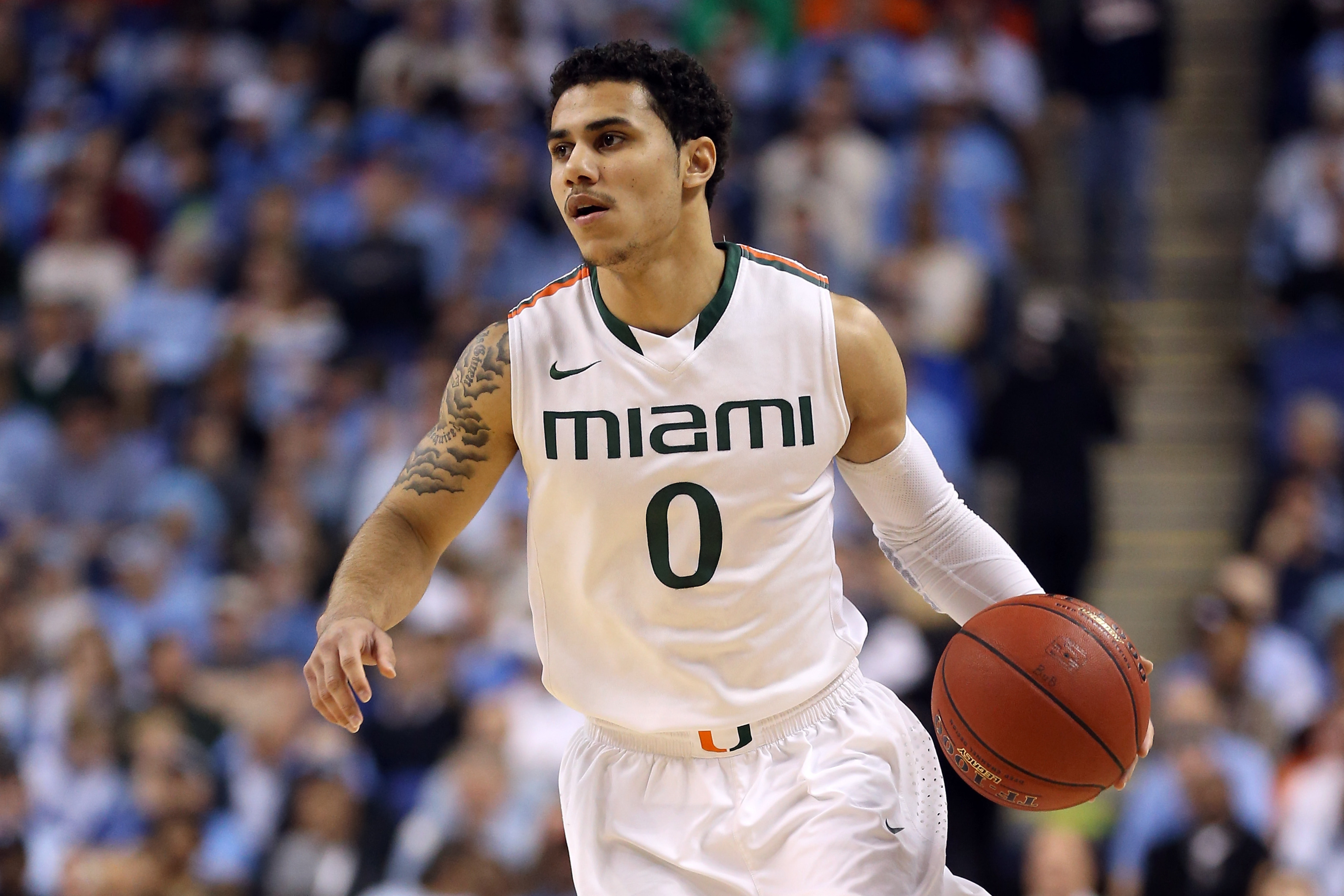 The problem with Larkin is his length -- or lack thereof. Larkin only has a 5'11.75" wingspan and 7'5.5" standing reach, making him one of the smallest players in the NBA. At a position that requires length to be able to create separate between you and the defender, I'm not sure if he'll be able to come close to the same amount of success at the next level. There is no denying his pure basketball skill, but I question how high his ceiling is as a player.

College Stats: 17.8 PPG, 62.9 FG%, 7.3 RPG, 1.7 APG, 1.1 BPG
Kelly Olynyk could easily become a quality sixth man scorer in the NBA. He can score in a number of ways, either on the drive, on catch-and-shoot situations, and from the perimeter. Not to mention the fact that Olynyk has some of the most advanced post moves out of any player in the draft. The reason why I'm not so high on Olynyk is because he's not a very good defensive player, which is the aspect of his game that could hold him back from being a starter in the long run.

Olynyk would be an interesting player to pair with Jared Sullinger since "Sully" is more of a banger inside and Olynyk will likely be on the perimeter. Yet, you do have to wonder if there is enough defense in that pairing to be effective in the future. There's no denying that Olynyk's scoring ability would be valuable this season if the C's are looking to compete. 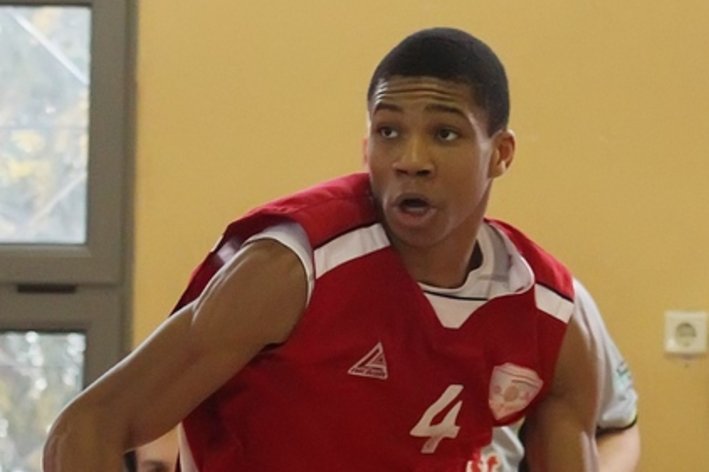 Considering Giannis Antetokounmpo is the youngest prospect in the draft, he has a long way to go before reaching the NBA, but the tools are there for him to be a very good player on both ends of the floor. Giannis played a point forward type of role in Greece, showing off very good ball handling and basketball I.Q. for a player his age. He is a very solid scorer and can finish both at the rim and perimeter.

It's hard to get a handle on Antetokounmpo's stock. A team could easily take him in the lottery due to his talent, but he could drop to the 20's because of the amount of risk drafting him. He would be a high risk/high reward selection by the Celtics but could be a good piece to have for the coming rebuild.

College Stats: 7.2 PPG, 57.1 FG%, 6.3 RPG, 2 BPG
At only 19 years old, Steven Adams has the body of a fully developed NBA center. However, the native of New Zealand has a long way to go in his growth as a basketball player. One concerning aspect of Adam's game is the fact he had a hard time handling passes in college. I think that could limit his potential on the offensive end, even if he develops as a more efficient scorer the perimeter. Regardless, Adams' greatest potential is on the defensive end of the floor, where he could become an elite shot blocker once he develops more true big man basketball skills. 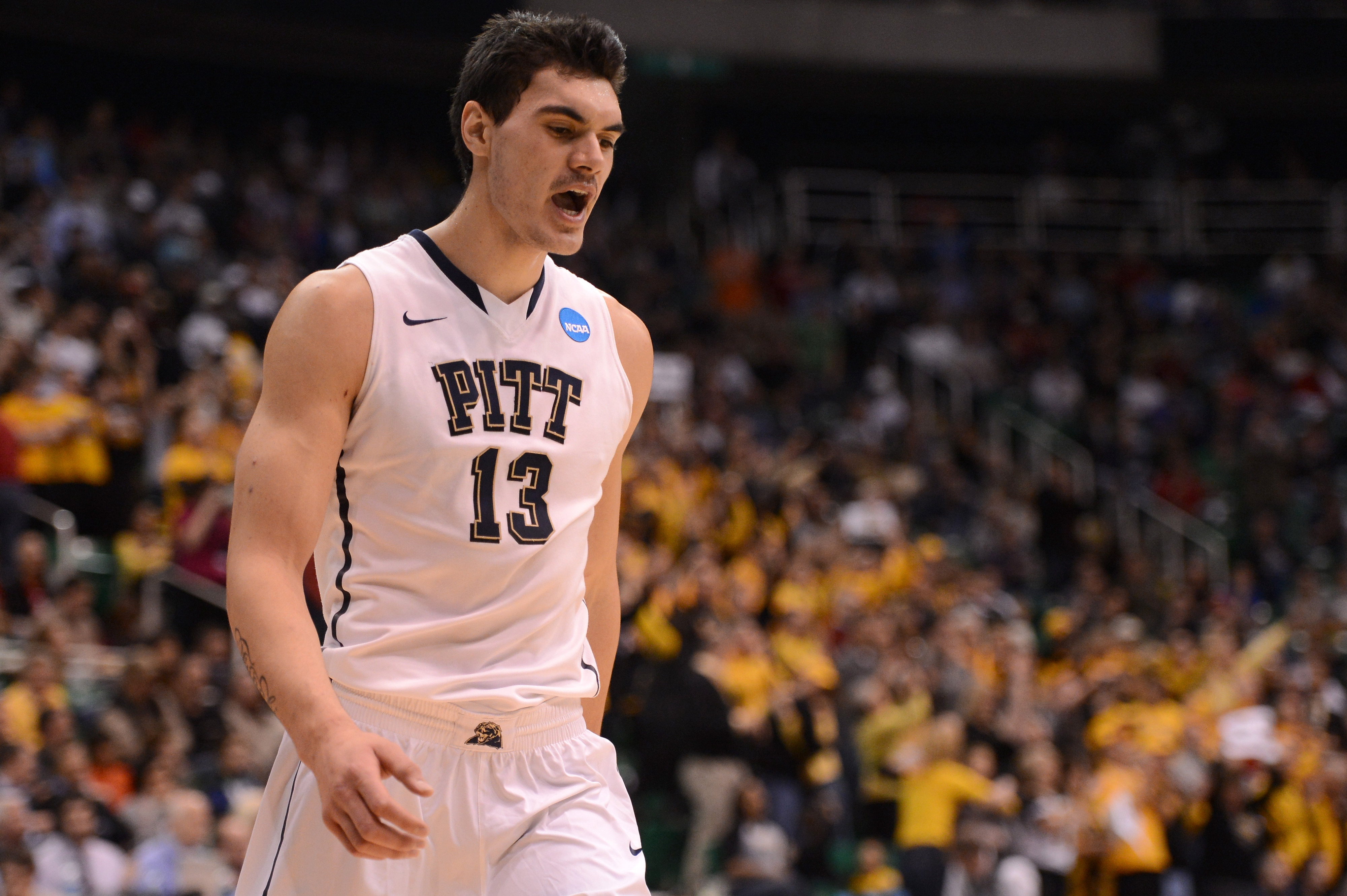 Adams is expected to be picked in the lottery, but there is a chance he slips because he is so raw. Steven would be a development project much like Fab Melo already is, but he might have even better tools for his future. If Steven Adams is drafted, expect him to start his career in the developmental league, where he will continue to polish his game.

College Stats: 17 PPG, 49.1 2PT%, 9.5 RPG, 1.6 SPG
If it weren't for his lack of a jump shot, Jamaal Franklin would likely be a top ten pick. Franklin is one of the most energetic and intense players on both ends of the floor. Offensively, he's a high flyer that makes many exciting plays in transition. On defense, he is a terrific man-to-man defender that also has the athleticism to pick off passes when playing off-ball.

Franklin is ready to be a role player but must make sure he is not a liability picking up fouls. His aggressiveness can sometimes work against him, so some refinement could be needed there. The Boston Celtics tried to workout Franklin earlier this month but he had to withdraw with an ankle injury. 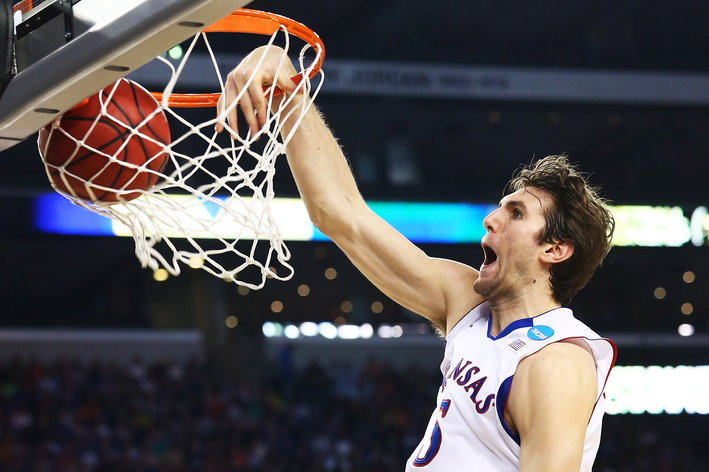 I think Withey deserves to be drafted right outside the lottery based on the fact he will be a great shot blocker in the NBA. He's a very good defensive player that has the body to compete with most centers at the next level. Withey's offense needs work but his success at the free throw line suggests that he will continue to develop his mid-range jumper. He's already very explosive finishing at the rim, so he could be a threat in both the pick-and-roll and pick-and-pop.

The Boston Celtics worked out Jeff Withey earlier this month and I'm sure the team has hopes that he could become a Kendrick Perkins type of role player. Withey won't be exactly like Perkins, but he could make a similar defensive impact in a different way. He can play right away and still has room to get better in the future.

High School Stats: 23.4 PPG, 6.2 RPG
Ledo has the talent to be a lottery pick but many question marks about his character have dropped his stock to the middle or end of the first round. Quite simply, Ledo can do it all as a scorer. He has very good handles, can finish with either hand in the paint, and is a terrific shooter from all parts of the floor. Ledo is risky because of his major character concerns and lack of experience against college competition. Ledo has played at a high level in workouts and in high school, but he has not proven himself in actual college games. Ricardo Ledo is one of your true high risk/high reward players in this draft.

Once the Celtics move on from Paul Pierce, they will lack a scorer that they can go to at the end of games. Ledo has the potential to be that type of player, though it will take some time for him to develop his game. Ledo is probably best served to start his career in the developmental league but I think there is a chance he could find himself in the NBA sooner rather than later.