Sorting through the feelings of watching Paul Pierce leave

Forgive me if I ramble. I haven't really had a chance to write about my "feelings" after the trade yet. This is the way I work things out, I write. If you enjoy it or derive some benefit from it, that's a bonus. If not, well, thanks for humoring me.

Share All sharing options for: Sorting through the feelings of watching Paul Pierce leave

I don't live in the Boston area anymore, but everyone knows I'm a Celtics fanatic. This morning in Church, I had multiple people walk up to me saying "are you ok?" It took me a second to figure out what they were talking about, but then I realized they were talking about The Trade. Bless their hearts, they were legitimately worried about me. It was akin to being treated like I lost a family member. I suppose in a manner of speaking I did. But then again, when I step back and look at my wife and children and think about my real extended family, I know it really isn't like that at all.

Paul Pierce is probably my favorite athlete of all time. I grew up on Larry Legend and I respect all the other legends before him. I appreciate all that Kevin Garnett did for this city and franchise. But I grew up with Paul Pierce, which I detailed in this article (that I'm really quite proud of). Seeing him pull on another team's jersey is not going to be easy for me.

But lets keep in mind, Paul Pierce has not passed away. He's a millionaire hundreds of times over that has just had his contract guaranteed for an extra $10M. He had stated in the past that he didn't really want to be part of a rebuilding process. While he would have enjoyed retiring as a lifetime Celtic, he was fine with playing for another team for the last year or two of his career. As a bonus, he's going to a situation where he'll be on a contender. If all things fall right, they might even make a run at the Heat. Or said another way, injuries happen, and if one derailed the Heat, the Nets could be one of those teams that could take advantage.

All of which is to say that Paul Pierce is going to be just fine. He even has a plan to sign with the Boston someday (even if it is just a one day contract) so that he can retire a Celtic. I could even imagine him sticking around as a coach or maybe even an executive someday. Or perhaps he'll want to go into broadcasting or something along those lines. He's a basketball junkie so I can't really imagine him not being around the game. Plus there are charities and causes that he can pour more time and energy into if he chooses (Truth On Health for example). Regardless, he's a grown man and he's got a long prosperous life ahead of him.

What about the fans? If we want to watch him running up the parquet in green and white, we'll have to pull out the DVR or our 2008 Championship videos. We could have run him out there for one more year and that would have been nice on some levels. But to what end? To watch him struggle on a team that would be pretty good but not great? Would that have been worth it? Again, part of me says "yes, for loyalty, for pride, for tradition, it would have been worth it." Another part of me thinks "well, it had to end sometime. Perhaps it is better to rip off the band-aid quickly."

It might end up being a great thing for the franchise if everything falls just right. If the Nets and Clippers find a way to implode in the next few years, those picks could become very valuable. If Danny Ainge can cobble together his many assets to recreate some of that Summer of 2007 magic, that could be pretty fun too. On the other hand, it might just end up being another deal. The shifting and shuffling of the deck as this team competes with 29 other teams to win a Championship year in and year out.

Either way, I'm certainly not going anywhere. I've lived my whole life as a Celtics fan and I will die a Celtics fan. I never thought there could be someone to push Larry Bird off the pedestal in my heart (and the 11 year old in me will always keep him there) but along came Paul Pierce. It is hard to imagine another player staying in Boston for his whole career (or rather, for 99% of it as the case may be with Pierce), but there may be another player that will come along and capture my heart the way that Larry and Paul did. 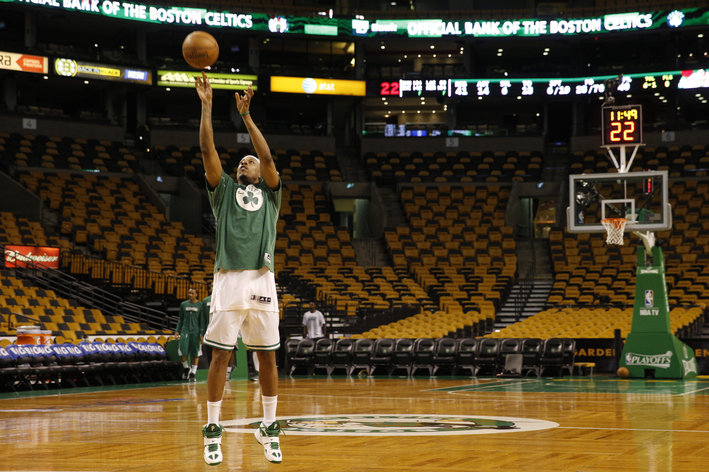 Rajon Rondo might have what it takes to get there someday, but he's going to have to keep maturing and win another title or two first. Either way, it isn't really even fair to put that kind of pressure on a 27 year old for that. Legends grow over time, they aren't anointed or manufactured.

So the legend of Paul Pierce ends with him being traded in his final year or two. That's not the way I would have developed the story, but it isn't my book to write. But it does not subtract one single memory from my heart. It does not diminish the respect and adore that I have for Pierce. He is and will always be a Celtic, regardless of what jersey he wears in the next couple of years.

What I can do, and really what I've already started doing, is focus on what the next era will bring. What's the next move, the next plan, the next chapter in the story. I dig that kind of thing and if anything this is already the most interesting summer since 2007. What happens next is critical to how long we'll have to wait until we are at the top of the mountain again. The pages are blank and that story is yet to be written.