Kevin O'Connor gives his rankings for the top ten centers in the 2013 NBA Draft.

The NBA Draft is so fun, isn't it? I would imagine that scouting the draft as a general manager or scout is in one of the most stressful and exhausting aspects of their job. But I am willing to bet that despite all the long, sleepless hours they spend examining these players, they would agree with folks like you and I that the draft is flat out fun; that's what truly motivates them to work so hard. It's also what makes fans spend so much time learning about these players with the hopes that our favorite team selects them on draft night each and every year.

When I rank and assess players, I try to focus on five broad categories. Click on the 'buttons' to reveal my reasoning for each one.

This means that sometimes I will rank a player that has proven he has talent over a player that simply has potential. While potential is a nice thing to have, there have been so many players that come into the league with "potential" that never really pan out. There is no such thing as a "safe pick" but there is such a thing as drafting someone with a "high probability" of being a quality player.

Which leads me to this. Some players dominate in college but it never translates to the NBA. Why is that? I look at the level of competition but also the way they were able to gain success. To make a football comparison, some quarterbacks win the Heisman yet go undrafted in the NFL. They are slow to read the player; that may work in college but not the NFL. The same applies to some successful college point guards that don't make it in the NBA. For a big, he may only play well in college because he's bigger and stronger than everyone else, but not the NBA.

Some players explode when they are on the court...in a good way. Whether it's blazing speed, elite change of direction ability or elastic-like reach, some players just stand out from the others. In terms of basketball skills, International prospects can be hard to judge considering the limited footage available and the level of competition they are facing. Regardless, if you look at an individual player, there are obviously some skills that pop out in regards to the others.

Every player has weaknesses; some are more easily correctable than others. For example, shooting strokes seem to never change. If someone is terrible at shooting in college, chances are they will not get drastically better in the NBA. It's rare to see a player go from bad to great over the course of their career. It happens, but not so often. On the other hand, a player might have success from the free throw line but not take many jumpers in college. The success at the line is a sign that they can develop a mid-range game.

Players that were team leaders or have proven to be "good kids" get a plus in my book over slightly more talented players that are trouble makers or don't have much of a work ethic. Yes, so that means the players that are totally lazy, don't work hard, haven't improved much in college, have trouble off the court or are just downright not smart, get a downgrade. That is not to say these players won't be successful, but I'd personally rather take my chances with a player that works hard and wants to succeed over one that might be more talented but takes his skills for granted.

With all of that in mind, here is my top ten center prospects in the 2013 NBA Draft.

Analysis: Noel is incredibly raw offensively, undersized defensively, and is coming off an ACL injury...so how is he number one? Well, it's all based on his enormous upside. Noel flat out has the potential to be the best defensive player in basketball. His shot blocking ability is unparalleled in this year's draft and it's hard to ignore. He's also a hard worker and athletic enough to develop a solid offensive game. Even if Noel never pans out offensively, it's a sure thing that he'll become a Defensive Player of the Year candidate. In my eyes, that warrants the number one spot, despite any other concerns about him.

Analysis: I believe Len is one of the more underrated players in the draft. He's not elite in any single category but he is good everywhere. He's solid on the post, passes well, has a good mid-range jump shot, and is pretty good on the defensive end. He's long and has a lot of rebounding potential too. If he continues to add strength he will become even more of a force in the paint. He doesn't have the same upside that Noel has but he should be a good player in the NBA. If he had been more of a focal point in Maryland's offense and had the same level of success, I believe I would have ranked him ahead of Noel by a hair. 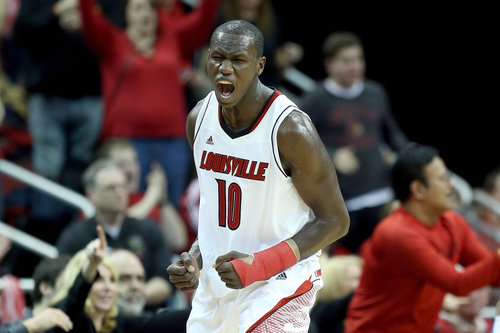 Analysis: Dieng is one of my personal favorites in this year's draft, since he has the potential to be a great shot blocking enforcer in the paint for many years to come. He is also a high character individual that is willing to work hard and get better at his game. I also feel that his offense is very underrated by many draft pundits. For one, he's terrific at setting screens and has proven he can finish at the rim at a high rate. But he surprisingly has developed a consistent mid-range jump shot that should make him a threat in both the pick-and-roll and the pick-and-pop. I believe Dieng is one of the safer players to draft but he still has the potential to become an All Star in the future, as well as an All-Defensive Team player. 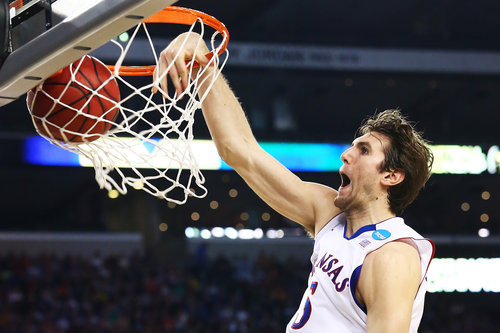 Analysis: At 23 years old, some feel Withey has reached his peak as a basketball player. Really? It seems to me that most players reach their prime at 27 or 28 years old. Withey is already a great player on the defensive end with room to get much better. He's not that quick footed but has room to improve defending the pick-and-roll. He's already a great shot blocker with supreme instincts in helping from the weak side. Withey needs to make the biggest improvement on the offensive side of the ball since he hasn't proven he has a reliable jumper. Jeff has had success at the free throw line so there is a good chance that translates to a success mid-range game. Regardless, Withey is still a threat in the pick-and-roll because of his elite finishing ability at the rim.

Analysis: Who? Yeah, the 7-footer from Brazil is a pretty unknown player in this year's draft. This might sound outrageous but I believe if he were on Kentucky, like Nerlens Noel, he might be considered a top ten pick in the draft. Like Noel, he's extremely explosive on the defensive end and has the potential to be a stud shot blocker, but he also is far too lanky to defend and rebound at a high level. His offensive game, like Noel, is raw and he rarely scores outside of put back dunks and alley oops. At this point, his game is nothing but potential since he plays far too softly to be an immediate threat in the NBA.

Analysis: When it comes to basketball skills, Olynyk is basically the total opposite of Jeff Withey. Olynyk has a great jump shot and has some advanced post moves. He's fantastic at finishing at the rim and will likely be a good spark plug on offense in the NBA. On the other hand, his defensive game is nonexistent and he lacks the athletic tools to improve there. He's also not very good on the boards and gets pushed around despite his size. The only reason he gets a nod over some other players is because he has proven himself against a high level of competition. Plus, athletic bigs that can score in multiple ways are always needed in the NBA.

Analysis: Mike Muscala has yet to prove himself against high-level competition and struggled in his single NCAA tournament game but he certainly has skill, averaging a double-double last season. I feel he gets a bad reputation since he's a Division II prospect and not an International prospect. If he were from say, Greece, he would be considered a top 15 pick due to the "mystery" of his potential. Muscala is a fluid big man with a plethora of moves on the post. He also is very good at draining shots between 12-to-18 feet, making him a pick-and-pop or spot up threat. He is solid on the defensive end but needs to continue to fill out his frame so he doesn't get out bodied. Muscala might take time to adjust to the level of competition but I think he has the tools to become a quality rotational big in the NBA.

Analysis: I'm really not as high on Steven Adams as most people are. Sure, he has the body...but what else? He has absolutely no fundamentals on offense or defense and has a long way to go to be a part of an NBA rotation. Right now he is nothing but potential...yet has he even proven that he has high upside? Offensively, he has stone hands and has hard time catching some passes, making him a liability on that end. That won't change. He has all the physical tools to be a great defensive player yet he lacks any understanding of team defense, is indecisive in the pick-and-roll, and doesn't box out when rebounding. He's just far too undeveloped right now for me to rank him any higher. The only reason he gets this ranking is because he has a true NBA body at only 19 years old.

Analysis: Gobert's stock has dropped like a rock and rightfully so. Everything that was said about Steven Adams applies here...except Gobert looks like a twig when he's out there on the court. In order to be a great paint enforcer in the NBA, like he was in France, he will need to fill out his frame. He has an alien-like 9'7" wingspan, but lacks the strength to play against the big boys of the NBA. I'm not so sure that he even has the frame to put on that much more muscle, making him a potential Ryan Hollins or Patrick O'Bryant.

Analysis: Jaiteh is a longterm project that should be left to develop overseas or in the developmental league. At only 18 years old, he is very close to already having an NBA ready body. Watching Jaiteh, I see a player that has very soft hands is and able to quickly "find the blue sky" when going up for a basket. He seems to have good basket awareness for his age and he'll only get better. Though he isn't very athletic, he knows how to use his body and create a shot down low. He's raw and not very aggressive, but he looks like he has the tools to someday be a solid rotational big man in the future. With the patience and proper training, he should be able to apply his tools on the defensive end as well.

What do you think of the centers in the draft this year? Please comment below or follow and tweet @Kevin__OConnor with your thoughts. Also be sure to let me know what players you'd like to see profiled next!
Follow @Kevin__OConnor
CelticsBlog.com 2013 NBA Draft Player Profiles:
| Gorgui Dieng | Mason Plumlee | Jeff Withey | Myck Kabongo | Giannis Antetokounmpo |