Point guard Phil Pressey earns an invite to training camp as the Boston Celtics fall to the Houston Rockets, 85-78.

Led by power forward Terrence Jones, the Houston Rockets defeated the Boston Celtics 85-78. Jones had 17 points and 6 rebounds but his adversary, Kelly Olynyk, matched him by scoring 19 points on 8-of-14 shooting, to go along with ten rebounds, two assists, two steals, five turnovers, and seven fouls. From the opening tip, fatigue was the story of the game with sloppy play by both teams. Phil Pressey is one player who didn't seem too worn-out, he impressed with ten assists and some tenacious defense on his opponent, Casper Ware. A day off on Thursday will benefit the Celtics before the play in their fifth and final Summer League game on Friday. Click here for the full box score.

Both teams were not sharp this afternoon. Boston played their fourth game in four days and had seven straight days of work including practice. Houston had Monday off but they looked quite tired as well. Boston and Houston combined for 41 fouls, 36 turnovers, 41 offensive rebounds allowed, and a 37.5 shooting percentage from the field.

Fab Melo had easily his worst game of the Summer League, playing only ten minutes with no rebounds and two bad fouls. Meanwhile Colton Iverson impressed with five points and eight rebounds (six offensive). Both players appeared fatigued but Iverson managed to have a lot more success than Melo.

Many of the offensive rebounds in this game (24 for Houston, 17 for Boston) were due to the lack of a box out or a fortunate bounce. For the most part, I don't think many of them were due to an effort play in the form of crashing the boards. I don't have an exact count, but I believe Houston had at least four offensive rebounds after a missed free throw, which is a completely inexcusable number.

But can you blame these players? These are hard times. With seven straight days of action, even the greatest athletes in the world are bound to get tired. I'd look for the Boston Celtics to rehabilitate tomorrow and come back on Friday with a much more valiant effort.

Today was by far Phil Pressey's most encouraging game of the Summer League. Even though Pressey only shot 2-for-9 from the field, his ten assists and three steals brought the energy and pressure that the Celtics need in a backup point guard. Danny Ainge obviously sees the potential too, since he told CSNNE.com that Pressey has already received an invite to training camp.

CSNNE.com
Danny Ainge tells CSNNE.com that there are a handful of players that are still under consideration, but there's only one from the non-guaranteed contract cartel who already has an invite locked up: Phil Pressey. "Yes I do anticipate him being in training camp," Ainge said. "Phil has played really well. He's been fun to watch."

The highlight of the game came with about five minutes to go in the first quarter. On a switch, Pressey had to close out hard on a three-point attempt by Houston. He hustled hard and disturbed the shot, forcing a miss. Boston grabbed the rebound and the ball was hustled up the court before it was passed again to Phil Pressey, who somehow was ahead of everyone even after his close out. Pressey received the pass and quickly batted it to a wide-open Kelly Olynyk, who hurried in transition to finish the play with a layup. On both ends of the floor Pressey managed to show off his speed, intelligence, and intangibles.

Phil Pressey also had a few no-look passes for assists (by my count he had three) that would receive a stamp of approval from Rajon Rondo. Pressey played in control, forced the pace, but managed to play with his teammates and not force them to play only at his speed.

I thought Rockets point guard Casper Ware had a terrible game because of the amount of pressure Phil Pressey applied on him. Whether it was his full court defense or his incredible lateral speed to stay in front of Ware, Pressey was there. Pressey might need to be a bit more consistent on offense (like he was today) but his defense has been impressive from the start of the summer to today.

I think it's time to talk about one of my pre-draft concerns with Kelly Olynyk. I will go more in-depth on Olynyk sometime after the Summer League is over but I wanted to touch on it now because I thought today's game provided us a glimpse at some of his deficiencies that we will see on a more consistent basis in the NBA. 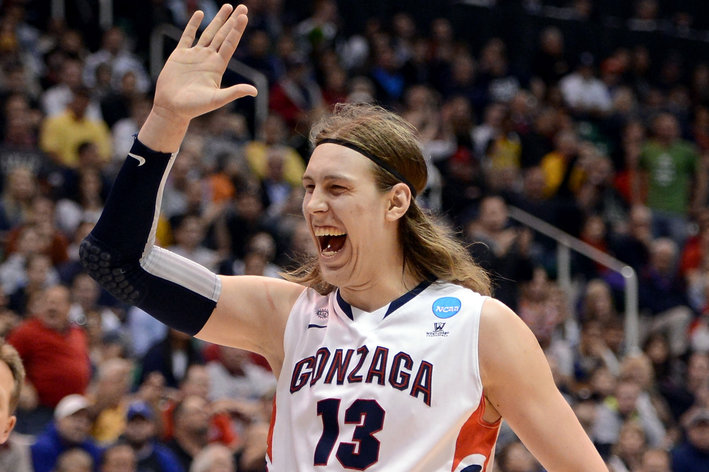 On my one of my "top ten lists" I published earlier this year, I said, "his (Olynyk's) defensive game is nonexistent and he lacks the athletic tools to improve there. He's also not very good on the boards and gets pushed around despite his size." While I was a bit hard to call his defense "nonexistent," I do believe my full scouting report (embedded to the right) was fair.

This afternoon, Kelly Olynyk faced off against Terrence Jones, the Houston Rockets' first round draft pick last season. According to DraftExpress.com, Jones is a 6'9" power forward that has a 7'2" wingspan and a 34.5 max vertical. Olynyk stands at 7'0" with a 6'10" wingspan and a 29.5 max vertical. Before the draft, I had believed that Olynyk's lack of athleticism would hurt his chances of becoming a fulltime starter in the NBA. The first three games of summer league didn't have many instances where these concerns could appear but Jones brought them into focus today. I don't think Olynyk played badly today -- in fact, he was very impressive offensively, but we already know that about him -- I just think some weaknesses showed up on the other end of the floor.

At the 7:35 mark of the first quarter, Houston missed a free throw and Olynyk properly boxed out his man, Terrence Jones. But Jones, a much better athlete, applied some pressure to Olynyk's back, pushed him out of the way, and then had the length to elevate over him to grab the offensive rebound. Will this happen all the time? No. But it's a concern. Kelly only averaged 7.3 rebounds per game in college because of his short arms and lack of elite athleticism; this is why he wasn't a top ten pick despite all his amazing tools on the offensive end of the floor. 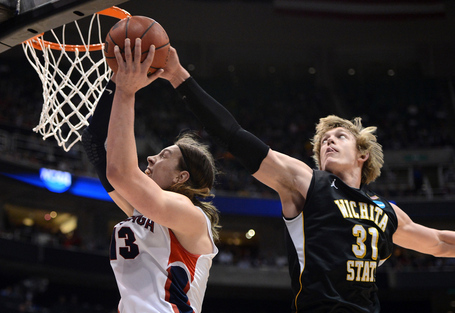 With about six minutes to go in the first half, Terrence Jones received the ball the ball at the top of the key and quickly dribbled to his right. Olynyk, who struggled with his lateral speed in college, got beat badly by Jones and drew a foul to get to the free throw line. This is one of my fears and why I believe he is better off as a star sixth man (where his offensive skills can be highlighted and his defensive weaknesses can be forgiven) instead of an above average starter (where his offensive may be stifled and his defense magnified).

Olynyk's only a rookie and it's only his fourth Summer League game, but if we're going to spend so much time discussing how incredible he could become offensively, it's worth talking about how concerning his defense could be. If Kelly Olynyk is getting beat by the likes of Terrence Jones, another young and undeveloped player, I am worried about him having the athleticism to defend the developed and extraordinarily athletic stretch power forwards in the NBA.

- Even though he has almost no chance to make the Boston Celtics' final roster, Tim Abromaitis was a lot of fun to watch today. He fought hard and got a lot of results that might catch the eye of another team looking for depth. He was only 2-for-7 from behind the arc but he displayed a picture-perfect shooting stroke. Tim also had two steals and I believe the team played better when he was on the court because of his fundamentally sound defense.

- Jayson Granger isn't a point guard on offense and I'm just about ready to shovel him strictly into the shooting guard position. Defensively, sure, he can effectively defend both positions, but he doesn't have the skills to be a point general. Granger makes far too many risky passes and is loose with his dribble. NBA-level point guards would probably destroy Granger by applying pressure on him. Unfortunately for Granger, he's only 6'2", so he doesn't have the size to play the two-guard, and he doesn't have the outside shot either.

- I wish small forward Courtney Fells would get more playing time. He started and got 24-minutes today but I still would like to see more. I think he plays absolutely terrific defense, in large part due to his gifted athleticism. He's only 6'6" but has a long 7'1" wingspan. Combine that with his great lateral speed, I think he has the potential to be a defensive stopper in the NBA. He can defend the two, the three, and it's possible he even has the speed to stay with many point guards. Fells also has a pretty good spot-up three-pointer and has the athleticism to finish hard at the rim. Today he received an alley-oop pass from Phil Pressey and finished it with a thunderous dunk.