Brad Stevens is the NBA's next great head coach

Share All sharing options for: Brad Stevens is the NBA's next great head coach

Never in my wildest dreams did I imagine the Boston Celtics would be able to grab Brad Stevens away from the tight grip Butler University had on him and he had on it. For the past six years, Butler has been blessed to have one of the greatest young coaches in college basketball -- no, not just a young coach -- but one of the greatest coaches in college basketball, period.

Somehow Danny Ainge and the Celtics pulled it off.

The attraction of coaching one of the supreme franchises in the history of sports, a six-year deal worth $22 million dollars, and a bright future was enough to lure him away.

Brad Stevens is the perfect fit for this team and I'm putting this on the record: I believe Stevens could quickly become one of the best coaches in the world.

It might seem a little premature for me to make that declaration about a coach with only six years of head coaching experience -- at the college level, no less -- but he has all the tools to become one of the greatest. Like college athletes, hours and hours of scouting go into predicting the ceiling of each player. With coaches the same can be said.

That's why Brad Stevens was the Celtics' number one choice and has been on their list of potential successors to Doc Rivers for quite a long time now. That's why fans of college basketball are distraught over losing him to the NBA after expecting him to be the next "Coach K."

I believe Brad Stevens is brilliant hiring by the Boston Celtics for many reasons, but mostly for his ability to unite his team, his analytic approach to the game, the respect he has received from his coaching peers, and his style of defense.

"We Not Me" Philosophy

Ubuntu is a term that many Boston Celtics have become familiar with over the years. Essentially the word means, "I am because we are." At Butler University, Brad Stevens created his own keys to success in the form of a pyramid. Within the pyramid there are four categories, from most to least important: Character, Preparation, Performance, and Results.

When asked about this philosophy Brad Stevens said, "The only thing we talk about is the process. We always say win the next game one possession at a time. You can have a goal of winning a National Championship or getting into the Final Four, or whatever the case may be. But it's baby steps, there's a process to get there and the focus has got to be on that." 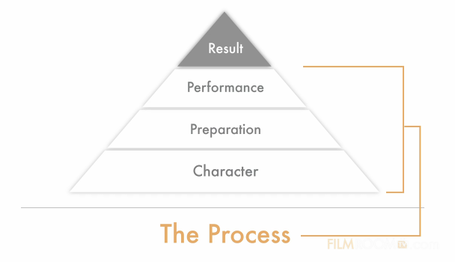 The first and most important part of the pyramid is Character. Butler tradition has had something like this for years called, "The Butler Way." The five principles of that are: humility, passion, unity, servanthood, and thankfulness. According to ButlerSports.com, "The Butler Way demands commitment, denies selfishness, accepts reality, and yet seeks improvement everyday while putting the team above self."

Next is Preparation: "In basketball, we look at it like it is life by inches or death by inches," Stevens said. "There are 150 possessions per game. It may be one or two possessions one way or the other." Butler has been known as one of the most well prepared teams in recent years, so it should come as no surprise that preparation has been stressed so much.

The third tier is Performance. Brad Stevens describes this as simply, "doing your job." New England Patriots' head coach Bill Belichick has often been heard saying the same exact thing. Basically, it means doing your specific job over the course of the game and performing as best as you can.

The last part of the pyramid is Results. Stevens says, "Be sure to care about the work and do everything you can to promote character, pay attention to details, expect great performance and let the results take care of themselves."

Sounds a lot like Ubuntu, yes? I'd say so. Team unity is something that Brad Stevens built at Butler and something I believe that he will bring to the Boston Celtics as well.

Since Brad Stevens was hired as the head coach of Butler, the school has been regarded as one of the greatest schools in the country at preparing for each and every one of their opponents.

After reaching the Western Conference Finals, former Memphis Grizzlies head coach Lionel Hollins was let go by the team because of "major philosophical differences." The Grizzlies wanted a coach that would buy into an analytical approach to the game, which seems to be the path the NBA is headed towards.

Brad Stevens is a very progressive hiring for that reason. Stevens was the first coach in the history of college basketball to hire a statistics-based assistant on his staff, Drew Cannon.

Sports Illustrated's Pete Thamel wrote about Stevens' and Cannons' relationship and approach to the game earlier this year. To put it simply, Brad Stevens approaches basketball from a stats-based perspective. As Thamel put it, "Stevens trusts what he sees with his eyes but says, ‘The numbers bear themselves out pretty accurately over the course of time.'"

It's hard to get a read on what's really happening behind closed doors, but here's an excerpt from the article that gives us a little bit of insight:

Butler has found secret weapon in statistical guru Drew Cannon - Pete Thamel - SI.com
What makes Cannon's value tricky to quantify is that he and Stevens are reluctant to share many specifics of his research. There are simple things he does like keep practice statistics, track the efficiency of specific set plays and the statistical tendencies of opponents.

But as far as the in-depth statistical analysis, Stevens gave only a peek as to not forfeit an edge. Cannon sends Stevens a 10-page e-mail breaking down and analyzing the numbers after every Butler game. The report takes 10 to 12 hours for Cannon to put together.

Cannon's greatest value is with lineup analysis, as Stevens terms his work "unreal." "It includes every player, pairs of players, groups of three, big lineups, small lineups, etc.," Stevens said. Cannon will also include the offensive and defensive efficiency of Butler's players from previous matchups with an opponent, which Stevens said, "Will help me determine probable sub patterns, late game lineups, etc."

Brad Stevens will be another head coach in the NBA that believes defense is the foundation of a championship contending team. In recent years coaches like Tom Thibodeau and Erik Spoelstra have gained a large amount of respect around the league due to their philosophies on the defensive end of the floor and for the success their teams have had.

In six seasons with Butler, Brad Stevens' teams have averaged as the 206th ranked team in the country in offensive rebounds per game. This technique to not attack the offensive boards aligns with what Doc Rivers and Tom Thibodeau had preached in their time in Boston. Last season, both teams that met in the NBA Finals -- the Miami Heat and San Antonio Spurs -- were ranked in the bottom three for offensive rebounds per game. The Boston Celtics averaged the least in the league. 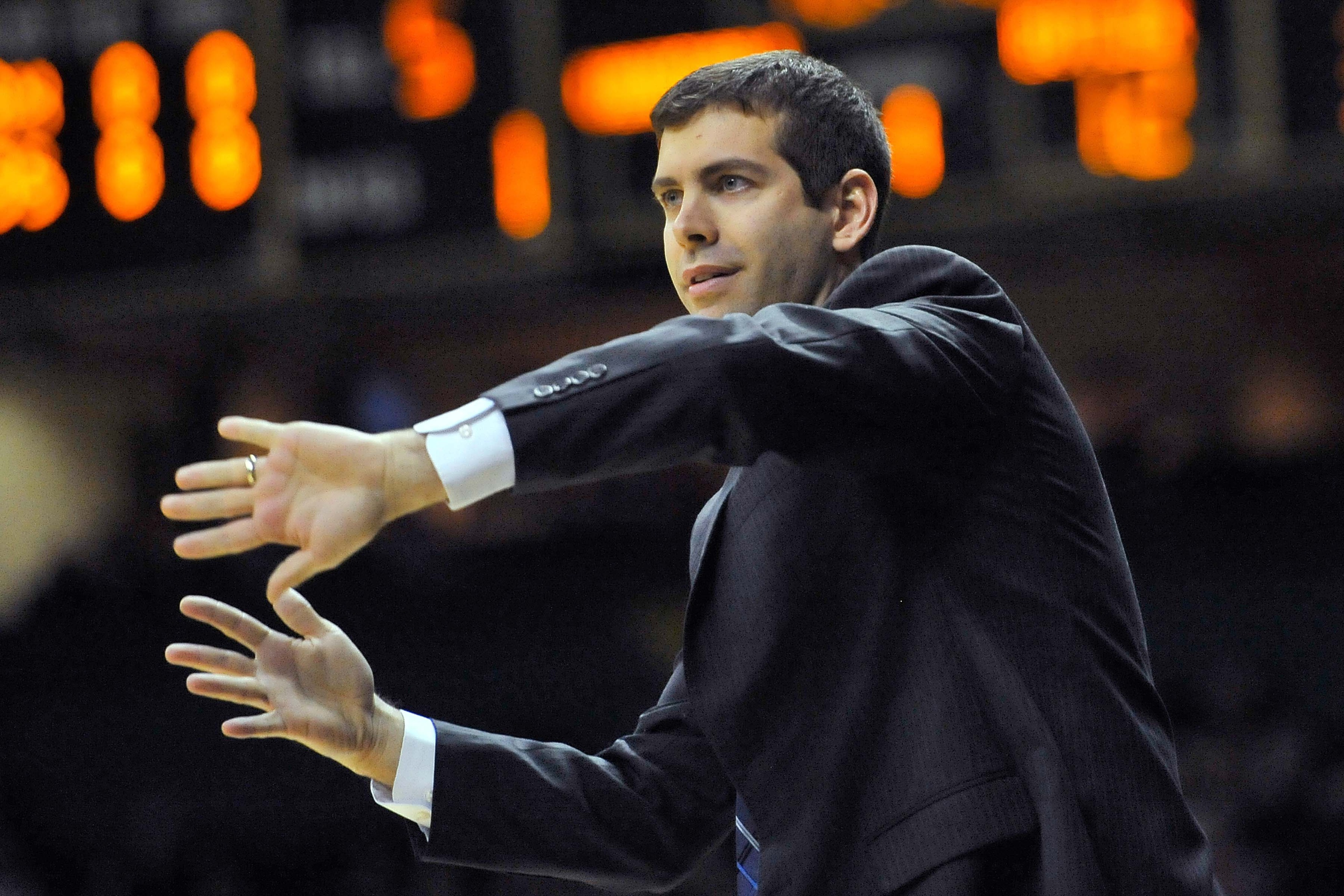 Like the Heat, Spurs, and Celtics, simply getting back on defense was Stevens' first step to having a fundamentally sound defense at Butler. He will bring this same philosophy to Boston.

With drastically different personnel in the NBA, Brad Stevens' greatest difficulty to overcome will be getting through to his players. But if he manages to get the team to buy in to his team-first philosophy, the style of defense should remind viewers of some of the more recent great Boston Celtics defenses.

During my internship with Comcast SportsNet New England I was able to discuss defensive philosophies with Brian Scalabrine. Him and I talked about how defending doesn't end when a shot is taken, it's over when the possession of the ball has finally changed. That means that rebounding -- which is often mistaken as a separate entity -- is an integral part of the success of your defense.

This is one part of Stevens' defensive philosophy that I absolutely love; Brad Stevens puts a strong emphasis on boxing out after the shot is taken. One of my greatest criticisms of Doc Rivers was the lack of importance he seemed to place on boxing out. After Tom Thibodeau left to coach the Chicago Bulls, I thought the Celtics tended to rely more on athleticism to grab rebounds instead of technique.

With Butler, Stevens says that he preaches the importance of finishing plays and teaches boxing out based on the individual attributes of each player. He teaches that less mobile players (centers and power forwards) have the responsibility of boxing out the offensive player to keep them from getting the ball and more mobile players (guards and small forwards) may quickly hit their man and then pursue the ball.

If Brad Stevens is able to bring his same philosophy of getting back on defense, boxing out, as well as his extremely complicated half court defensive schemes, the Boston Celtics could have lots of success in the near future.

Respect from his Peers

Even though he's only 36-years-old, Brad Stevens has already gained enormous respect for his coaching peers. I'll just let the following quotes speak for themselves:

"Coach Stevens is a Hall of Fame coach. He's just not old enough for you to call him that yet." - Buzz Williams, Marquette head coach

"He's an outstanding coach...He's terrific. It's a great hire for the Celtics. He'll have respect. He's accomplished. Players respect success. He's had great success right away, so I don't think he'll have any problem with the players respecting him. They'll respect him, they respect excellence; he has it. It's a terrific hire." - Mike Krzyzewski, Duke head coach

"The best young coach I have seen in my time." - Jim Boeheim, Syracuse head coach

"I've gone through seven, eight game tapes of Butler. It's the best coaching clinic you can have. Their attention to detail, their execution defensively and offensively is textbook." - Dave Paulsen, Bucknell head coach 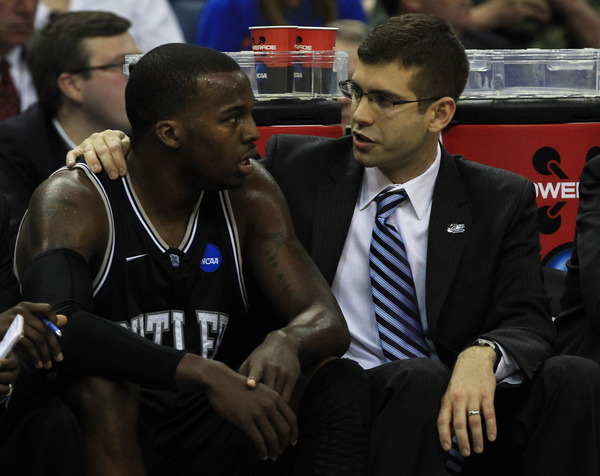 Brad Stevens has many obstacles to overcome in order to reach his potential as a head coach for the Boston Celtics but he has a lot going for him that many other college-to-pro coaches didn't. Stevens, for one, isn't someone that looks for all the attention like many of the other great college basketball coaches. He brings a calm and cool demeanor to the court, so his teams respect and emulate that.

He also isn't entering a situation with enormous expectations in year one. While there are no guarantees the Boston Celtics go into full rebuild mode, they are most certainly in a drastic retooling period. Expectations will be relatively low this season, so Stevens will only need to excel in player development -- something he has much success with -- with less emphasis on the win-loss column.

Brad Stevens is also joining an organization with an extremely stable ownership group. From Wyc Grousbeck to Danny Ainge, the front office seems to be well intact. Management has also clearly stated how much confidence in him by signing him to a lengthy and pricey six year, $22 million dollar contract.

The Boston Celtics have traded away most of what has made them great in the past decade in Paul Pierce, Kevin Garnett, and Doc Rivers. But with some of the remaining players on the team, the future draft picks, and Brad Stevens as the coach of the franchise, the future is extraordinarily bright.

What do you think? Does Brad Stevens have the potential to be one of the best coaches in the NBA? Did the Celtics make the right choice hiring him? Comment below or follow and tweet me @Kevin__OConnor with your thoughts!