Boston Celtics' summer league head coach Jay Larranaga had his players performing with poise and chemistry as the C's defeated the Detroit Pistons 93-63. Shooting guard Darius Johnson-Odom led the Celts with 22-points on 8-of-14 shooting. Kelly Olynyk also followed up his impressive play from yesterday with 13-points, 6 rebounds, 5 steals, and 3 assists. Most impressive of all was Boston's team defense, forcing the Pistons into 21 turnovers and 27.7 percent shooting. From the opening tip to the final whistle the Celtics looked like they had been playing together for weeks even though it has only been a few days. Click here for the full box score.

That's literally how I react while watching Phil Pressey play. The point guard out of Missouri goes from making one terrific play to a terrible one; I now completely understand why the biggest knock on him coming out of the draft was his lack of consistency.

Celtics Summer League Preview: What to Watch For 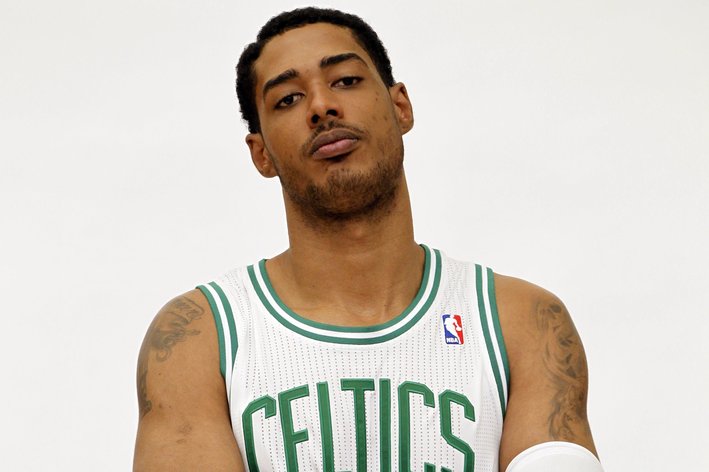 Late in the second quarter Pressey came off a screen and pulled up for a wide-open three-pointer and nailed it. The next possession up the court he dribbled hard to the basket, left his feet, had nowhere to go and passed the ball to the perimeter... to nobody. Far too often Phil gets careless with the ball, which is why he's so prone to turnovers.

If Phil Pressey can somehow eliminate some of these sloppy passes, he easily could become a very good backup point guard in the NBA. He's a very good ball handler and knows how to find the open man. When scoring, he's a great outside shooter, which he proved today by shooting 2-of-4 from three-point range.

The most consistent part of Phil Pressey's game is his defense. From the first possession of the game he was applying full court pressure on point guard Peyton Siva, who was unable to get anything going all game long. In fact, I would contribute much of the Celtics' defensive success to Pressey's efforts on the defensive end. Phil only had one steal on the day but the stats don't tell the full story.

Kelly Olynyk's career is off to a fast start in Boston. He already has a nickname -- either "KO" or "The Big KO" -- and some C's fans are ready to label him as the love child of Larry Bird, Dirk Nowitzki, and Kevin McHale. Speaking of McHale, the highlight of the game came late in the third quarter when Olynyk was fed the ball on the left block. He took two dribbles towards the basket, spun into the lane and showed the ball; the defender left his feet and Olynyk went underneath for an easy layup. Oh, gorgeous. Kelly Olynyk has obviously spent a lot of time watching old clips of Kevin McHale -- the master of the up-and-under post move -- and even more time practicing on the court. That was a picture perfect moment.

Olynyk did a lot of the same things well that he did yesterday -- patient post moves and three-point range -- but struggled continued to struggle with his pick-and-roll defense and rebounding. He did give C's fans a few more reasons to love his potential though. During the third quarter Olynyk hustled hard to get back on defense and tipped away a pass that then headed out of bounds. Instead of giving up -- knowing it was just a summer league game -- Kelly dove into the first row trying to save the loose ball. He wasn't able to do it but his hustle is just another reason why fans have grown to love him so quickly.

Kelly also made a few nice passes throughout the game today including a perfect entry pass to Fab Melo and a great, timely outlet pass to Darius Johnson-Odom. Olynyk continues to show a very high basketball I.Q. with the ability to create not just for himself, but also for his teammates.

I'm ready to call Darius Johnson-Odom the summer league version of Jordan Crawford. "J-Craw" is loved and hated by Celtics fans because of his unorthodox style of play and gumby-arms. "DJO" plays a very similar style with out-of-control drives to the basket that end awkwardly, make or miss.

Johnson-Odom's 22-point performance might fool you into thinking that his game can translate to the NBA but I don't see it happening. For one, he's only 6'2" and is playing the shooting guard position. He's not athletic enough to make up for his lack of size and he's not nearly talented enough in one single category either.

Most of Johnson-Odom's success came on open three-point attempts and on drives to the basket. I have two issues with his drives: first, most of his success came when Detroit had no inside presence on the floor. I don't believe he would've had any success if center Andre Drummond had played. Secondly, he's just way too careless and doesn't know how to pass the ball when things go sour. DJO had four turnovers because he put himself into bad situations and had nowhere to go with the ball. He even got blocked by former C's forward JaJuan Johnson in the first half after an absolutely terrible drive to no man's land on the baseline.

In order to have success in the NBA, Darius Johnson-Odom will have to change his style and improve on his passing. He can catch fire and score depending on the matchup -- much like Jordan Crawford -- but he's too small to have this success consistently. If he was able to adapt as a passer, he could use his ball handling skills to penetrate the lane and dish off to his teammates. Can that happen by training camp?

I was very disappointed to hear that Andre Drummond would not play for the Detroit Pistons today. Both Fab Melo and Colton Iverson could've used the work against him but were instead matched up against Viacheslav Kravtsov, a center out of Ukraine. Even though Kravtsov has some experience playing in the NBA it just wasn't the same level of competition for Fab and Colton.

Nonetheless, both Melo and Iverson had a solid game for the C's. Both players are limited on the offensive end of the floor but I was impressed with their defense. Melo took three charges, showing that he has improved playing man-to-man team defense. He rotated well throughout the game and did a quality job protecting the rim.

Very much of the same can be said for Colton Iverson. I thought his post defense was very good on Kravtsov. During one possession in the first half, Iverson and Kravtsov were battling for post positioning but Colton did an amazing job of denying the ball. Iverson knows how to use his strength to his advantage, something Fab needs to get better at.

I'm starting to get the feeling that these two are battling for the backup center position this season. I'd give Fab Melo a slight advantage at the moment but there is a long way to go.

-Guard Jayson Granger took a few steps back today. The other day I wrote that he looked the part of a "true point guard." I can't say that now. This afternoon he looked more like a true shooting guard that was stuck playing the point. He made a couple terrible passes throughout the game and was lucky not all of them were turnovers.

-I was surprised that small forward Courtney Fells didn't get a lot of playing time in the second half. I haven't heard anything about an injury but I thought he had another effective game in the first half. The box score isn't that impressive -- 4 points, 2 rebounds, and a lot of zeroes -- but his hustle and fundamentally sound defense are there.

- I'd love to see small forward Tony Mitchell get the ball more next game. In the NBA Developmental League he was the Rookie of the Year because he knew how to score with the ball in his hands. In the summer league he has been playing off-ball, getting most of his chances from backdoor cuts and corner three-pointers. I hope he just isn't a body for camp because he deserves the chances that Darius Johnson-Odom is getting.

-Boston's team defense was amazing in the first quarter. They were constantly communicating with each other, holding the Pistons to only 9 points that period. Both Fab Melo and Colton Iverson played very well at the backend of the defense with Phil Pressey disturbing each and every possession for the Pistons.