Is Darius Johnson-Odom on his way to Las Vegas?

Darius Johnson-Odom is grinning ear to ear as he is set to gamble his money in Las Vegas.

Share All sharing options for: Is Darius Johnson-Odom on his way to Las Vegas?

Darius Johnson-Odom is a 6'2" guard from Marquette who has been playing with the Boston Celtics in the 2013 Summer League. Despite having two games remaining on the schedule, Johnson-Odom sent out some interesting tweets that suggest he will not be with the C's the rest of the week.

Vegas in the AM. @qmillertime time to get this money!!

Hmm, well that's peculiar. With two games left to go on the C's summer schedule, why would "DJO" already be on his way to Las Vegas? Judging from the tweet, it sure sounds like Darius is just trying to get out early so he can hit the strip and have some fun. And how about this conversation he had with Nolan Smith? Smith is another guard that was with the C's before injuring his leg: 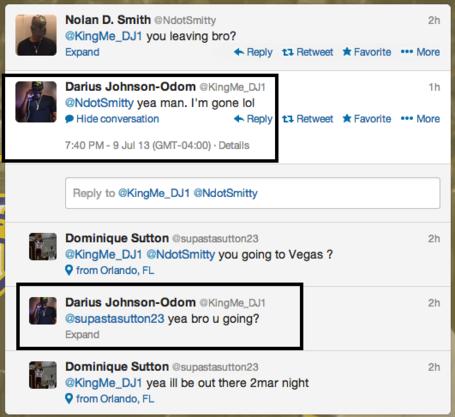 Hopefully Darius has better success at the tables in Vegas than he did shooting the basketball with Boston considering he shot only 37 percent from the field. In three summer league games, Johnson-Odom averaged 10.3 points, 2.3 rebounds, 1.3 assists, and three turnovers.

This article will be updated if we receive official word from the Boston Celtics on the situation with Darius Johnson-Odom. Thanks to CelticsBlog user "winbos" for the heads-up on this information.