What if the Celtics won the NBA draft lottery in 2007 and selected Greg Oden or Kevin Durant?

Take a trip with me on the Celtics Blog Time Machine. We're going all the way back to 2007 to see what would've happened had the Boston Celtics drafted Greg Oden or Kevin Durant.

Share All sharing options for: What if the Celtics won the NBA draft lottery in 2007 and selected Greg Oden or Kevin Durant?

I remember the 2007 NBA draft lottery like it was yesterday. May 22, 2007: the Boston Celtics had the second best chance at getting the number one pick and were all but guaranteed Ohio State center Greg Oden or Texas forward Kevin Durant.

Deputy commissioner Adam Silver stood at the podium to reveal the draft order and out came the selections: Number ten...Sacramento. Number nine...Chicago. Number eight...Charlotte. Number seven...Minnesota. Number six...Milwaukee. Number five...as Silver pulled the card out from the envelope he raised his eyebrows as if he was surprised to see a certain team's logo.

It was Lucky the Leprechaun. The Boston Celtics ended up with the number five pick in the draft in a year that they were destined for greatness by way of Greg Oden...or Kevin Durant.

I was crushed. I think every Celtics fan out there had the same exact reaction: our jaws dropped, our eyes sunk, and our face was in our hands. We all asked, "why us? Why us!?!?" Throughout the season myself and many other Celtics fans were rooting for Doc Rivers to develop his young players -- and he did -- but deep down inside we all really wanted the team to lose in order to get a high draft pick. Greg Oden was supposed to be the savior of the franchise. But if we didn't get him, at least Kevin Durant would make for a nice consolation prize.

Of course, we all know it worked out okay. Danny Ainge traded the number five pick in a package to the Seattle SuperSonics for Ray Allen and then he eventually acquired Kevin Garnett from the Minnesota Timberwolves. Along with Paul Pierce, the Big 3 went on to win an NBA title and create lifelong memories for fans across the world. Everything truly did work out for the best.

But what if the Boston Celtics actually ended up winning the lottery and drafted Greg Oden or Kevin Durant?

With the first pick, the Boston Celtics select Greg Oden...

Greg Oden was a star at Ohio State, averaging 15.7 points, 9.6 rebounds, and 3.3 blocks per game. In the NCAA National Championship Greg Oden had 25 points, and 12 rebounds, establishing himself as the undisputed number one pick in the draft.

And now he was a Celtic, ready to potentially become the greatest big man to wear The Green since Bill Russell. But things would take a turn for the worse when he would have to have micro fracture surgery on his right knee before the start of the 2007-2008 regular season. The center out of Ohio State wouldn't play until the following season.

The Celtics would continue to be a team hovering around .500 before forward Paul Pierce demanded a trade. Reluctantly, Danny Ainge would deal Pierce away at the trade deadline to a contending team for below-market value.

The Celtics would tank the rest of the season and end up with the number three pick in the draft. They would draft O.J. Mayo, who was once thought to be the next great college basketball player, but failed to meet expectations at USC. Regardless, Mayo brought the team a potential top-scorer to replace The Truth.

With a starting lineup of Rajon Rondo, O.J. Mayo, Ryan Gomes, Al Jefferson, and Greg Oden, the young Celtics were poised for a strong 2008-2009 season. Despite Greg Oden's continued health problems, the team would go on to make the playoffs as the seventh-seed. Even though they experienced an early first-round exit, the future was looking bright.

Now 100 percent healthy, Greg Oden and the improving 2009-2010 Boston Celtics were ready to make a run in a relatively weak Eastern Conference. Oden got off to an amazing start, averaging 12.2 points, 9.5 rebounds, and 2.5 blocks per game. Despite their overall weaknesses on the defensive end, Oden was able to be an anchor down low, but the Celtics would soon be lost at sea when Oden came down with another terrifying knee injury.

That moment basically signaled the beginning of the decline of the franchise. After failing to successfully select a number one draft pick, owner Wyc Grousbeck cleaned house, firing Danny Ainge, Doc Rivers, and every other coach and executive imaginable. Fast forward to the 2013 NBA offseason and the Celtics are still in the process of rebuilding their franchise.

With the second pick, the Boston Celtics select Kevin Durant...

Even though the Celtics lost out on Greg Oden, Kevin Durant showed lots of promise in his only season with the Texas Longhorns. He averaged 25.8 points, 11.1 rebounds, 1.9 blocks, 1.9 steals, and 1.3 assists per game. Durant was lanky but had all the talent required to become a terrific player in the NBA.

Though Durant would start his career as a shooting guard, his long term potential placed him at the small forward position. Danny Ainge looked to act quickly and traded veteran small forward Paul Pierce for a plethora of future draft picks. 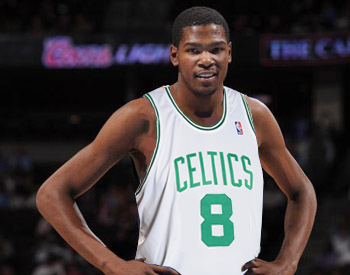 With a potential lineup of Rajon Rondo, Tony Allen, Kevin Durant, Al Jefferson, and Kendrick Perkins, the Celtics had a strong balance of offense and defense to build upon. But young teams always have a hard time competing in the NBA, so they failed to make the playoffs in 2008. With a mid-lottery pick, the Celtics ended up drafting Indiana shooting guard Eric Gordon.

Doc Rivers and the rebuilding years would soon be behind, as the next two seasons the Celtics would continue to build their complimentary pieces to make a run in the NBA playoffs. After Durant's sophomore season, he was already considered one of the best scorers in the league, but it wasn't until his third year that he really began to turn heads by averaging over 30-points per game.

With a still-developing core, Durant and the Celtics would go on to make a handful of long playoff runs from 2009 to 2011. But it wouldn't be until the 2011-2012 season when the Celtics finally had a roster that was completely capable of making it to the NBA Finals.

Led by a lineup of Rondo, Gordon, Durant, Jefferson, and Perkins, the Celtics faced off against LeBron James and the Cleveland Cavaliers in the 2012 Eastern Conference Finals. In the 2011 Finals the Cavs defeated the Dallas Mavericks and were looking to win their second straight title.

Durant and James went head-to-head for seven games, but it was the complimentary pieces like Gordon and Perkins that truly gave the Celtics the edge and the eventual series win. The C's would advance to the NBA Finals for the first time since 1987 and face off against their rivals, the Los Angeles Lakers.

The Celtics led the series 3-2 after five terrific games, but they would have to close things out on the road in Los Angeles. Led by Kobe Bryant and Andrew Bynum, the Lakers tied the series up in game six.

Game seven would go down as one of the greatest games in NBA history. Down 12-points with three minutes to go, Kevin Durant caught fire and led a torrential attack to bring the Celtics back. With only ten-seconds left, the Celtics had the ball, and were down by two-points. Rondo inbounded the ball to Durant...eight-seconds...staring down the defender, Metta World Peace, he began his dribble...four-seconds...Durant crossed over to his left, elevated for his shot from behind the three-point arc and sank it! The Boston Celtics won Banner 17 against their archrival, the Los Angeles Lakers!

This past season would end very similarly, with the Celtics again defeating LeBron and the Cavaliers in the Eastern Conference Finals. But this time they faced off against the San Antonio Spurs in the Finals, handling them in only five games, winning their second title in a row, and the franchise's 18th championship.

It's really fun to think about "what if" when it comes to crucial moments in franchise history like the 2007 NBA draft lottery. I want to know what you think would've happened if the Celtics ended up drafting Greg Oden or Kevin Durant. Leave your hypothetical stories in the comment section below and be sure to vote on the poll!