Kicking off the Countdown to Camp series by focusing on Rajon Rondo.

Share All sharing options for: Rebuilding, Rehabbing, and Random Rondo

The Dos Equis guy would stop and take a photograph with Rajon Rondo because Rondo is the most interesting man in the world.

He passes up wide open layups in order to get more assist opportunities yet he gets into a fight that causes him to snap his own assists streak.

He openly admits that he's difficult to coach and some might go so far as to call him a headcase teammate, yet former coaches and teammates alike express their undying love for him (well, everyone but Ray Allen).

He's been the best player in several playoff series that involved players like LeBron James, Derrick Rose, as well as his own Hall of Fame teammates.

He's completely unpredictable and he's the single most important person involved in the next era of the Boston Celtics.

The best case is that he returns fully healthy and realizes all the potential that he has as a leader and superstar player, ushering in a new era of greatness and banners. The worst case is that he either never gets healthy or never sees eye to eye with the coach or management or anyone in particular. He could be here for the duration of his career or he could be traded next week. Some of that is out of his control, but a lot of it is on him.

In a sense, he was left behind by the only NBA coach he's ever played for, the Captain and franchise face that has always been there, and his best friend remaining on the team and fellow diva. And this all happened in one summer. The front office has made it clear that they are rebooting the computer and installing new software. Others in his situation might have demanded a trade or freaked out in some way. So far, Rondo seems to be taking things relatively in stride (at least as far as we can tell without hearing directly from him - and even then I'm not sure exactly how much we'd learn).

Despite the obstacles ahead in both coming back from the ACL tear and navigating a team in transition, Stevens stressed that Rondo is ready for the challenges. "My general sense is that he’s really excited," said Stevens. "He is excited about the challenge of the new season, he’s excited about the challenge of a new situation. He seems to be excited. I don’t want to speak for him, and I don’t want to put words in his mouth, but every time we’ve talked it’s been a really engaging conversation."

His attitude is very critical to this season. In theory, it shouldn't be. Of course he's excited to be the new face of the franchise and prove how well he can perform without the benefit/excuse of having Hall of Fame teammates. For most star players in his position that would be a given. But Rondo is a surly, introverted, stubborn guy and he sometimes takes the more difficult road. 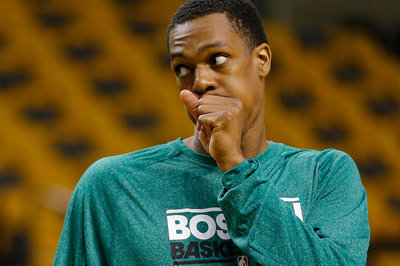 What will Rondo do next year? The only sure thing is that he won't be what we expect.

Still, if he really is excited about the challenges ahead of him, if he really buys into the direction Brad Stevens and the front office are going, if he's laser locked on getting himself ready physically, if he's smart enough to understand that his performance this year could result in a max contract extension...(and he's absolutely capable of all those things) then this could be a hugely positive year for him.

Everyone knows he's got the talent and the creativity to dominate on the court in a very unique way. What we don't know is how that translates into a world without Pierce and Garnett taking turns leading and following his lead. At times he's gone through periods where he's seemed disinterested and going through the motions and we don't know yet if that will happen more or less in a rebuilding situation. We don't know how long it will take him to get to 100% physically or if he'll still have the same burst and agility that he had before his injury. And of course we don't know if Danny Ainge really wants to rebuild around Rondo or if he's simply waiting for him to prove he's healthy so his trade value will return to normal levels.

And even if he's fully healthy, fully engaged, and playing at the top of his game, who knows if his teammates will be up to the task. It is pretty important for a passer to have guys that can be in the right spots, catch the ball, and make baskets. If and when they don't, how Rondo handles that will be key to his development as a leader on a young team.

I like to call him Random Rondo when he does something completely unexpected on the court. A lot of people in the media are kind of expecting him to take a step back either in attitude or health or some combination of the two. I'm really pulling for him to surprise those people by stepping up and stepping forward instead.