A pack of pit bulls: what the Celtics defense could look like next season

I'm surprised there isn't a supercut on YouTube of coaches saying, "defense wins championships." It's an old cliche you hear repeated over and over again because it's true. Defense does win championships. It's what Boston hung their hat on during Doc's tenure with the The Big Three/Four and it took them to two NBA Finals and an Eastern Conference Finals in six years. With Rivers out west and Kevin Garnett barking in Brooklyn, many wonder if the C's can dominate on the defensive side of the ball again because, well, defense wins championships and even on a rebuilding team, it needs to be a priority.

Share All sharing options for: A pack of pit bulls: what the Celtics defense could look like next season

As a mid-major, Butler was rarely in the market for five star recruits or freak athletes and yet, they went to two consecutive championship games under Brad Stevens.  He filled out his roster with gritty players passed up by the Dukes and Connecticuts of the college basketball world and then went on to battle them in the Final Four.  David never beat Goliath, but it shouldn't go unnoticed that he figured out a way to outwork and outsmart him with just a slingshot and handful of stones.

If we're being honest, the circumstances at Butler mirror what Stevens will face in his first few years in Boston.  As a young, rebuilding team, the Celtics are a mid-major competing against big market powerhouses.  Outside of Rondo, the Celtics lack a superstar and a dominating physical presence like a young Shaq or LeBron that changes the dynamic of the game by just being on the floor.  Even at his advanced age, Garnett was that for us, but he's gone, too.

The roster is a collection of could-bes, has-beens, and never-will-bes, a group of guys initially intended to be role players on a championship team.  But the thing about defense is that it doesn't take superstars.

Stevens has been connected to the analytics movement and that will surely help him in figuring out the best ways to utilize his players on offense, but defensively, that may be a tougher equation to solve.  A smart coach knows that defense defines a team.  It takes commitment to a core set of principles by everybody on the team.  It's what gives a team their identity on defense and hopefully, their identity in winning.  Conventional wisdom says that the C's won't know what they have or who they are for the next couple of years.  The roster is a collection of could-bes, has-beens, and never-will-bes, a group of guys initially intended to be role players on a championship team.  But the thing about defense is that it doesn't take superstars.  If everybody buys into a system, they can stop the unstoppable. 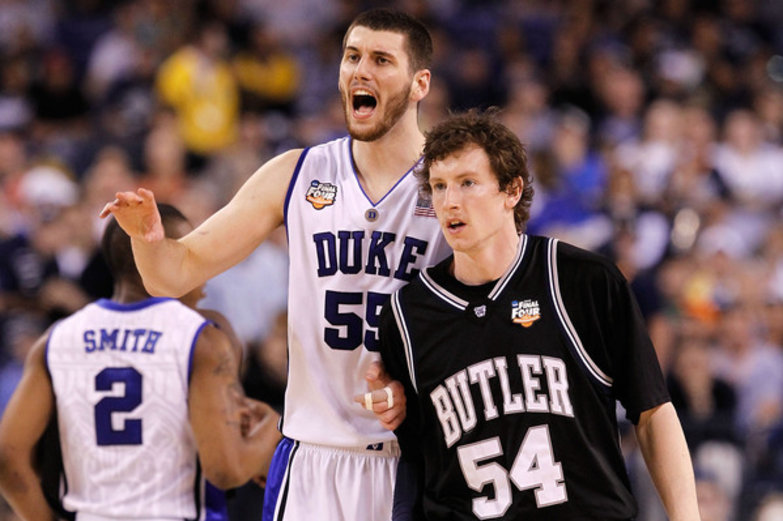 The Butler Bulldogs were never big or fast.  For two straight years, they were one game away from cutting down the nets fielding a team consisting of six foot nothing guards and scrawny small forwards masquerading as bigs.  How'd they do it?  How'd they defy the odds to overcome what were perceived disadvantages?  Defense.  Tell me that this doesn't sound like a certain Celtics championship team from 2008:

"They say we foul a lot," Mack explained, "on every single play." And that those fouls aren't called.

"There are teams that say we approach the line defensively," said Butler's Khyle Marshall, "and that sometimes we cross it. We don't. That's just not true. We're not dirty."

"A couple of the Horizon League teams think a lot of our guys flop," Butler's Chase Stigall said.

One of the schools even has a Butler flop chant. "If teams are complaining about us on the defensive side," said center Andrew Smith, "it's a good thing."

And this video was made by a Lakers fan after the Finals.  Cue the dramatic conspiracy music:

At first glance, good team defense looks the same and more importantly, feels the same to the other team.  What appears as a well choreographed ballet of rotating players perfectly timed to the motion of the offense is actually the slow choke of a boa constrictor counting down to your last breath.  Step, ball, change, 24-second shot clock violation, step, ball, change.  However, there are many ways to tighten a straight jacket and I think there are going to be a few differences between what Bulls' head coach Tom Thibodeau developed and what Brad Stevens might bring to Boston.

Generally speaking, Thibodeau's defense is more aggressive.  Let's examine how they might deal with basketball's most basic offensive set: the pick-and-roll.  Before, when a pick was set, you'd hear Rondo or KG call out, "Ice!  Ice!  Ice!"  That would be a signal for the ball defender and screen defender to drive the ball handler in the opposite direction of the pick.  That usually meant towards the sideline and the baseline so they could act as 3rd and 4th defenders.  Here's White Mamba in the CSNNE basketball lab taking Donny Marshall to school:

You can also check out John Schumann at NBA.com's Hang Time blog to see how the Celtics "iced" Philly's pick-and-roll game last year in the playoffs.  As you can see, the Celtics would in effect dictate where the Sixers went with the ball even though they were on offense.  Butler's pack line defense is a little different.

I found a pretty good description here at The Coach's Clipboard.  The pack line defense, otherwise known as "sagging man-to-man," is more patient and protective.  The philosophy is simple: you draw a line in the sand and make sure nobody gets past it like those old Under Armour commercials yelling about "you must protect this house."  Check out a few sets from Butler's championship game against Connecticut.  With Butler packing in the paint, the Huskies (and VCU later in the video) settle for a lot of low percentage jumpers:

You'll notice that on most PnR's, the big guarding the screener would just slide over until his teammate could recover.  Also, there was constant gap awareness from the strong side wing.  If a ball handler could turn the corner, another defender would sag down to defend the penetration.  He'd leave his man briefly open for a shot, but in the pack line, that's the lesser of two evils.  The paint is sacred real estate.  Here's an example: 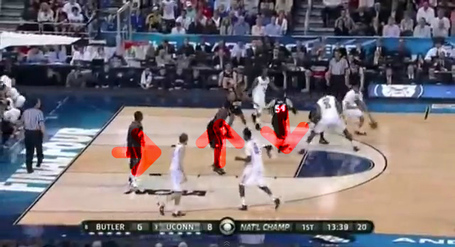 When the screen is set, #54 Matt Howard slides to cover the ball handler, #23 Khyle Marshall sinks into the key, and #1 Shelvin Mack leaves his man to ward off any thought of penetration.  For what it's worth, last season's was Butler's first year in the more competitive Atlantic-10 after leaving the Horizon League.  With the pack line defense, they ranked third in total points allowed, fifth in field goal percentage, first in rebounding margin, second to last in blocked shots, and didn't force a lot of turnovers.  That tells me that Stevens' team forced a lot of bad perimeter shots and took care of the loose balls.  The Bulldogs would bend and rarely broke. 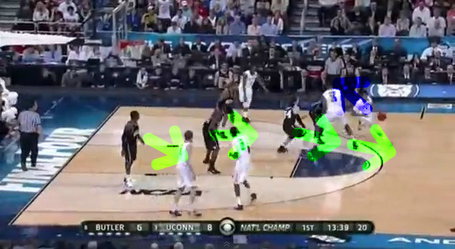 By comparison, the Celtics of old would have hedged that screen.  Matt Howard (Garnett) would have met the ball handler on the high side near the three point line and forced him towards the sideline.  Marshall would have picked up the screener just in case he rolled towards the rim and Mack would have had weak side responsibility covering Marshall's man or picking off the cross court pass to his man.

What does that mean for the Celtics of today?  Well, there is some concern that without Garnett calling out pick-and-roll coverage, the defense won't be the same and that's true.  Nobody can replace the best middle linebacker in basketball.  However, we've still got some of the best cover corners in the game.  ESPN Boston's Chris Forsberg touched on this in one of his mailbag discussions last week where he looked at man-to-man stats for points allowed and how that compared to the rest of the league.  All-Defensive 2nd teamer Avery Bradley allowed 0.697 points per possession ranking him in the 95th percentile, Rondo was at 0.777 ppp (86th), Jeff Green 0.79 ppp (82nd), Brandon Bass 0.756 ppp (91st), and Jared Sullinger 0.708 ppp (95th).  Why is that important? 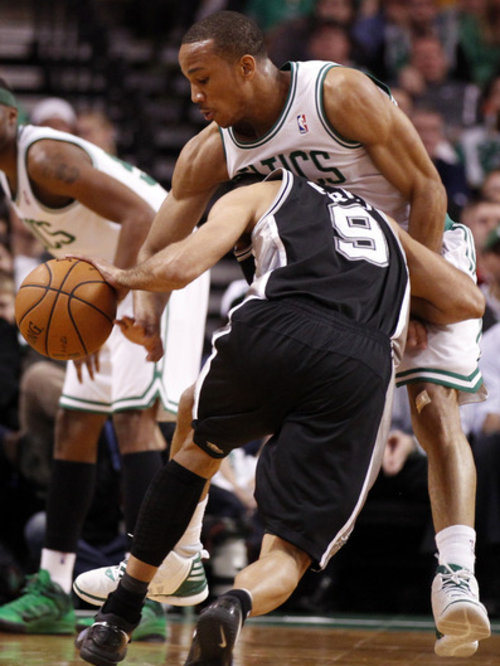 Bradley's bite is worse than his bark.

Without Garnett patrolling the baseline, defense pressure is going to have to come from the guards and wings.  Picks are no longer going to be neutralized by a big hedging high side on a screen.  Guards are going to have to fight over the wall and recover.  Strong side wings will have to sag down and cut off guys slashing to the rim even if that means leaving their man for a corner three.

This sounds easier said than done.  There are no restrictions in the college game about zone defenses and let's face it, the talent level is exponentially higher in the NBA.  There isn't a LeBron James in the A-10 screaming down the tracks like a runaway train or Steph Curry ready to hit a lay up from behind the arc, but the Celtics aren't exactly sieves on the perimeter either.  People have complained about the redundancies on this roster, but I don't think you can have too many of the types of guys we've got.  I mean, you don't hear sharks complaining about having too many razor sharp teeth.  You look at those Butler teams from a few years ago and you'll see five guard rotations in order to keep legs fresh patrolling the perimeter.

Against a pair of pit bulls, you'd have problems initiating your offense.  Against a pack of them, you're looking at a feeding frenzy.

Maybe the pack line defense was born out of necessity at Butler based on personnel, but Stevens' has a good opportunity to replicate his defense in Boston.  There isn't a better defense suited for the current roster.  The pack relies on heavy ball pressure and help defenders sagging off their men on the wings to prevent penetration.  Think about the guys on this team right now.  Rajon Rondo.  Avery Bradley.  Courtney Lee.  Jeff Green.  Gerald Wallace.  Keith Bogans.  Throw in the 6'5 frame of MarShon Brooks with his 7'1 wingspan.  Against a pair of pit bulls, you'd have problems initiating your offense.  Against a pack of them, you're looking at a feeding frenzy.  I'm pretty sure Jameer Nelson is already calling in sick.

We can talk about schemes and systems and personnel packages, but in the end, it's going to come down to attitude and this is where I think Brad Stevens and the Celtics are way ahead of the game.  We can fault Doc for leaving the way he did or blame Danny for trading the heart (Garnett) and soul (Pierce) of this team to Brooklyn, but what those guys left behind are a group of players that know the importance of defense team defense.  That'll be the through line between the old regime and the new.  Danny wiped the slate pretty clean this summer but just as Garnett channeled Bill Russell when he came to Boston, I have no doubt that Rondo, Bradley, Green, and everybody that had a chance to play with KG will think of him when they're down on all fours, champing on the bit in the Garden.  Stevens won't have to worry about some volume shooter buying into his system (I'm looking at you, Jordan Crawford) because most of the players on this team have been paying their dues for awhile now.