1. What significant moves were made during the off-season?

Where do I start?

I guess the first shoe that dropped was Doc Rivers being "traded" to the Clippers. Then on draft night the Celtics agreed to trade Paul Pierce, Kevin Garnett, and Jason Terry to the Nets for Gerald Wallace, Kris Humphries, MarShon Brooks, Keith Bogans, and a bushel of future draft picks. They also picked Kelly Olynyk in the first round, grabbed Colton Iverson in the second round (later to be stashed overseas) and signed a few free agent rookies. Then they shocked the world by snatching Butler wonderboy Brad Stevens from the college ranks and giving him a 6 year deal to be the coach of the Boston Celtics.

In short, it wasn't dull.

So where does that leave us? Well, we're kind of stuck in a no-man's land. We've still got Rajon Rondo and some good young pieces as well as a few could-be-good pieces from the Nets. So we aren't openly tanking like the 76ers. But we aren't good enough to compete for a title. How you look at it kind of depends on your point of view. 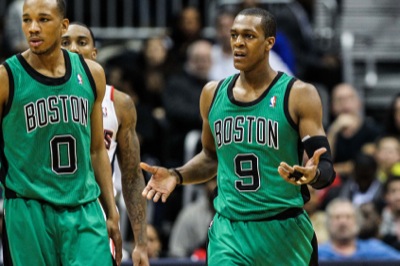 FLANNERY: The Stevens experiment
O'DONNELL: Is Bradley more than a specialist
PRADA: The art of Rondo's stop and go
An uncertain roster

Glass half empty version: This could be a very bad thing. If you need a visual, consider this building. We've kind of got a half demolished building. Backing into the playoffs because we don't stink as much as some other tankerific teams in the East would be a bad thing in a year where the top prospects all appear to be sure thing game changers.

Glass half full version: Ainge has already proven that he knows how to turn a team around. Last time it took some time to happen but this time he's got a much better starting point to work with. This year could simply be a bridge to the future. By next summer, Ainge will have a ton of assets to dangle in trade offers for whatever stars become available (and someone always becomes available).

2. What are the team's biggest strengths?

A blank canvass. This franchise is getting a fresh start. For years we've been hearing about "The Window" closing on the Big 3 era. The window has been slammed shut, the page has been turned, and the canvass is now blank. Rondo gets a fresh start and a chance to prove he's a start without the Hall of Famers and Doc around (once he gets healthy again that is). Stevens gets a chance to prove himself at the highest level. Expectations have been lowered but that just means opportunities are available for many.

Youth is another strength. Beyond Rondo the core of this team is made up of before-their-prime type players. Jeff Green, Avery Bradley, Jared Sullinger, Kelly Olynyk, Courtney Lee, and MarShon Brooks all have a great chance to develop into something special heading forward. Some could be stars, some could be solid rotation players, and some might just fizzle and not realize their potential. But they'll all get ample opportunities this year.

Finally, I really think that Brad Stevens has a great chance to be a big success in Boston. Everything that I've read about him has been 100% glowing words of admiration about the man. In fact, I've been very pleased with every move that he's made this offseason (from saying the right thing in interviews to reaching out to players to hiring the right coaching staff around him). I half expect him to come riding in on a unicorn carrying a pot of gold and a real life Leprechaun perched on his shoulder.

By every account Stevens is bright, hard working, and humble enough to know his own limitations and when to ask for help. He's got a strong support structure and a long term contract to provide him with ample security. The wins may or may not come this year, but I have high hopes that they will sooner than later and for a long time.

3. What are the team's biggest weaknesses?

Lack of star power is going to hurt this team. It is a league ruled by stars. All title teams have at least 2 star players and usually 3. We've got one so far and he's going to be out for a while (and probably less than 100% after that). In my mind, the biggest difference between star potential and legit star is simply consistency. There will be nights when Jeff Green looks like a star, but can he keep it going night-in-and-night-out for a whole season? Can Bradley develop his offensive game enough to keep his defense on the floor as much as possible? Can Brooks and Olynyk prove themselves on defense enough to contribute their scoring on offense? Can Sullinger put his off court problem behind him and develop into a force on the court? Can Brad Stevens make the transition to the NBA game and adapt to the nuances in time to make a positive impact on this year?

More: All of SB Nation's NBA previews to date

There are a lot of questions for this young group. I'd like to think that the answers are all in the affirmative but I can't guarantee that. And even if everything breaks right for this group, I think the upside is still a lower seed in the playoffs. Again, how you look at that result might depend on your perspective (glass half empty/full).

4. What are the goals for this team?

a) Get Rajon Rondo (and Sullinger and Olynyk and anyone else that isn't 100%) healthy and fully functioning again.

b) Develop pre-prime players (see above).

All of the above puts the Celtics in a stronger position to make trades in the future. The better each player gets, the better trade chips we'll have. And players we don't use for trades will form a strong foundation and/or support structure for the guys we bring in.

Right now the roster doesn't make sense (too many shooting guard and power forwards, too few stars) so when the other shoes drop and the next moves are made, we want to be in a good position moving forward. The journey back to the top starts with a few small steps in the right direction.

5. Does Rajon Rondo HAVE to be traded as Mark Stein and others have suggested?

In a word, no. I reject the notion that the only way this can go is a full tear-down job. I will admit that it is an option we must consider. Especially if things don't go according to plan in other areas. If we don't develop guys right or if people get injured or we simply can't get the right trade offers we're looking for, then trading Rondo for the right deal has to be on the table as an option. I just don't agree that it is the only option.

First of all, that is a terrible trading position to be in. Teams know we are rebuilding and Rondo is still hurt, so at the moment they wouldn't give us a very good package in return. Even if we wait until he proves he's healthy, some will point to his reputation as being difficult to coach and his lack of outside shot as being reasons that they can't be the farm on him.

For me, I'd want the farm and a few cows and chickens to boot. Rondo is a legit star in his prime that has many productive years ahead of him. He's a smart guy and he should know that he's got his best opportunity to maximize his career here in Boston. He has a wonderful opportunity to develop a team along side Brad Stevens that utilizes his unique skillset in ways he never has been able to do before.

Sure it will take a little bit of patience for a guy that has only spent one year on a rebuilding team. But I know that one of the messages that Kevin and Paul and even Doc had to deliver to Rajon is that all great players have to go through their challenging years. It is part of the process of growing and developing as a complete player.

So if Rondo is on board and Ainge values him as much as I do, I don't think we "have to" trade Rajon Rondo at all.

Bottom Line: November is going to be a very, very hard month with 19 games, 6 back-to-backs, and 11 road games. All (likely) without Rajon Rondo. They might very well find themselves in a deep hole that would take even a veteran team a lot of time to dig out of. I'm gonna predict that this team is not one of the worst 5 teams in the league but they also won't make the playoffs.