Rondo expected to return as the Celtics host the Lakers

Rajon Rondo is projected to make his long awaited return as the Celtics host the short handed Los Angeles Lakers.

Share All sharing options for: Rondo expected to return as the Celtics host the Lakers


Rajon Rondo is projected to make his long awaited return as the Celtics host the short handed Los Angeles Lakers. This is the first meeting between these two teams this season. They split the series last season with each team winning on their home court.

The Lakers have 4 players out with injuries and got even more short handed when their leading scorer, Nick Young, was suspended for 1 game after throwing a punch at Phoenix's Goran Dragic in their last game.

All eyes will be on the Celtics in this game as Rondo makes his long awaited return, almost a year after he tore his ACL on January 25 of last year. The Celtics also added Joel Anthony and Chris Johnson over the last couple days and they may or may not be in uniform and on the court for this game.

Although much of the luster has worn off of the meeting between these two long time rivals, with both teams closer to the bottom of the league than to the top, it is still the Lakers and the Celtics and that rivalry will always be special. Beat LA!!!!!!!! 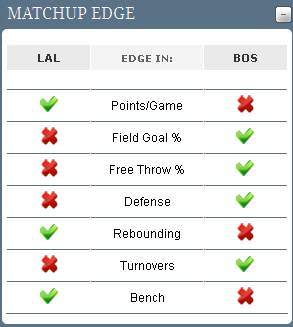 Avery Bradley vs Jodie Meeks
Meeks is averaging 13.9 points, 2.9 rebounds and 1.6 assists per game. He is capable of putting up big numbers, especially with Nick Young being out. In his last game, he scored 26, including 6 3-pointers.

Kris Humphries vs Pau Gasol
Gasol is averaging 15.7 points, 9.7 rebounds, and 1.5 blocks. He is always a threat to score and also to rebound and block shots.

Keys to the Game
Push the Ball - The Celtics have had success when they push the ball up the court quickly before the defense can get set. With the Lakers being short handed, it will be even more important to run and push the tempo.

Rebound - The Celtics were very aggressive on the boards in their last game and they have to continue to crash the boards as a team to give themselves more second chances as well as to prevent the Lakers from getting extra shots.

Focus for 48 Minutes - The Celtics still struggle with lapses in games. Against the Raptors, they gave up most of an 18 point lead but held on to win. They have to keep their focus for all 48 minutes and figure out how to avoid those lapses.

X-Factor
Rondo
With Rajon Rondo set to finally return to the court in this game, all eyes will be on him. How his teammates respond to his leadership on the court, and how the team dynamics change, will be interesting to watch.