Week In Review: Celtics shake things up with a trade and lineup change

The Boston Celtics snapped their nine game losing streak, but they are now only 14-27 at the halfway point of the season.

Share All sharing options for: Week In Review: Celtics shake things up with a trade and lineup change

Are the wheels coming off the Boston Celtics' season after losing 13 of their last 15 games, or has the return of Rajon Rondo given them hope? In any case, the Celtics had an up-and-down 1-2 record this week, with a streak-ending win against the Raptors, and losses against the stacked Rockets and the depleted Lakers.

Star point guard Rajon Rondo made his return to the court on Friday and was surprisingly named the 15th captain in Boston Celtics history. Rondo, who didn't find out until he was introduced into the game, said that it's an honor to follow Paul Pierce. "I'm just definitely honored, following Paul Pierce, who was our last captain, and he held the seat for a long time." He said, "It's definitely something I'm very proud of. I think I've earned it, but at the end of the day, you know, it's not just me as a leader, it's honestly a lot of guys who lead this team."

In 19 minutes, Rondo scored 8 points on 4-of-9 shooting, to go along with 4 assists, 2 rebounds, and 2 steals. Other than a slow first quarter and a bumpy final couple of minutes, Rondo looked good in his 2014 debut. He said he felt good, too, but isn't sure if he'll play in back-to-back games yet. It'll be interesting to see how the Celtics manage Rondo's minutes going forward.

On Monday night, Brad Stevens put Jared Sullinger in the starting lineup over Brandon Bass, but it wasn't much of a surprise considering the statistics supported that change. Stevens, who is known as an advocate of advanced analytics, might have noticed how the stats supported what he was seeing with his own two eyes.

I figured that I might as well ask him if Drew Cannon and statistics team influenced his decision to change the starting lineup. As expected, he didn't reveal too much. "[Cannon] always influences us, as does the whole statistics group." Stevens continued, "But, you know, at the end of the day, it may influence, but it's still gonna be more than just the numbers that go into those decisions."

Sullinger just gets it

Before the year, Brad Stevens said he wanted this season to be one of progress, where his young players improve each and every day. I think it's important that a winning attitude or culture is manifested despite losing. So, before Wednesday's win, I asked Jared Sullinger if he believes that's happening right now. Here's the full quote:

"Honestly, going on this losing streak, we could've crumbled. You see teams crumble and you see teams go out there and go for themselves. But as you look more and more into this team, you see guys fighting, playing hard, and being unselfish. That is a sign of great guys in the locker room, but also a sign that we have a great coach that is constantly coaching us instead of just giving up."

Sullinger, now only 21 years old, spoke like a veteran, with the confidence and assurance that everything would be okay. That night, he went out and had a career game with 25 points and 20 rebounds. Despite unspectacular performances against the Lakers and Rockets, it appears that Sullinger is close to fully recovered from his hand injury.

CelticsBlog's Alex Skillin recently published a terrific article about the Celtics' inability defending the three-pointer. Unfortunately Boston had a hard time doing that all week, which is one reason why they lost two games, and almost blew it versus the Raptors. Here is the opponent's total shot chart from all three games: 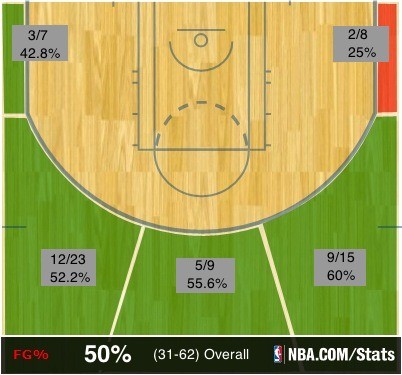 That 50 percent is never going to cut it. Without watching the film, it's hard to say exactly why the Celtics have had so much trouble as of late -- but I know it's not solely because the other team is "just hitting shots." In the first half versus the Lakers, Boston was consistently closing out, running shooters off of the three-point line. In fact, it's easy to remember a few instances when Ryan Kelly would be forced into a one-dribble pull-up jumper.

But in the second half, Boston was too slow to close the gap, which allowed the Lakers just enough breathing room to make a comeback and win the game. The Celtics must consistently defend in order to win games,

Never afraid to pull the trigger, Danny Ainge dealt Jordan Crawford and MarShon Brooks to the Golden State Warriors in a three-way deal with the Miami Heat. Boston received a potential first round pick in either 2014 or 2015, and the overpaid Joel Anthony.

Some have called it a shortsighted move, but I'd like to think that Danny Ainge is entering the lottery for a chance at a non-lottery draft pick. Huh? Well, Ainge traded two players didn't have a future with the team for the chance at another draft pick/asset in the draft.

The "lottery/chance" part plays in, because in order to receive a first rounder from this deal, the 76ers must make the playoffs in either 2014 or 2015. It honestly wouldn't surprise me if that happened this year, and the 76ers snuck into the playoffs with 33 wins.

A few weeks ago Gerald Wallace said that he has been a mentor to Jeff Green this season. Around that same time I wrote an article, "Driving Jeff Green," which detailed his inefficiency driving to the basket. Since Wallace had a lot of success attacking the rim in the prime of his career, I thought that he might've been helping Green improve his footwork.

When I asked him about it, he said, "Oh, man, those are physical things. I'm more of the mental guy. Whatever he wants to talk about, we can talk about." Wallace explained, "But, you know, he's gifted, I don't really think he needs much help with that. It's just understanding his gift and his talent."

Jeff Green is a certainly a good player, but "understanding his talent" has been the story going back to his college years. Green has never lived up to his complete potential, and I think it's time to accept him for what he is: a good, team-orientated player, that plays hard on defense, and will occasionally explode with unbelievable offensive performances.

Is Olynyk turning the corner?

I'll be honest; I'm not as impressed about Kelly Olynyk's career-high 25 point performance against the Lakers as most people are. Look, he had a great game, but it was against Ryan Kelly, a fringe NBA player, who couldn't even defend well at the college level. And how quickly we forget that Kelly had a career night when he was defended by Olynyk the majority of the game. "KO" still has a long way to go on the defensive end of the floor, and showed that on Friday against the Lakers.

Despite that, I was still encouraged by a few things from Kelly Olynyk. For one, he had seven assists, since his ability to pass from the high post has finally be taken advantage of. In my opinion, Olynyk was one of the best passing big men in all of college last season, and he deserves to have the ball in his hands more often. Secondly, despite being defended by Ryan Kelly, I thought Olynyk showed more confidence pulling up from mid-range. He looked smooth for the most part, and I expect that to translate this into more consistency the rest of the season.