The Celtics head out on the road to visit the Magic, one of the 4 teams in the league with a worse record than their own.

Share All sharing options for: Rondo and the Celtics look to get back on track vs the Magic

The Celtics head out on the road to visit the Magic, one of the 4 teams in the league with a worse record than their own. The Magic have lost their last 10 games while the Celtics lost 9 in a row before beating the Raptors, only to land back in the losing column against the Lakers.

This is the 3rd of 4 meetings between these two teams this season. The Celtics won both of the first two games, one in Boston and one in Orlando. The Celtics are 5-15 on the road while the Magic are 7-13 at home.

The Celtics and the Jazz are tied for the 4th worst record in the league. Philly is 3rd from the bottom while Orlando and the Bucks occupy the bottom two spots. The Celtics should win this game but then, you never know because they have two ex-Celtics who may be looking to get some payback to their former team.

Big questions for this game: Will Rondo get more than 20 minutes? Will Chris Johnson and Joel Anthony play and will they help the team? Will Jeff Green disappear or have a good game? Will Big Baby have a career game against his old team or will he try to do too much? Will Dick Bavetta actually make any good calls? 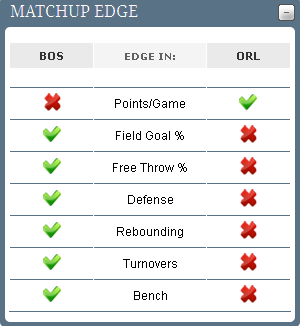 Rajon Rondo vs Jameer Nelson
Rondo is back but will likely have a minutes restriction once again in this game. Nelson is averaging 13.5 points and 6.5 assists per game and has hit many a big shot against the Celtics in the past. Rondo's defense will be needed along with his ability to run the team.

Jeff Green vs Arron Afflalo
The Celtics will need a big game from Jeff Green on both ends of the court. Afflalo is averaging 20.9 points, 4.4 rebounds and 3.9 assists and Green will need to keep him from having a big game.

Honorable Mention
Avery Bradley vs Victor Oladipo
A bright spot for the Magic this season has been the play of their first round draft pick who is the reigning Rookie of the Month. Avery will have his hands full on both ends of the court against Oladipo.

Keys to the Game
Run, Run, Run - The Celtics have shown that when they run, they are capable of playing very well, and they need to run the ball up the court before the Magic's defenses can get set up. With Rondo back, they should run on every possession.

Play 48 Minutes - The Celtics are still struggling to put together a complete game. In almost every game, they have had a spurt where they slow the game down and go through an offensive slump. They need to play for 48 minutes and not let up.

Be Aggressive- The Celtics must be aggressive in going to the basket, in diving for loose balls, in going after rebounds and on defense. The more aggressive team will usually get the calls and in the end, the win.

X-Factors
Rondo, Tanking, and the Bavetta Factor
Rondo's conditioning will be improving each game and the rust will be shaking off his game. We should see evidence of that in this game. Also, the Magic seem to be tanking and so if the Celtics just play well, they should get the win.
Dick Bavetta is well known to try to keep games close and if the Celtics get a big lead, they may have to deal with a rash of bad calls and no calls. In the last game that Brothers and Bavetta called for the Celtics, Bavetta failed to make an obvious call, even though he was in position to do so and Brothers made the call from across the court.