The Celtics travel to Chicago for the first of 3 games against the Bulls this season. Both teams are without their All Star point guards.


The Celtics travel to Chicago for the first of 3 games against the Bulls this season. Both teams are without their All-Star point guards due to ACL tears. The Celtics' Rondo is expected to return soon. The Bulls' Rose will be out the rest of the season once again.

The Celtics are still hanging on to the 8th spot in the East, tied with Detroit for the 7th spot and just half a game behind Charlotte for 6th. They are also just half a game in front of Chicago, who is in the 9th spot. Toronto has moved 1 game ahead of the Celtics for the Atlantic division lead.

Both teams are coming off a loss with the Celtics losing on Tuesday to the Hawks and the Bulls losing to the Raptors. Both teams are 4-6 in their last 10 games. The Celtics are 5-9 on the road while the Bulls are 7-7 at home.

Both teams had problems in the 4th quarter of their last game. The Celtics blew an 18 point lead to lose by 1 point to the Hawks. Carlos Boozer, Joakim Noah and Kirk Hinrich combined to go 4 for 27 overall Tuesday, and Chicago missed 20 of 24 shots in the fourth quarter on their way to a loss to the Raptors.

Be sure to check out the chat during the game and don't forget to tune in to the CLNS Radio Post Game Show right after the game. Your broadcast crew is Nick Gelso and Matthew Fahey. Matt Rury will also be stationed in the chatroom at CelticsBlog and manning the CLNS Radio social media outlets. As always, they will be taking your calls throughout the entire broadcast. 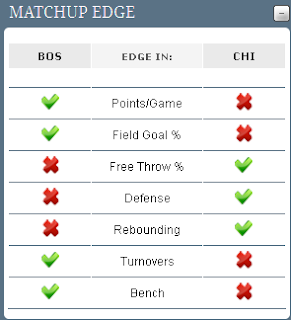 Jared Sullinger vs Joakim Noah
Noah will be a tough matchup for the Celtics. He is averaging 10.7 points, 10.0 rebounds, 3.4 assists and 1.14 blocks per game. Jared has been playing with a hand injury and he re-injured it against the Hawks and even at 100%, he would have trouble staying with Noah.

Jordan Crawford vs Kirk Hinrich
Crawford has alternated between efficiently running the team and over dribbling and chucking. Hinrich is a hard nosed player and good defender and will take advantage of any lapses on both ends of the court.

Honorable Mention
Jeff Green vs Luol Deng
Green wasn't happy with sitting out the 4th quarter against the Hawks and so hopefully will put that anger to good use by upping his play in this game. Deng is playing very well, averaging 19.4 points, 6.9 rebounds and 3.9 assists. The Celtics will need Green to be at his best on both ends of the court.

Keys to the Game
Play 48 Minutes - The Celtics have been getting off to fast starts and big leads. But, in the second half, they stop running, stop moving the ball, and stop going to the basket. They have to continue to do what works for 48 minutes and not slack off in the second half.

Set the Pace - The Celtics have to run on every possession. Part of the reason they have given up big leads is that they stop running, stop pushing the ball inside, and stop moving the ball. They have to keep up the pace for the entire game.

X-Factors
On the Road and Focus
The Celtics will be on the road and so they need to keep their focus through a hostile crowd and arena. They also have some internal distractions to overcome such as Bass and Green's reported altercation on the bench in their last game. They have to regain their focus and keep it on the game at hand.

Official Report
Bill Kennedy
Bill Kennedy’s 15 seasons of NBA officiating experience include 924 regular season, 54 playoff and five NBA Final games. In addition to his NBA experience, Kennedy has five years of officiating experience in the CBA, including working the 1996 and 1997 CBA Finals. He also officiated two games in the WNBA Finals in 1998, and has 15 years of high school officiating experience in Arizona. The Arizona native attended Arizona State University after graduating from St. Mary’s High School in Phoenix. While a student at St. Mary’s he was named Knight of the Year in 1984 for his athletic achievements. Kennedy’s charitable efforts include working with former NBA official Tommy Nuñez’s tournament, "The National Hispanic Basketball Classic," to help raise money for inner-city kids. He also works with the Boys & Girls Club of Phoenix. He was named "Youth of the Year" twice by of the Boys & Girls Club of Phoenix and is now a lifetime member.

Celtics fans will remember Kennedy's run in with Doc Rivers that resulted in both of them being fined. Yes, David Stern fined one of his precious refs and certainly, Kennedy hasn't forgotten. Here is how Doc described the incident:

Doc was fined for criticizing a referee, but since the league fined Kennedy, they as much as admitted that Doc's criticism was deserved. Go figure. According to Tim Donaghy, Bill Kennedy is gay and his beef with Doc stems from Doc questioning his sexual orientation. With Doc out in LA, that should be in the past.

The Celtics are 2-0 this season and 8-2 with Kennedy in their last 10 games. They were 4-0 with Kennedy as an official last season. In all 4 games last season, the officiating wasn't bad. In a win over the Pacers two seasons ago, Indiana shot 31 free throws to 14 for the Celtics. When the Pacers were down 7, Kennedy called a bogus flagrant foul on Pietrus that gave the Pacers 2 shots and the ball. And if that wasn't enough he called a technical on Pietrus for protesting the bad call. In a 7 point game with 34 seconds to go, they handed the Pacers 5 points. The flagrant was later downgraded, which shows it was a bad call after all. One win this season was over the Cavs where the Celtics shot 26 free throws to 27 for the Cavs and the officiating was good. The second win was over the Wolves and the officiating was once again good. As with many of the refs, Kennedy can be very good or very bad depending on his mood. For the most part, over the past 2 seasons, he has been very good when calling the Celtics' games. The Bulls are 1-1 this season and 5-5 in their last 10 games with Kennedy. His home W/L record this season is 17-10.

The Celtics are 2-1 this season, with the win over the Nets in the preseason and a loss to the Grizzlies followed by a win over the Knicks. None of the 3 games had any calls that stood out one way or the other, which means that the refs stayed out of the way. The Celtics are 6-4 over their last 10 games with Tiven. All of the games he called last season were fairly well officiated.

The Bulls are 2-1 this season and 7-3 over their last 10 games with Tiven on the court. Tiven lives in Connecticut and he has a twin brother who is a big Celtics fan and who was shown in the crowd at the Garden in a game he officiated there last season. His home W/L record this season is 16-9.

Scott Twardoski
Scott Twardowski enters his third year as an NBA Referee having officiated 109 regular season games. Twardowski’s experience includes six seasons and 206 games officiated in the D-League. He also has four seasons of NBA preseason game experience and worked in NBA summer camps for eight years. He also has seven seasons of WNBA experience, working both the All-Star game and Finals. In addition to his professional experience, Twardoski officiated collegiate games for 12 years in the Pac 10, Big 12, Big Sky and West Coast Conferences and has 10 years of high school officiating experience. Twardoski worked as a teacher for five years in the 16th School District, Covington, AZ.