It wasn't too surprising when Marquette guard Vander Blue went undrafted in 2013 due to his unfinished game. At 6-foot-5, Blue is a tweener because he lacks the precise ball handling skills required to play point guard, and the reliable perimeter shot necessary to play shooting guard.

Yet, despite his shortcomings, Vander Blue probably deserved to be drafted because of his explosive first step, tenacious defensive attitude, and knack for coming up big in clutch situations.

After playing for five different teams since leaving Marquette, Blue finally earned his shot in the NBA. In the wake of injuries to both Avery Bradley and Jerryd Bayless, the Boston Celtics decided to give the 21-year-old Blue a chance by signing him to a 10-day contract.

Vander Blue was primarily a role player during his first two years at Marquette, but the Golden Eagles did reach the Sweet 16 in both seasons. But last year, Blue became "the man" during his first season as an upperclassman, and he responded by leading his squad all the way to the Elite Eight after clutch performances throughout the NCAA tournament.

After his junior year accomplishments, Blue decided to declare for the 2013 NBA draft, but he went unselected. Since then, he has bounced around the world playing basketball.

He first played with both Houston and Memphis on their summer league rosters, where he averaged 11.1 points, 4.1 rebounds, and 1.5 turnovers in 21.7 minutes per game. 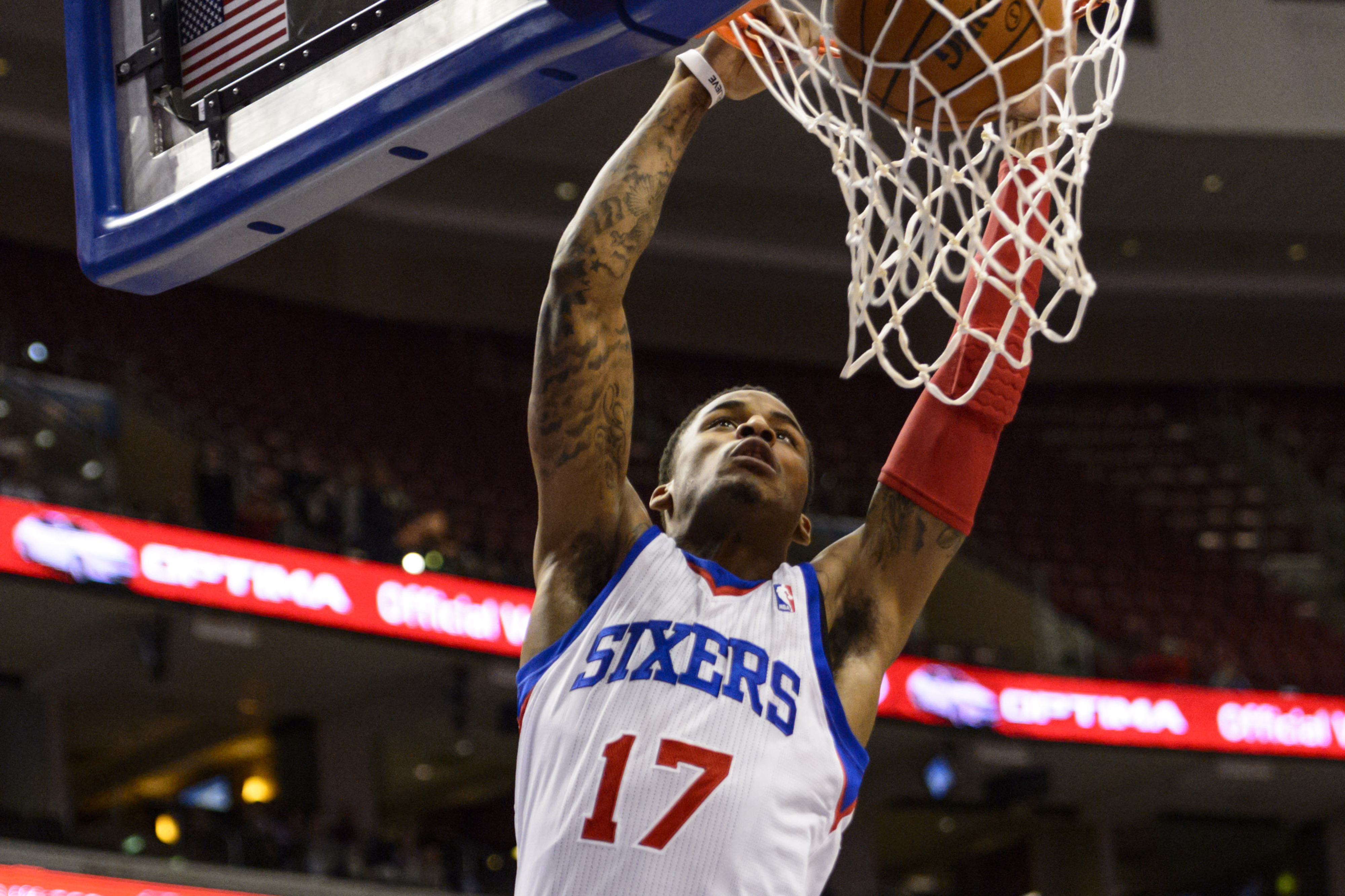 Blue was then signed by the Philadelphia 76ers and played five games with them in the preseason. There, he performed fairly well in limited time on the court. Blue averaged 6.2 points on 44 percent shooting in only 15.3 minutes per game.

Unfortunately for Blue, he was cut in late October, which forced him into signing with Maccabi Rishon Lezion, a team from the Israeli Super League. Blue struggled overseas, scoring 11.4 points per game on only 36.2 percent shooting.

After playing in only seven games with Maccabi, he left the team and came back to the United States, where he joined the Delaware 87ers of the NBA D-League.

Blue finally found success while playing in only four games with the 87ers, averaging 19 points, 4.8 rebounds, and 2.3 assists per game. In his last game, he helped the 87ers snap a 10 game losing streak, with 35 points on 11-for-23 shooting, as well as 6 rebounds and 4 assists. Blue had finally drawn the eyes of NBA teams towards him once again.

In only eight months, Vander Blue played on five different teams, but he will now join his sixth with the Boston Celtics.

Vander Blue is a 6-foot-5 combo-guard who plays at his best in a transition offense. When Marquette was playing with a fast tempo, Blue was difficult for opposing defenses to stop because of his volatile first step and high motor.

In transition, Blue shows headiness by filling the lane well, and then athleticism by often finishing with loud dunks, despite being undersized. Even though Blue isn't the best ball handler, his deficiencies are minimized in the open court, and he does a good job dishing the ball to his teammates.

Blue is able to create fast offense of his own because he is a hard-nosed defender and forces turnovers even if it doesn't show up on the stat sheet. He hustles hard, and moves his feet extremely well laterally to stay in front of his man. He also does a great job of jumping the passing lanes to prevent passes or force steals. However, he does need to improve on his ability to fight through screens. It's not a matter of effort, though, and I expect him to get better over time.

Interestingly, Blue didn't measure very well at the NBA combine, putting up only above average numbers on vertical jump and speed drills, which didn't help his chances of being selected on draft night.

Since Blue's measurements don't pop off the chart, I feel compelled to call him "sneaky athletic," because he has consistently shown that he can explode laterally and vertically. When taking his first step, it doesn't take long before he's at his top speed; and when he jumps, he gets to the rim quickly.

Unfortunately these athletic skills haven't been enough for him to have a consistent and efficient half court game, which is the primary reason he took so long to earn a spot on an NBA roster.

Blue can get out of control when handling the basketball. He dribbles the ball too high, limiting his mobility and ability to change direction, which therefore hinders his opportunities to find easier lanes to the basket. He must tighten his dribble if he wants to take his game to the next level.

He should also improve his vision and passing, as he averaged only 1.8 assists to 2.3 turnovers per game last season. Yes, Blue was expected to be a scorer first and a passer second, but a .79 assist/turnover ratio is not an appealing statistic to carry.

Even more alarming is Blue's lack of upper body strength. He only had four bench presses at the combine, which only proved that Blue avoided contact at Marquette because he didn't finish well with contact.

Though Blue is a nifty finisher with his right hand, he had a hard time scoring with any amount of contact in college. His lack of strength explains why he often shied away from other bodies in the paint, as he attempted less free throws per 36 minutes in his junior year than in his sophomore year.

Fortunately, Vander Blue significantly improved his jump shot. After struggling from the perimeter his freshman and sophomore season, Blue spent time during the summer of 2012 improving his technique. He found more consistency with his footwork, and fixed a hitch on his delivery, which translated onto the court. The chart to the right details his statistical improvements.

However, it will be vital for Blue to continue to progress. I still think he is erratic with his footwork, which explains some of his inconsistencies. And though Blue might be far more capable from mid-range than he was before, that is still the least efficient shot in the NBA. He must extend his range beyond the three-point line if he wants to maximize his potential.

What Vander Blue has that many players don't is a clutch gene. Time and time again throughout his college career, he came up with big shots down the stretch for Marquette. Just last season, he had game winning layups in the last second versus both St. John's and Davidson.

He also led Marquette in their tournament upset over Brad Stevens and the Butler Bulldogs, by scoring 19 points in the second half, which was highlighted by a huge three-pointer with very little time remaining.

After defeating Butler, Blue showed his potential as a leader and said, "These are the games we're built for: this type of environment, everything is against us. We just always find ways to pull it out and just show our heart and togetherness, because it's not about individual on this team, it's about fighting for the next person."

With that type of personality and work ethic, it's no surprise that Vander Blue has been impressive in his development as a basketball player. The only questions are: What is his ceiling? How much better can he get?

Honestly, the answers are unknown, but I do know that he has worked hard to get to where he is, and I think it's only a matter of time before he fixes the other facets of his game. 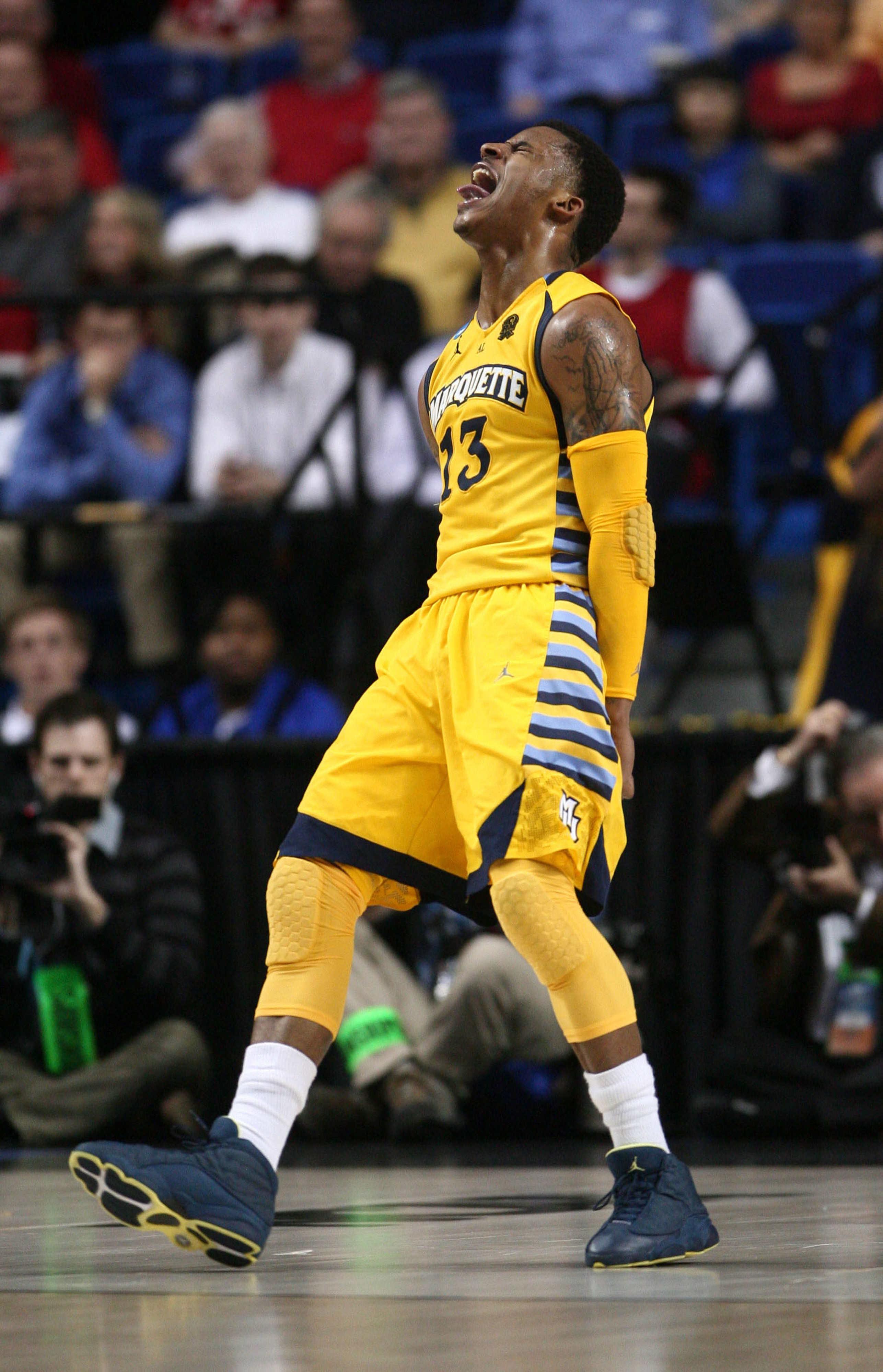 I think NBA teams made a mistake letting Vander Blue sit stagnantly as a free agent for so long. He has far too much raw talent for him to not be on a roster. He may never become a starter, but he has all the tools to become a quality role player. What he needs is terrific coaching, which will help him refine his skillset to make him more efficient as a player.

It's possible that the Boston Celtics are that team, but no one really can say for certain that they will retain him after his 10-day contract expires. With both Bradley and Bayless out with injuries, Blue could see playing time in the backcourt, but he will need to succeed immediately if he receives the opportunity.

At the least, the Boston Celtics acquired a player that can be plugged right into their offense as another combo-guard. His speed in transition should provide the Celtics with a spark off the bench, and the potential for a spot on the roster going forward.