The Celtics expect an emotional welcome for Kevin Garnett and Paul Pierce as they return to the Garden for the first time since the trade.

Share All sharing options for: Forever Green - Welcome back Truth and Ticket


The Celtics welcome Kevin Garnett and Paul Pierce to the Garden for the first time since the trade. It will be an emotional homecoming for them and for the fans who will undoubtedly show them much love when they are introduced.

This is the second of 4 games between these two teams. The Celtics lost the first meeting in Brooklyn 96-104. They will meet two more times in March.

The Nets have climbed into the playoff race and are currently in the 7th spot. They are just 2.5 games behind the Raptors for the Atlantic Division lead and the 4th seed. The Celtics in the meantime have dropped in the standings and are tied for the 3rd worst record in the East. They are also just 4 games out of the playoffs.

The Nets are mostly back to healthy with the exception of Brook Lopez. The Celtics are struggling with injuries to Avery Bradley and Jerryd Bayless. Jared Sullinger dislocated his finger in Friday night's game and knowing him, he'll probably be ready to play in this game, but the injury is on his shooting hand and is bound to affect him.

Brad Stevens has said that the Celtics may have a lineup change vs the Nets. My guess would be at the power forward spot if Sully is still hurting. But he may shuffle the whole lineup to match up with the Nets' small ball lineup. But we won't know until he gives some specifics and that might be at game time. I've listed the usual starters but they will more than likely be changed. 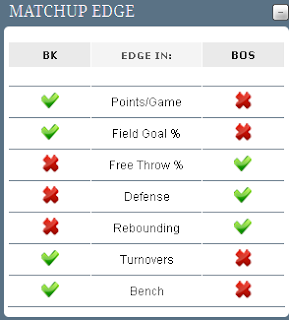 Jared Sullinger vs Paul Pierce
The Nets have been using a rather unconventional lineup with Paul Pierce at the power forward spot. The matchup between Pierce and Sully should be a good one if Sully is able to play in this one.

Kris Humphries vs Kevin Garnett
Just when KG thought he'd get to go back to his preferred position at the 4, Brook Lopez injured his foot and KG is back at the center spot. Humphries has been playing very well but whether he can get the better of the old master remains to be seen.

Honorable Mention
Phil Pressey vs Deron Williams
Deron Williams has been coming off the bench for the Nets and this matchup doesn't seem at all fair. Phil will have his work cut out for him against either the 6'7" Livingston or Deron Williams.

Keys to the Game
Defense - When the Celtics have lost, their defense has been in disarray. They haven't been playing defense as a team and have been allowing teams to score way too easily. They must get back to making tough team defense as a priority.

Run- The Celtics play best when they set the pace and run on every possession. They can get easy shots when they beat the defenses down the court. Now, the Celtics are the team with the young legs and should be able to tire the older Nets if they use that to their advantage.

Rebound- The Celtics have been doing a good job of crashing the boards as a team and they need to continue to do so. When they rebound as a team, including the guards, it gives them a much better chance of winning. The Nets have a lot of size and so it won't be easy. The Celtics will need to put out extra effort if they want to win the rebounding battle.

Go to the Hoop - The Celtics have been shooting the ball well at times, but they tend to fall in love with the long jumpers. And invariably they hit a dry spell when they can't hit any of their jumpers. When they take the ball inside, good things happen. They either get an easy basket, draw a foul or have an open man to pass out to. They have to get into the paint and not depend on jumpers.

Take Care of the Ball - Whether it was a lack of focus or the Thunder's defense, the Celtics turned the ball over way too many times on Friday. They need to keep their focus and take better care of the ball. Turnovers lead to easy baskets for the opponents.

Be Aggressive - The Celtics were too laid back and didn't put out the effort in the loss to the Thunder. They need to get their aggressiveness back and drive to the basket, dive for loose balls, go after rebounds, and be aggressive on defense. The Celtics also need to take advantage of the emotional state of Pierce and Garnett after the video tributes and aggressively go at them.

X-Factors
Focus and Emotions
Emotions will be running high on both sides and the team that can keep their focus and control their emotions the best will more than likely get the win.