After a strong performance at the Orlando Summer League, Kelly Olynyk entered his rookie season with some big expectations. How has he done so far?

Kelly Olynyk came into his rookie season with the Celtics with some pretty high expectations. The Gonzaga product had been one of the Orlando Summer League’s best players, averaging 18 points, 7.8 rebounds, and 2.4 assists per game over five contests. This came after Danny Ainge had traded up to nab Olynyk in last June’s draft and a few observers labeled him with some rather unfair Dirk Nowitzki comparisons.

Now that we are more than halfway into Olynyk’s rookie season, we finally have some solid (if limited) evidence of what the 7-foot big man can do at the NBA level. The 22-year-old did miss 10 games earlier in the season, and he is still fighting to get consistent minutes, so Olynyk’s development is by no means near completion.

Even so, we can draw some conclusions from Olynyk’s first 36 games as a pro. What do the stats and our eyes tell us about Olynyk so far?

Well, there is little doubting the Canadian native has struggled with the speed of the NBA game. Brad Stevens has brought him along slowly, and Olynyk has played over 35 minutes just once since returning from injury on December 13. As such, his per game stats aren’t terribly impressive (6.6 points, 4.3 rebounds, 1.5 assists per contest), but when measured per 36 minutes (13.0 points, 8.4 rebounds, 3.0 assists) Olynyk’s rookie performance becomes a bit more promising.

The 7-footer’s biggest problem on offense has been efficiency, as his 41.6% field-goal percentage and 29.8% three-point percentage are nothing to write home about. As his shot chart indicates, Olynyk has been inconsistent from nearly everywhere on the court: 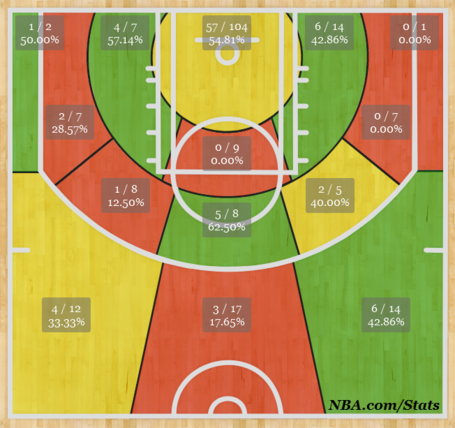 Olynyk’s performance within the paint and at the rim has been strong, though. According to NBA.com, he is shooting 61.0% within 12 feet, a mark comparable to scorers like Kevin Durant and Dwyane Wade and also similar to fellow big man Al Horford. Olynyk has been even better when shooting near the basket, making 69.4% of his shots at the rim, according to Basketball-Reference. This is among the best marks on the Celtics, ranking ahead of Jared Sullinger (who is shooting 59.6% at the rim) and Brandon Bass (62.0%) and just behind Gerald Wallace and Kris Humphries.

When we move further out from the basket, however, Olynyk’s shooting performances worsen, with Basketball-Reference indicating that he has made just 29.2% of his jump shots in 2013-14. This number should improve down the stretch for Olynyk, who shot the ball well during his time at Gonzaga and will likely benefit if he can remain healthy in the season’s final months.

Dating all the way back to the summer league in Orlando, Olynyk has impressed with his passing ability. His 3.0 assists per 36 minutes demonstrate this fact, and there is no denying that he is a tremendous passer for his size. The big man could serve to cut down on his turnovers a bit (a common problem for any rookie, to be fair), but regardless, Olynyk is exceedingly comfortable with the ball in his hands.

Nevertheless, for a 7-footer, Olynyk hasn’t been the best rebounder. His 13.1% total rebounding percentage is by no means top notch. Furthermore, stats from NBA.com’s SportsVu data demonstrate that Olynyk has grabbed rebounds on just 52.4% of his chances—the third-lowest percentage on the Celtics. In one sense, Olynyk profiles best as a center at the NBA level, but I wonder if his subpar rebounding abilities will ever allow him to excel as a center.

In many ways, Olynyk’s limitations and weaknesses all come to a head on the defensive end. Thus far in 2013-14, the Celtics defense has performed noticeably better with Olynyk on the bench (103.6 defensive rating) than on the court (108.3). Much of Olynyk’s defensive deficiencies begin with his lack of quickness and athleticism, something our own Kevin O’ Connor wrote the Celtics are trying to improve.

At the moment, Olynyk struggles to guard many of the quicker power forwards in the league, and his defense at the rim leaves much to be desired. According to data from NBA.com’s SportsVu, Olynyk has allowed opponents to shoot 60.3% at the rim, which is the second-highest mark on the Celtics behind only Avery Bradley. These issues point to some of the more crucial weaknesses in Olynyk’s game—he isn’t quite quick or athletic enough to guard many of the league’s top power forwards, and his strength and rebounding aren’t quite on par with that of a typical NBA center.

Some of this can no doubt be improved upon. Olynyk is only 22, and he will continue to get stronger. And the Celtics have already identified improving Olynyk’s quickness and agility as a top priority.

All in all, Olynyk’s shortcomings are typical of most NBA rookies. Like many young big men, Olynyk will need to work on improving his jump shot, both from the mid-range and perimeter. His success at the rim and from in close demonstrates a player who already has a soft touch and a nose for finishing.

The 22-year-old might always be a slight liability on the defensive end, but more time spent adjusting to the speed of the NBA game and in the weight room should help him improve. If he can stay healthy and get some consistent playing time down the stretch, Olynyk should be in a good place heading into the offseason. Ultimately, it will be about how much work Olynyk is willing to put in to improve his game. Considering how much he improved in a short period of time at Gonzaga, this bodes well for both Olynyk and the Celtics.

Alex Skillin is a regular contributor to CelticsBlog. He writes, mostly about baseball and basketball, at a few other places across the Internet. You can follow him on Twitter at @AlexSkillin.