The Boston Celtics lost their third game in a row after getting destroyed by the New York Knicks, 114-88. Carmelo Anthony led New York with 24 points in only 28 minutes. Boston is now 15-32, which is the fourth worst record in the NBA.

The Celtics played lackadaisical defense in the first half and allowed three extended runs to the Knicks, of 15-0, 12-2, and 18-6. Even though Boston had a nice 11-0 run of their own, they still trailed at half, 63-37. New York shot 61.5 percent because they were getting easy shots at the rim, because of Boston's bad pick-and-roll defense. Not to mention the Celtics' inability to closeout on the three, where the Knicks shot 6-of-11.

Brad Stevens' team has made a habit of attempting valiant comebacks, but not tonight. The Knicks sustained their lead in the second half and beat the Celtics, 114-88. Jeff Green led the Celtics with 14 points on 4-for-13 shooting, but four Knicks outscored him: Carmelo Anthony (24), J.R. Smith (17), Jeremy Tyler (17), and Tim Hardaway Jr. (16). Rajon Rondo once again struggled with only 7 points on 3-of-13 shooting, and 5 assists to 4 turnovers.

During the broadcast, Celtics play-by-play announcer Mike Gorman made note of this, but it's worth stating again: Avery Bradley is seriously missed by Boston. Bradley wasn't playing very well when he got hurt, but he was such a large part of the offense, accounting for 25.2 percent of their usage. The Celtics were scoring 95.2 points per game before AB injured his ankle, but have since went 1-5, scoring only 89.8 points per game.

Unless a player gets hot, like Jeff Green did versus the Wizards, they haven't been able to generate any consistent offense. Even with Rajon Rondo back, the Celtics half court offense looks totally out of sync. Without a true go-to player, teams like New York are able to dismantle Boston simply by hustling hard on defense. Ball-movement in the Celtics' motion-offense isn't enough to score points, and it's not working. If this team wants to win another five games this season, they need to change something.

The Celtics have lost a lot of games this year, but they have hustled hard, showing the heart of a competitor. Tonight, well, they looked like they were ready to go home, allowing simple lay-in baskets at the rim, and wide-open perimeter jumpers. The last time they were in New York, they beat the Knicks by 41 points, but tonight they were the team receiving a spanking.

That all started in the first half, when Boston was getting absolutely shred in the pick-and-roll. No matter how the Celtics defended on-ball picks, it seemed like the Knicks had an answer. They had 19 shot attempts near the rim in the first half, with a handful of them being alley-oops. Check out the Knicks' shot chart below, because it tells the whole story: 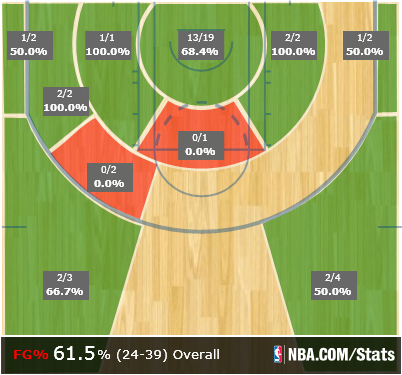 Brad Stevens can't be happy with his team's lack of focus executing his strategy, but he must also look at himself in the mirror. The Celtics have modified their pick-and-roll strategy almost every game this month, which doesn't help a team build chemistry.

At Butler, Stevens was able to successfully revise the defensive philosophy chemistry each match because his team had ample time between games; but in the NBA, it's hard to make such drastic changes because of the lack of practice time. Instead of complicating the defense, Stevens should simplify things until he receives players that are able to adjust every game.

Offensively, this team just isn't any good, yet the strategy hasn't really been altered. The Celtics continue to ignore the post, and instead settle for mid-range jumpers. Something needs to change or this team will continue to lose games -- maybe that's the point.

It's hard to find any silver linings from tonight's destruction against the Knicks, but there are few players who performed well. Chris Johnson scored 12 points on 4-of-7 shooting from three-point territory, so there is that. He continues to hustle, proving that he deserved this shot in the NBA. Rookie Kelly Olynyk actually played fairly well too, totaling 8 points and 7 rebounds in less than 20 minutes of play.

The Celtics will return to Boston tomorrow and face the Philadelphia 76ers to finish their schedule in January. At 15-31, the 76ers are only percentage points "ahead" of the 15-32 Celtics for the third-worst record in the league.