The Celtics return home to host the Sixers for the 1st of 4 meetings between these two teams vying for lottery position.

Share All sharing options for: Celtics host the Sixers in a battle for the top lottery pick

Game Thread l Chat
The Celtics return home to host the Sixers for the 1st of 4 meetings this season. The Celtics are playing in the second of back to back games but still should be able to win this game.

The Sixers and Celtics are tied in the standings for last place in the Atlantic Division. Both teams have lost their last 3 games. The Celtics are just percentage points ahead of the Sixers for the 3rd and 4th worst records in the East.

The starting lineups below are the ones given in the official Game Notes. However, Rondo may sit this one out because of back to back games. There's always the possibility that Coach Stevens will shuffle the lineup as well. There are calls to start Chris Johnson, since he was the only one actually playing hard against the Knicks.


Both teams are 2-8 in their last 10 games. The Celtics are 9-14 at home while the Sixers are 6-16 on the road. In the end, this could be a very ugly game with neither team actually trying to get the win. It also could get even uglier with Joey Crawford and Violet Palmer calling it. 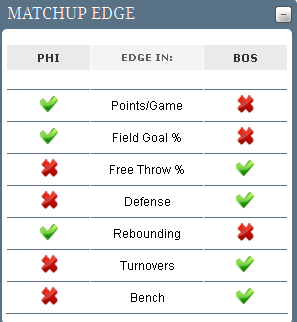 Gerald Wallace vs Michael Carter-Williams
Williams may be the best rookie in the league this season. He certainly is playing well, averaging 17.4 points, 5.6 rebounds, 6.7 assists and 2.41 steals per game.

Jeff Green vs Evan Turner
Turner is averaging 18.5 points, 6.1 rebounds, and 3.7 assists per game. He is also very quick and could give Green problems.

Honorable Mention
Jeff Green vs Thaddeus Young
After Green's big game against the Wizards, he has all but disappeared. He will need to defend against Young who is averaging 17.3 points, 6.4 rebounds 1.9 assists, and 2.1 steals.

Keys to the Game
Defense - As always, defense is key to winning. Period. The Celtics have been slipping on defense and allowing teams to score way too many easy baskets, especially in the paint. They also went from having one of the best perimeter defenses to allowing the Knicks to score at will beyond the arc. They must play better on the defensive end if they want to get back to winning.

Take Care of the Ball - The Celtics tend to turn the ball over way too much. The Celtics need to keep their focus and make smart passes and avoid the costly turnovers that almost always lead to a score for the other team.

Rebound - Rebounding is mostly effort and desire and when the Celtics put the effort on the glass it usually shows up in other areas also. They have to rebound on both ends to keep the Sixers from getting second chance points and to give themselves more chances to score.

Run - The Celtics have to run on every possession. Too often they walk the ball up the court. When they run, they get easy shots before the defenses set up. They have to set the pace right from the beginning and keep it up through the final buzzer.

X-Factors
Effort and Focus
The Celtics have to come out and play hard and be the team that wants the win more. This is a winnable game if they keep their focus and play hard as a team.