Despite having the third worst record in the NBA, the Boston Celtics haven't been a lousy defensive team this season. They rank as the 16th best team in points allowed per 100 possessions (103.4), but their numbers have slipped considerably in January.

Entering 2014, the Celtics were allowing only 96.8 points per game, which ranked in the top ten of the NBA, but various trades have rattled the team's chemistry and defensive cohesion has suffered. As a result, Boston has been a subpar defensive team this month, yielding 102.7 points per game.

At first glance, it appears that the lack of familiarity on defense has hurt the Celtics' ability to defend cohesively, which is as important as anything when containing the pick-and-roll.

After witnessing the Celtics get shred like cheese against the Knicks and Thunder, it became obvious that it was time to analyze what exactly they have been doing wrong when defending the pick-and-roll.

This article will work as an introduction, and will look closely at only one game: Wednesday's tragic 95-94 loss to the Philadelphia 76ers. Then data will be compiled before a comprehensive report is published towards the end of February.

Bird and McHale run the pick-and-roll.

The classic pick-and-roll (or pick-and-pop) has been used in the NBA for ages, but this play still gives defenses headaches today.

In the modern NBA, there are a number of different techniques used to defend the pick-and-roll, but more often than not, teams try to force perimeter jumpers. This is one reason why the league has seen a rise in a number of "stretch forwards" and "European-style players."

This can get complicated, but to put it simply, there are two general types of pick-and-rolls: middle and side. Defenses usually try to facilitate a side pick-and-roll towards the baseline or corner of the court, but the middle is where every team uses different techniques based on matchups, personnel, and situation.

The three most prominent techniques defending the middle pick-and-roll are hedge, ice, and switch. If a defense "hedges," the idea is to stop the ball-handler from turning the corner and going to the basket, but it forces the defense to rotate, which can be tough for inexperienced teams to handle.

What Boston has primarily been using this season, is a combination of "ice" and "switch." Switching is self-explanatory: When a pick is set by the offense, the two defenders involved simply switch off. The issue is that this can create mismatches in the offense's favor.

"Ice" is what most teams use today. Here, the on-ball defender angles their assignment into the big man defender, who is typically sagging back near the free throw line extended. This is meant to force the opponent into taking a low-percentage mid-range or three-point shot, as opposed to a potential layup.

I highly recommended clicking here and here for two well-written articles on how NBA teams defend the pick-and-roll.

But now that you know a little bit more about defending the pick-and-roll, let's take a look at how the Celtics played it on Wednesday night.

How did Boston defend Philly?

The 76ers scored a potent 1.10 points per possession while running 27 pick-and-rolls against the Celtics. More often than not, they were able to get what they wanted, as they appeared to pick apart the Celtics throughout portions of the game.

Click here to view the statistics for every single pick-and-roll defended versus Philadelphia.

Looking closely at the defense, it's clear that Brad Stevens instructed his players to concede the perimeter shot, since Philadelphia ranks 29th in the league shooting the three, at only 31.7 percent. Spencer Hawes is their only effective three-point shooter, at 42 percent on the year, close to tops in the league for bigs.

That strategy was the right decision, and it's exactly why Boston chose to "ice" 19 times out of the 27 total pick-and-roll chances. Remember, when a team ices, it means they are allowing the opponent to shoot perimeter jumpers.

Unfortunately, the 76ers still attempted 14 layups and dunks despite Boston's efforts to take away shots near the rim. In fact, eight of those 14 attempts came when the Celtics iced the pick-and-roll.

From the opening tip, Boston had major issues. On the first possession of the game, Philly point guard Michael Carter-Williams was able to exploit the Celtics' shoddy pick-and-roll defense for a layup. Here's the replay:

MCW first dribbled to the left side of the court before swiftly changing directions to his right, where Spencer Hawes was waiting with a screen.

Phil Pressey was slow to react and didn't properly adjust his body onto Hawes' left hip (to protect the middle), so MCW went right through the screen and into the heart of the defense. Jared Sullinger, who was in perfect position to steer MCW into the baseline, then had to adjust, but decided to play the "pop" on the now uncovered Hawes. 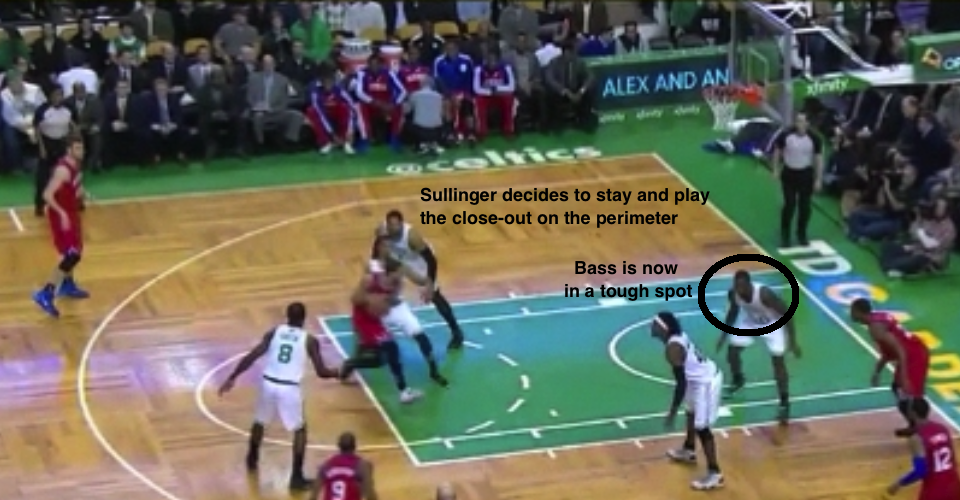 MCW turned the corner and finished the play with a layup. In the video, it might look like Brandon Bass is in la la land, but he's actually not. He's sticking to his man, because if he played the ball, MCW would have dumped it off for an easy layup or dunk. Instead, Pressey at least forced a difficult layup, though he made a bad play at the start.

But still, layups shouldn't happen when a defense plays ice.

Next, are another two examples where the Celtics are in solid positioning, yet still allow deep penetration and two high-percentage shots right at the rim.

In the first clip, the Celtics correctly ice the pick-and-roll, forcing Carter-Williams into the corner, but he continues to attack. Sullinger actually does a good job cutting off the angle (even though it happened too late), but that penetration cracked the defense, and eventually opened up a man for an easy dunk.

On the play after that, Jerry Bayless and Kris Humphries do a great job of forcing MCW into dribbling to his left. But as he dribbled towards the rim, Humphries looked a deer caught in the headlights. For whatever reason, he paused (probably in anticipation of a pass to the perimeter), but MCW instead continued all the way to the rim for a layup and the foul. 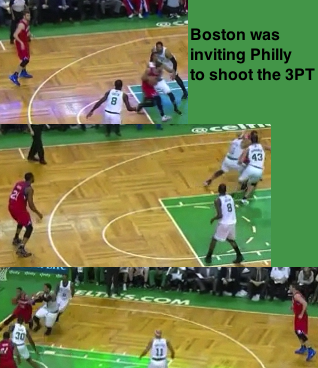 In all three instances above, the Celtics iced the pick-and-roll, and openly invited the 76ers to take an open shot on the perimeter. Just look at the distance between the defender and the shooter -- that's the space you give on the playground when your friend can't shoot worth a damn -- but that's the point, since the 76ers are one of the worst three-point shooting teams in the NBA.

Yet Philadelphia still had plenty of success shooting from beyond the arc against Boston, because they really only chose to pop when Spencer Hawes was the screener. Overall, they attempted six threes out of the pick-and-pop, with Hawes hitting four of them.

On the clip above, Bayless forces the ball-handler to the weak side, where Humphries is there to contain him. But their choice to ice left Spencer Hawes wide open, just like in all of the plays already outlined. Hawes, the 76ers' only good three-point shooter, is not the guy to leave so open.

This time he got the ball and took advantage, drilling one of his four three-pointers on the game.

Boston didn't hedge much on Wednesday, doing so only three times, because that technique requires a much more cohesive defensive unit. The 76ers scored twice when the C's hedged, with this being the best example:

Sullinger hedges on Hawes' pick, but he slips the screen and heads towards the rim, leaving Sullinger behind, who has his arms spread out to prevent an entry pass. Meanwhile, Brandon Bass is correctly shadowing Hawes, but that opens up Thaddeus Young for a simple alley-oop slam.

This lone example shows how much pressure can be put on a defense when hedging occurs, and that's precisely why Brad Stevens has opted to "ice" or "switch" for the most part this season. It's almost surprising when they hedge, since they do it so infrequently.

The Boston Celtics clearly must do a better job at communicating with each other on the defensive end. So much of defense is simply talking and hustling, and there has been much less of that as January was winded down.

It also doesn't help that the Celtics have won only three games since December 16th. It's not easy for any coach to get a losing team to buy into playing hard on defense, but if any coach can motivate his team, it's Brad Stevens.

The return of Avery Bradley will surely help, as will the natural growth of chemistry -- especially after the trade deadline passes.

In any case, with Boston's recent struggles defending the pick-and-roll, it will be interesting to see if some revisions are in store during the month of February.