The Celtics begin their tough western trip in Oklahoma City where the Thunder are once again without their all star point guard.

The Celtics begin their tough western trip in Oklahoma City where the Thunder are once again without their all star point guard. Russell Westbrook returned to the court to start the season but was experiencing swelling in his surgically repaired knee which required another surgery. It's been a rough couple of seasons for all star point guards.

The Thunder are playing in the second of back to back games after playing the Timberwolves in Minnesota on Saturday night. So, even though the Celtics are on the road, the fatigue factor may affect the Thunder a bit more than the Celtics.

Kendrick Perkins will be facing his old team, but there no longer any attachments there with Rondo still not playing and Doc, KG and Pierce elsewhere. I still love Perk. On the other side, Jeff Green will be facing many of the teammates he played with for the first 3 1/2 years of his career.

The Thunder won a hard fought battle against the Timberwolves last night, with their starters having to play right to the end. Kevin Durant scored 48 points, including the go ahead game winning 3. This may benefit the Celtics in that the Thunder starters may be a bit more tired because of having to play right up until the end and also they had lost 2 games previous to that win and if they were on a 3 game losing streak, they would be more desperate for a win. Even with all that, it will be a tough game for the Celtics to win.


Don't forget to check out the chat during the game for a great time and don't miss the CLNS Radio Post Game show right after the show. Your broadcast crew is Matt Rury and Mike "The Scotsman" Munger. Daniel Baker will also be stationed in the chatroom at CelticsBlog and manning the CLNS Radio social media outlets. As always, they will be taking your calls throughout the entire broadcast. 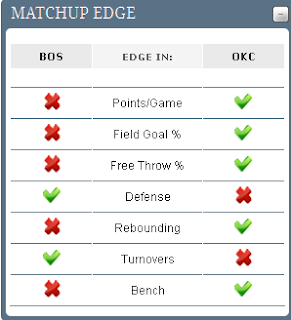 Jeff Green vs Kevin Durant
Jeff Green played alongside of Kevin Durant for the first 3 1/2 years of his career. Kevin Durant also happens to be one of the best scorers in the league and is almost unstoppable. Green will have his work cut out for him in trying to contain Durant. I expect Green to get a warm welcome from the fans as he was a fan favorite when he was there.

Jared Sullinger vs Kendrick Perkins
Perk isn't a big scorer, but he is a very good defender and rim protector. The Celtics need scoring from Sully but he will find it tougher to score with Perk defending him.

Keys to the Game
Run and Move the Ball - The only hope the Celtics have of getting any easy shots is to run on every possession and try to get their shot before the Thunder's defenses are set. They also much move the ball and find the open man. They will struggle to score if they lapse into over-dribbling and iso's.

Defense - The Thunder are a high scoring team, ranking 4th in points per game at over 105 a game. The Celtics can't count on simply outscoring them and will need to play tough team defense in order to keep the Thunder from putting points on the board.

Focus for 48 Minutes- The Celtics have shown for parts of games that they can play with anyone and they build big leads but then they seem to lose focus and turn the ball over and stop running and passing and give up those leads. The Celtics need to keep their focus for 48 minutes.

X-Factors
Fatigue and Focus
The Thunder are playing in the second of back to back games and had to travel after the game to get back to OKC. Fatigue could be a factor for them in this game.

Young teams tend to struggle with their focus on the road and the Celtics will need to work hard to keep their focus and not let the hostile crowd shake them.

The Celtics are 1-2 this season and 4-6 over their last 10 games with Capers. The win this season was over the Jazz and the officiating wasn't bad. The first loss this season was to the Bucks where the Celtics shot 15 free throws to 20 for the Bucks and the officiating was good. The second loss was to the Wizards and again the officiating wasn't bad. One loss last season was the Nets game that resulted in a brawl. Capers gave Doc a T for yelling to Rondo. They let the Nets get away with pushing and shoving and hard fouls the entire first half. The Nets shot 17 free throws to 5 for the Celtics in the first half and 3 of those free throws were on technicals. They did better in the second half after the brawl, but the refs' failure to call the game evenly in the first half led to the fight.

One win last season was over the Pacers. The refs let them play in the first half and then started calling more on the Celtics in the second half. The Pacers shot 28 free throws to 18 for the Celtics. Capers also called a flagrant 2 on KG, which resulted in his ejection. The league downgraded the flagrant 2 upon review which shows that it was a bad call. Another win was a 2 point win over the Bulls where the Bulls shot 17 free throws to 12 for the Celtics and they let a lot go both ways. The second loss last season was to the Heat where Miami shot 28 free throws to 13 for the Celtics and the game was pretty much called one sided for the Heat. The Thunder are 0-1 this season and 5-5 over their last 10 games. His home W/L record this season is 17-8.

Kane Fitzgerald
Fitzgerald has officiated 242 games in his four seasons as an NBA official. Fitzgerald started refereeing at the age of 18 at the high school level in New Jersey. Prior to the NBA, he had professional experience in the NBA D-League for four years and the WNBA for two years. He also refereed NCAA Division I basketball in the Ohio Valley, Atlantic Sun and Big South Conferences for two years.

You may remember Fitzgerald from three seasons ago when he gave KG a very quick pair of technicals (from about 30 feet away) and tossed him in the 2nd quarter of the Celtics 104-101 win over the Knicks (in which Amare scored 30). In another outing that season with the Celtics, the loss to the Bobcats in Charlotte, he tossed Stephen Jackson after 2 quick questionable T's. His quickness in giving technicals dates back to his days in the D-league where he was close to the top in calling technical fouls there as well.

Fitzgerald called the Celtics first game of last season against the Heat where the refs let the Heat get away with shoving and grabbing all night long which resulted in the frustration flagrant on Wade at the end. The other game he called last season was the Nets game that resulted in a brawl. The refs gave Doc a T for yelling to Rondo. They let the Nets get away with pushing and shoving and hard fouls the entire first half. The Nets shot 17 free throws to 5 for the Celtics in the first half and 3 of those free throws were on technicals. They did better in the second half after the brawl, but the refs' failure to call the game evenly in the first half led to frustrations and the fight. The Celtics are 0-4 this season with Fitzgerald, including 2 losses in the preseason. All 4 were fairly officiated with a few blown calls both ways. They are 4-6 in their last 10 games with Fitzgerald. The Thunder are 1-0 this season and 10-0 in their last 10 games with Fitzgerald. His home W/L record this season is 15-12.

Derek Richardson
Derek Richardson has officiated 943 regular season games and one playoff game, as well as the 2003 NBA Rookie Game in Atlanta, during his 16 seasons as an NBA official. Prior to joining the NBA, Richardson spent eight years
officiating in the CBA, including the 1996 CBA All-Star game and two games of the 1996 CBA Finals. Richardson played basketball at Los Angeles Southwest College and earned an Associate of Arts degree in Criminal Justice. He went on to earn a degree in Administration of Justice from Los Angeles Dominguez Hills. Richardson has volunteered with the South Central Los Angeles YMCA, assisting with youth basketball programs.