Expect a lot of hedging, showing, and blitzing from the Boston Celtics defense this season

Brad Stevens says the Boston Celtics will play more aggressive defense this season, but what does that really mean?

Share All sharing options for: Expect a lot of hedging, showing, and blitzing from the Boston Celtics defense this season

Usually media day is nothing but talk, with story lines hyping up the promise of a new year, but read between the lines and you'll discover that the Boston Celtics are going under a massive overhaul on the defensive end of the floor.

Boston had a below average defense last season, allowing 105.2 points per 100 possessions, which ranked 20th in the league. They had immense difficulties defending the pick-and-roll, in large part due to the fact they lacked a true center that could protect the paint.

For the first time in Brad Stevens' entire coaching career, he had his defense "ice," which basically means that the big man dropped back into the paint to try and force the ball handler or screener into a mid- or long-range jump shot.

But on media day, Stevens said he wants the Celtics to be more aggressive defensively.

From March, in the third part of the Boston Celtics pick and roll defense series, their "hedging" and "switching" defense is analyzed using a combination of film study and analytics.

From March, in the second part of the Boston Celtics pick and roll defense series, their prominent technique of "ice" is analyzed using a combination of film study and advanced statistics.

Hedge and Switch The Thin Ice

To use some basketball lingo, Stevens actually means to say "expect a lot of hedging, showing, and blitzing this season." Even though the Celtics' offense is going away from the old Doc Rivers pound-the-rock style, the defense is be reverting back to Doc's violent and forceful philosophy.

"We got better schemes than we had last year. Yes, we're gonna be more aggressive," said Brandon Bass, who has played in both Doc and Brad's defensive systems. "I think that's key for us being better on the defensive end. Having an aggressive mindset actually puts people back on their heels versus them attacking us."

Boston showed signs of aggressive defense during their five-game slate at the Orlando Summer League. Though the results weren't always encouraging, the intent was there, and that's all that mattered. If you read the book titled "Installing New Defensive Schemes For Dummies," you'd know the first step is to lay down the foundation during the summer. The staff did that, and now is the time to start building the home.

Boston is hedging a lot on the pick-and-roll, which is a huge change from last year when they iced nearly everything. Playing aggressively.

While there are weaknesses to this style of defense -- "ice" is in vogue in the NBA, with a large majority of teams utilizing it -- it does fit quite well with the roster personnel. That's why the entire Celtics crew has been boasting about it throughout the week, because what athlete doesn't like playing aggressively?

Consider that this style of pick-and-roll defense requires perimeter defenders who are strong and able to quickly fight through screens. Depending on if it's a hedge, show, or blitz, the screened defender will go under or over the screen, but either way it is crucial that they get back to the opponent with the ball.

With potential game-changing defensive players like Avery Bradley, Marcus Smart, and Rajon Rondo, the Celtics clearly have some bodies that could make this work. Even Phil Pressey, despite his physical limitations, is a feisty defender who could end up flourishing with this scheme.

But it all revolves back to the big man. Who is defending the paint? The screen defender and all the help defenders have much more responsibility here than they do when icing the play. It's arguable that "ice" is safer, and "hedge" or "show" is a gamble, but if the personnel fits, then the results can be abundant.

Here's a look at how Tyler Zeller could become the rim protector the Boston Celtics were looking for.

Boston added Tyler Zeller, whom has the tools to become a very good rim protector. Though he isn't a pure shot blocker, Zeller is quite good at positional defense. Whether it's his rotations or his ability to get in the paint and put his arms up without fouling, Zeller has proven that he can get the job done.

Zeller's individual production definitely exceeds his reputation, but that's because he played for the Cleveland Cavaliers, who for the past two years have had perimeter defenders that would rather glance at the pretty girls in the crowd than fight through a brick wall screen being set by a 7-footer -- actually, I can't blame them for that.

Because penetration so easily occurred, Zeller and other bigs on Cleveland were put under constant pressure, making their results look much worse than they probably should've been.

"I think that will help a lot," said Tyler Zeller when asked about how playing with stout perimeter defenders like Bradley and Smart can help his defense. "As [the opponent is] coming in, they're not coming in unchecked. They got somebody on their hip. They're trying to worry about them swiping the ball, so it makes my job a whole lot easier. Just gives the offensive player a lot more to think about."

Throughout the month of February I tracked every single pick-and-roll run against the Celtics to find out what was working and what wasn't for the team -- yes, I have no life -- and one of the minor discoveries was that Boston did a solid job of hedging against the pick-and-roll. Though they did it only seven percent of their chances in February, the Celtics held opponents to only 0.68 points per chance and a 37.5 shooting percentage.

Perhaps, coach Stevens and the coaching staff made a similar discovery over the summer, which might explain the drastic change in philosophy. It can't be stressed enough, because most teams "ice" the pick-and-roll nowadays. If Stevens is worried about creating offense in the half court, it's clear that he wants them to create it with their defense to force transition opportunities, which are the most productive chances a team can get.

In the first clip against Orlando from the montage above, Jared Sullinger "shows" on the pick-and-roll, forcing Victor Oladipo to take a few extra dribbles. Rajon Rondo does a terrific job of fighting over the screen and gets back to his man. 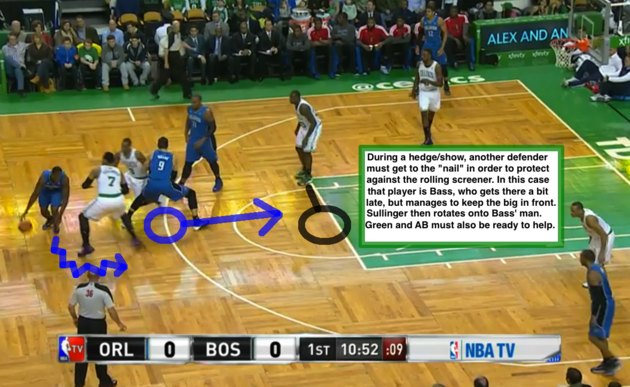 Bass is supposed to slide over to the "nail" (the middle of the free throw line) to stop the screener. Both Jeff Green and Avery Bradley need to be ready to also come over and protect the rim if Bass is unable to control the rolling big man. 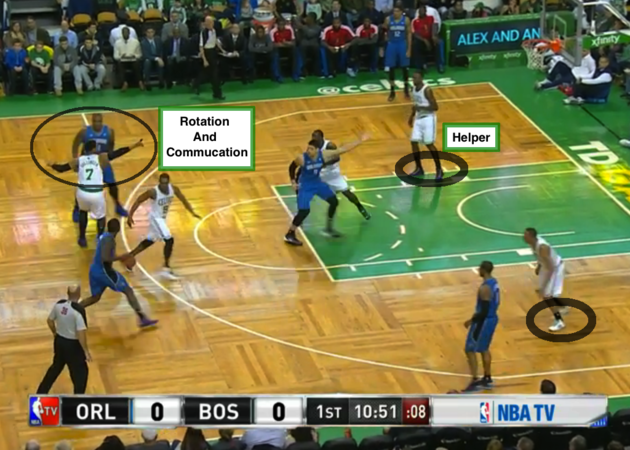 Here Sullinger communicates to Bass that he is switching onto Bass' original man, and Bass takes the rolling big. Even though Bass gets to the nail slightly late, he is still in a good position to make a play. Oladipo rightfully makes the pass anyway since there is only eight seconds left on the shot clock, but Bass plays stout post defense and forces a turnover.

But this year Bass and the whole group of power forwards won't always be stuck with the responsibility of picking up the screener. Zeller could see his effectiveness on this end rise since he actually has competent perimeter defenders to assist him. Even Vitor Faverani showed some potential last season, though keeping him from fouling is crucial.

And while Joel Anthony is somewhat of an afterthought to Celtics fans, he has had a long, successful career with Miami playing good, aggressive defense. Last year was truly his first season doing anything but hedging, showing, or blitzing the pick-and-roll.

The key for Brad Stevens is to get his bigs to be quick and decisive both physically and mentally. When they blitz, they must be able to communicate, make the right decisions, and individually recovery back to the post if there is no rotation. The defense must work as one cohesive unit.

There will be bumps in the road, so fans must not overreact if the defense looks like a jumbled mess during the pre-season. This defensive scheme is complex since there are so many moving parts, but the pay off is large if they execute it well once the regular season begins in late October.