Celtics are hosting the run and gun Suns in what promises to be a track meet.

The run and gun Phoenix Suns make their only visit to the Garden for this game. Suns coach Jeff Hornacek has the Suns playing well in a fast paced offense, just as Celtics coach Brad Stevens has the Celtics playing well in his fast paced system. This is the second game of a 6 game road trip for the Suns. They opened the trip with a loss to the Clippers on Saturday.

Against the Clippers, the Suns played well in the first half, playing to a 54-54 tie at the half. They were then out-scored 42-20 in the third quarter and lost the game 120-107. That sounds like the Celtics in their last 2 games. Both teams have lost two in a row and will be looking to get back on track with a win in this one.

Phoenix likes to play at a fast pace as do the Celtics, averaging 17.3 fast-break points - the second-most in the league. They also have a good second unit that allows the Suns to keep pushing the pace, even when the starters sit. Reserves Isaiah Thomas (averaging 16.7 points) and Gerald Green (averaging 14.6 points) are among the team's top three scorers along with guard Goran Dragic. In all 5 of Phoenix's wins, the leading scorer has come off the bench.

The Celtics bench is going to have to produce in this game on both ends of the court for the Celtics to get a win. Both teams are potent offensively, but their defense has been less than stellar. The Celtics are allowing 108.4 points per game (3rd worst) while the Suns are allowing 105.0 points per game (6th worst). Brad Stevens has been stressing defense in practice and hopefully that will sink in because the team that plays defense in this one will be the team that comes out on top.

Jared Sullinger vs Markieff Morris
Morris is averaging 13.8 points, 6.3 rebounds, and 1.2 steals a game. Jared has been playing very well and has averaged 17.3 points and 10.8 rebounds in his past four home games.

Honorable Mention
Evan Turner vs Gerald Green
Finally, years after being the Celtics with the 18th pick in the 2005 draft, and after years of bouncing around the league, Russia and the D-League, Gerald Green is finally getting it, and has been playing very well off the bench for the Suns. He can still jump out of the gym and so expect a spectacular dunk or two in the game if Evan Turner can't contain him.

Keys to the Game
Play 48 Minutes - The Celtics have been getting off to great starts and building leads but can't seem to close the game out. They need to keep their focus from the opening tip to the final buzzer and continue to play hard. No let ups!

Run, Run, Run! - The Suns are a running team and are 2nd in the league in fast break points with 17.3. If the Celtics want to keep up with them, they are going to need to run as well. This could be a fun game to watch.

Defense - Defense is always a key to winning. The Celtics will need to play tough team defense if they want to slow down the fast paced Suns offense. The Celtics rank near the bottom in points allowed, FG% allowed and 3 point FG% allowed. They need to correct this and make defense a priority if they want to get some wins. You can't win without defense.

X-Factors
Consistency and Home Court
These are two teams that like to push the pace but who also tend to slack off during games and stop doing what works. The team that is the most consistent in playing their game and that doesn't let up will get the win.

The Celtics are playing at home and need to get a boost from the home crowd. If they can feed off the crowd, it may get them over the hump and help them close out the game. 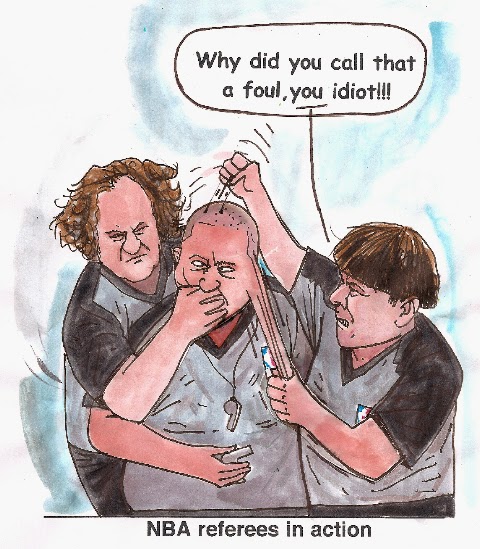 Ed Malloy - Malloy has officiated 764 regular season NBA games, 43 playoff games and four NBA Finals games, over the past 12 seasons. Prior to joining the NBA, Malloy officiated for one season in the NBA D-League, three seasons in the CBA and three seasons in the WNBA. He worked the 2002 NBA D-League Finals and the 2001 CBA Finals.
Malloy is very quick to call technicals and in the past has ejected Doc Rivers, Paul Pierce and Kevin Garnett for 2 quick techicals, all 3 of which had one or both rescinded by the league afterwards. He has called games in the past that were lopsided against the Celtics as well as some that were lopsided in favor of the Celtics so he is inconsistent in the way games are called. The Celtics are 2-8 in their last 10 games with Malloy while the Suns are 4-6 in their last 10. His home W/L record is 7-1.

Sean Corbin - The 19-year NBA referee has officiated 1,120 regular season NBA games and 54 Playoff games, along with the 2007 NBA All-Star Game, 1999 Japan Games in Tokyo and the 1996 Schick Rookie Game. Corbin spent the summer
of 2004 officiating basketball at the 2004 Olympic Games in Athens. Corbin’s resume includes four years officiating in the CBA and nine years of collegiate officiating experience in the Big East, Southern, Southeastern, Mid-Eastern Athletic and Metro Atlantic Athletic Conferences. He also has four years of high school basketball officiating experience. Corbin has been good in most of his games with the Celtics without any bad games standing out. The Celtics are 5-5 in their last 10 games while the Suns are 6-4 in their last 10. His home W/L record so far this season is 2-5.