Celtics look to get back on track as they host the injury plagued Pacers.

The Pacers visit TD Garden for the first of 4 meetings between these two teams this season. The Pacers swept the series last season, winning all 4 games by an average of 14.5 points per game. The Pacers are 0-2 on the road so far and 23-50 all time in Boston.

The Pacers are coming off a tough loss to the Wizards where they rallied from being down double digits to force overtime only to lose the game in OT. They are playing somewhat short handed with starters Paul George, George Hill, and David West out with injures. They are also missing Rodney Stuckey and CJ Watson who are also out with injuries.

Avery Bradley suffered a mild strain in his elbow in Wednesday's game vs the Raptors. After sitting out practice Thursday, he is considered to be probable for this meeting with the Pacers Indiana Pacers. On Thursday, the Pacers used a hardship waiver to sign point guard AJ Price because of all the injuries they are dealing with. Price is expected to be in uniform for this game.

Rajon Rondo vs Donald Sloan
Rondo is playing very well, racking up some impressive statistics. Donald Sloan has been playing well for the Pacers, averaging 15.6 points, 5.2 rebounds, and 6.6 assists. He is also shooting 34.6% from beyond the arc. In his last game he scored 31 points, pulled down 6 rebounds and dished out 7 assists.

Kelly Olynyk vs Roy Hibbert
Kelly is coming off one of his best games so far with 18 points on 7-11 shooting along with 13 rebounds. He is being encouraged to be more aggressive and to shoot more by both his coach and his teammates. He will have his hands full going up against Roy Hibbert, who is leading the league in blocks with 4.2 per game. He is averaging 12.4 points and 8.8 rebounds to go along with those 4.2 blocks.

Keys to the Game
Take Care of the Ball The Celtics simply must take better care of the ball. They are averaging 17.3 turnovers per game and are coming off a 28 turnover game. They have to do a better job of focusing on their passes as well as being more aware of the defense. They won't win many games turning the ball over 28 times.

Defense - Even though the Pacers aren't necessarily a high scoring team, the Celtics still need to play tough team and individual defense as they have players who are capable of having big offensive nights. Also, since the Pacers are a good defensive team, playing good defense themselves will be their best bet to beat them.

Rebound - The Pacers are 2nd in the league in rebounding. The Celtics will need to put out extra effort to crash the boards as a team in order to prevent second chance points for the Pacers. The Celtics can't score without the ball and so they need to grab rebounds to give themselves more scoring opportunities.

Push the Pace - The Celtics are most effective when they run and move the ball. They struggle when they slow the pace of the game down. However, when they push the pace they have to focus more to avoid the turnovers that can derail their game.

X-Factors
Injuries
The Pacers have several key injuries and that could make them vulnerable or it could make them more dangerous. It wouldn't be the first time that the Celtics would underestimate a team due to injuries. Also, Avery Bradley, who has been playing very well for the Celtics, is probable and hopefully can play. If not, it may affect the Celtics rotations. 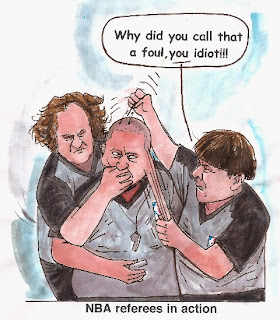 Official Report
Mike Callahan - A veteran of 24 NBA seasons, Mike Callahan has officiated 1,428 regular season, 143 Playoff and 15 NBA Finals games. He was a member of the crews that officiated the 2007 NBA All-Star Game, 1994 Mexico Challenge and the 1996 Schick Rookie Game. Prior to joining the NBA, Callahan spent three years officiating in the CBA, including the 1989 and 1990 CBA Finals. A member of the Cardinal O’Hara High School basketball team for four years, Callahan also coached the freshman basketball team after graduating.

Callahan can be good or he can be very, very bad. He usually lets the teams play and isn't a tyrant with the whistle but still makes some head scratching calls from time to time. The Celtics are 2-8 in their last 10 games with Callahan making the calls. The Pacers are 4-6 in their last 10 with Callahan. His home W/L record this season is 2-2.

Bennie Adams - A former math instructor at Southern University, Bennie Adams joined the NBA officiating staff 20 seasons ago, and since then has officiated 1,110 regular season and nine Playoff games. In addition, he has been a USA Basketball official since 1995. Adams has also officiated the 2008 NBA Europe Live Tour and the
2002 NBA All-Star Rookie Challenge. Adams officiated in the CBA for three years, and worked the 1996 CBA Finals. He also has three years of collegiate officiating experience in the Southeastern, Ohio Valley, Trans America Athletic
and Southwestern Athletic Conferences. Adams also has 10 years of high school officiating experience in Louisiana.
Adams has both a Masters and Bachelors degree in mathematics from Southern University.

Adams tends to be inconsistent especially on charge/block calls. He is on Tommy Heinsohn's naughty list (along with a lot of others). In one game, Tommy went ballistic yelling at the top of his lungs "GO BACK TO YOUR MOMMA BENNIE ADAMS!!!" However, he hasn't been particularly bad in recent games with the Celtics. The Celtics are 6-4 in their last 10 games with Adams while the Pacers are 5-5 in their last 10. His home W/L record this season is 2-2.

Brent Barnaky - Brent Barnaky enters his fifth NBA season having officiated 207 NBA games. Barnaky came to the NBA with 10 years of collegiate officiating experience in the Southeastern Conference, Big East, Conference USA and other college conferences as well. He completed three years of postseason officiating in the NIT (2008-2010). He officiated the 2008, 2009 and 2010 NBA D-League Playoffs, and the 2009 and 2010 NBA D-League Finals.

As with Callahan, he can be good or very bad. The Celtics have had a couple of memorable games with Barnaky in the past. In a loss to the Pistons two seasons ago that Tommy Heinsohn called the worst officiated game all season, Rondo was ejected and the Pistons shot 46 free throws to 15 for the Celtics. In a game vs the Bucks last season, he allowed the Bucks to mug the Celtics all game and called ticky tack fouls on the Celtics but when the Celtics tried to commit an intentional foul to stop the clock, they wouldn't call it. The Celtics are 5-5 in their last 10 games with Barnaky while the Pacers are 7-3 in their last 10. His home W/L record is 3-1.