The Celtics will look for their 4th straight win as they visit the Wizards in the second half of a home and home series.

Share All sharing options for: Celtics go for the home-and-home sweep as they visit the Wizards


The Celtics and Wizards meet for the second time in as many days. In the first game, the Celtics controlled the game from start to finish. The did have their customary 25 point blown lead to allow the Wizards to get to within 1 point in the 4th quarter, but they were able to hang on for a 101-93 win.

Both teams are playing in back to back games and both teams had to travel over night after their last game. The Wizards have the advantage of being at home where they have been playing very will with a 9-2 record at the Verizon Center. As with most young teams, the Celtics have struggled to a 2-4 record on the road.

The Celtics have won 3 in a row for the first time this season and would love to get the 4th straight win. The Wizards, who are legitimate contenders definitely don't want to lose to the Celtics again and will do their best to get this one.

Injuries
Martell Webster (back) out 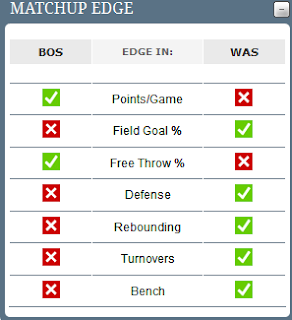 Rajon Rondo vs John Wall
Wall had a solid game in their first meeting putting up 17 points, 8 rebounds, 14 assists, and 3 steals. He did however also have 6 turnovers and more importantly, he played 41 minutes, including the whole second half. Fatigue may become a problem for Wall by the end of the game.

Jeff Green vs Paul Pierce
Pierce played 30 minutes in the loss on Sunday finishing with 16 points, 3 rebounds and 1 assist. He missed a wide open 3 that could have changed the momentum in the game and I'm sure that he will do his best to make up for that and bring his team a win in this one. Green once again will be called on to slow Pierce while also having another big game on the offensive end.

Honorable Mention
Jared Sullinger vs Kris Humphries
These former teammates both played well in the first meeting with Kris Humphries coming out slightly on top with 8 points, 14 rebounds, 1 assist, 1 block and 1 steal to 10 points, 10 rebounds and 2 assists for Sully. Both players will be going at each other to try to get the upper hand in this one.

Keys to the Game
Defense - The Celtics need to especially defend the 3 point line, an area that they have struggled this season. Washington is 4th in the league in 3 point percentage at 37.7%. It was 3 pointers, especially from Rasual Butler who was 6-10 from beyond the arc, that allowed the Wizards to come back from the 25 point deficit. The Celtics must play tough team defense if they hope to get past this team again.

Pace and Space - The Celtics play their best when they move the ball and find the open man. They play their worst when they over dribble and each player tries to do too much. They need to keep the ball moving, including getting up the floor quickly before the defense gets set. With both teams playing in back to back games, conditioning may come into play and the team that can continue to run throughout the game will have the advantage.

Rebound - The Celtics were out-rebounded 52-49 in the first game and they must crash the boards and put out extra effort to grab rebounds to keep the Wizards from getting second chance baskets and fast breaks. The Celtics need to rebound to give themselves extra possessions and their own fast break opportunities.

Be Aggressive - The Celtics were the more aggressive team for most of the game in their first meeting. They backed off a bit in the 4th quarter, allowing the Wizards to make a run. The Celtics must be the more aggressive team in going to the basket, in diving for loose balls, in grabbing rebounds and just in playing harder for 48 minutes. They have to be the team that wants it more and plays harder.

X-Factors
Conditioning and On the Road
Playing in back to back games, conditioning will come into play. The team that still has more left in the tank at the end of this game will get the win. The Wizards have been undefeated in the second of back to back games this season so it will be a challenge for the Celtics to outlast them. The Celtics are a young team and young teams tend to struggle on the road. Hopefully they can summon the focus to pull this one out.

Bill Spooner - Over the past 25 seasons, Bill Spooner has worked 1,365 regular season games and 96 playoff games. In addition to his NBA experience, Spooner has seven years of collegiate officiating experience in the Pac-10, Big West and West Coast Conferences. He also has eight years of high school officiating experience in his home state of California. Spooner was the ref who was caught on tape by a reporter telling Kurt Rambis that he would make up for a bad call he made on his team at the other end. There was some controversy over it and David Stern vowed to investigate it but nothing ever came of it. In his last game with the Celtics against the Cavs, the refs called the game fairly even for 3 quarters and then very one sided for the Cavs in the 4th quarter with the final free throw disparity 37-23 in favor of the Cavs. The Celtics are 0-2 this season and 3-7 in their last 10 games with Spooner while the Wizards are 6-4 in their last 10. His home team W/L record this season is 5-10.

Curtis Blair - Curtis Blair is entering his eigth NBA season having officiated 322 regular season games. Blair has six seasons of NBA D-League experience and worked the 2008 NBA D-League Finals. He also officiated in several college conferences, including the Atlantic 10, Atlantic Coast Conference and the CAA. He was drafted by the Houston Rockets in 1992 and played professionally in Australia, Austria and Turkey. Like most refs, Blair has been good and bad in previous Celtics games. He also called the game against the Clippers mentioned above that got Tommy riled up by the terrible officiating. The Celtics are 1-0 this season and 3-7 in their last 10 games with Blair while the Wizards are 2-8 in their last 10. His home W/L record is 8-8.

Scott Wall - The son of former USA Basketball Director Bill Wall, Scott Wall has officiated 1,039 regular season games and nine playoff games over his 19 NBA seasons. In addition to his NBA experience, Wall has four years of officiating experience for USA Basketball, four years of collegiate officiating experience in the Atlantic Coast, Ohio Valley, and Trans America Athletic Conferences, and five years of high school officiating experience in Kansas and Alabama. Wall was the ref that called the clothesline on Barbosa by Bogans in the Nets game 2 seasons ago just a regular foul. Wall also officiated the Cavs game this season with Spooner where they called it even through 3 quarters and then threw the game to the Cavs in the 4th quarter. Mostly, Wall has been a decent ref, however. The Celtics are 1-1 this season and 2-8 in their last 10 games with Wall while the Wizards are 5-5 in their last 10. His home W/L record is 8-7.