How the Mavericks shred the Celtics pick-and-roll defense

The Mavericks scored 43 points off of the pick-and-roll in the second half against the Celtics. How did they do it?

Share All sharing options for: How the Mavericks shred the Celtics pick-and-roll defense

The first half of Sunday's game between the Boston Celtics and the Dallas Mavericks was a dogfight. Boston trailed 44-38 at halftime, but matched Dallas punch for punch, especially on the defensive end of the floor.

Somehow the Celtics were containing Dirk Nowitzki and the Mavericks' acclaimed shake action, despite their constant struggles defending the pick-and-roll throughout the season.

In the first 24 minutes, Dallas ran 25 pick-and-rolls but scored only 11 points on 3-for-14 shooting. The Celtics were forcing them into low percentage mid-range jumpers by properly defending each screen by the Mavericks.

But the Mavs made adjustments in the second half and downright tore apart the Celtics' pick-and-roll defense.

Dallas started getting the shots that they wanted: a pair of offensive rebounds led to an uncovered Jose Calderon three-pointer, Dirk Nowitzki attempted two shots after a switch onto Rajon Rondo, Calderon missed a wide open three-pointer after Rondo went under a screen, and finally, Samuel Dalembert completed an alley-oop.

After the Dalembert layup, Brad Stevens knew the wheels were about to fall off the wagon, so he called a timeout, even though they only trailed 49-40.

Unfortunately, there was nothing Stevens could do about it since the Mavericks ran 37 pick-and-rolls for 43 points on 17-of-29 shooting. That means 74.1 percent of Dallas' 58 second half points came out of the pick-and-roll.

"The third quarter and the start of the fourth killed us and took us out of the game," said Brad Stevens. "It was really good offense on their part, not great defense on ours by any means. They just picked us apart."

Dallas was abusing Boston by running at least one pick-and-roll nearly every possession, which put a copious amount of pressure on the defense.

"They did a great job moving the ball by reading and reacting. They played very maturely as a basketball team," said Stevens. "Just because of what they're running, which isn't all that unique -- the shake action -- it's still the way that they played and the unselfishness with which they played, are why they're such a good offense."

Coach Stevens is exactly correct when he says that the Mavericks read and reacted to what the Celtics were giving them. In the fourth quarter, Dallas ran three pick-and-rolls out of the same exact set, but scored points differently each time:

The Mavericks run a middle pick-and-roll, which the Celtics defend with a "soft ice." This means that they are allowing the ball-handler space to pull-up and take an inefficient jumper. But it also forces the rest of the team to close in on the paint, which opens up shots outside.

Click the images to see them in full size.

Kelly Olynyk is required to help on the roll man in order to prevent an alley-oop attempt, which hurt the Celtics many times earlier in the game.

The problem with this is that it leaves Dirk Nowitzki, one of the greatest shooters of all-time, about ten feet of breathing room for a shot. He receives the pass and nails it -- no surprise.

Be sure to notice that Vince Carter is wide open in the left corner, because Gerald Wallace also had to help protect the paint. 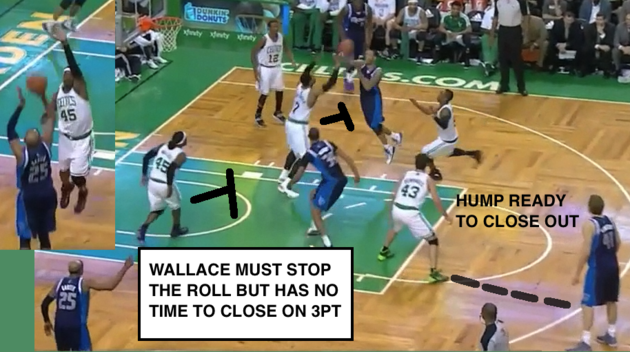 The Mavericks once again run the same action in the second example. This time, Kris Humphries helps, but he stays home to prevent another pass to Nowitzki.

But once again, Wallace needs to stop the roll, so Carter is left wide open in the corner. He nails the shot with plenty of room to spare.

Finally, the Celtics decide to hedge the pick-and-roll instead of playing a soft ice. Jared Sullinger steps out to stop Devin Harris from penetrating the paint, but this still makes both Humphries and Wallace stop the roll.

Harris makes an intelligent play by swinging the ball to Nowitzki, who makes the final pass to Carter for the three-pointer.

This third play was actually defended quite well by the Celtics, but it's the amount of pressure put on the defense that makes it so hard to get stops.

As Brad Stevens explained, "They really put you in a predicament because they set the pick-and-roll, and they get you going in a certain direction. If they put Dirk in the weak side corner, and roll the guy, are you going to leave Dirk, or do you leave the roll? It's a tough spot."

It mostly certainly was a difficult position for the Celtics to be in, and the results showed on Sunday considering the Mavericks shot a ridiculous 58.6 percent out of the pick-and-roll in the second half.

If the Boston Celtics want to make the playoffs, they'll need to defend better than that. Then again, they won't be facing a team with Dirk Nowitzki on it every night either.