Jeff Green and the Celtics shoot down the Bucks, win 102-86

Share All sharing options for: Jeff Green and the Celtics shoot down the Bucks, win 102-86

The Boston Celtics defeated the Milwaukee Bucks, 102-86, and improve to 19-34 on the season. Jeff Green played like a star, scoring 29 points in over 40 minutes of play. Jared Sullinger also had a double double for the sixth game in a row, with 13 points and 10 rebounds.

Milwaukee greeted Boston with blistering cold temperatures, and the Celtics seemingly took that inside the BMO Harris Bradley Center for tonight's game. The C's shot only 39.6 percent in the first half, thanks to a number of lowly shooting performances from Jerryd Bayless (1-for-5), Kelly Olynyk (1-for-5), Jared Sullinger (1-for-6), and Jeff Green (3-for-9). Yet, somehow, the Celtics led 49-46 at halftime -- but that's why the Bucks only had nine wins on the year going into the night.

The Celtics were up 70-68 entering the final frame after playing a much more efficient third period, especially from Green, who scored seven points on 2-of-3 shooting. Green continued to turn up the heat, as the Celtics embarked on a 9-to-1 run to begin the fourth quarter.

And then the Bucks showed why they are the Bucks by turning into a borderline D-League team, as the Celtics built a 17-point lead in the blink of eye. Boston blew Milwaukee out 32-to-18 in the fourth, on their way to their 19th win of the season.

After a sleepy 3-for-9 shooting performance in the first half, Jeff Green turned on his "superstar tease mode" by dominating the Bucks. Green caught fire, drilling jumper after jumper, on his way to 19 second half points, which amounted to 29 for the game. 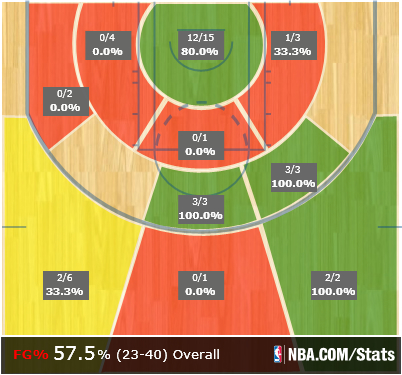 As stated above, the Celtics didn't shoot well at all in the first half, but Green turned things around for them, and truly won them the game. With no go-to player on the roster -- especially with Rajon Rondo having the night off -- the Celtics needed him to step up, so he deserves a lot of credit for doing so when the team needed him to.

Bass gets poked, KO steps up

Brandon Bass had quite a good game, grabbing seven rebounds while scoring 12 points on 5-for-10 shooting, but he got his eye poked in the third quarter. He looked to be in serious pain and was immediately removed from the game. However, he seems to be in good health as he spent the remainder of the night on Boston's bench.

Rookie Kelly Olynyk finally received a chance to play minutes versus starters, and he came up huge, achieving the first double double of his career. In only 21 minutes, Olynyk had 14 points, 10 rebounds, and three assists. He looked confident with his jumper and attacked the rim more than he has at any other point this season. Perhaps it's because he was facing the lowly Bucks, but it's encouraging to see this type of progress no matter the opponent.

Gerald Wallace played 28 minutes and had a quality game, filling up the box score with eight points, four assists, three rebounds, and three steals. It seems like Crash plays better whenever he gets increased minutes, and the numbers support that thought.

On the year, Wallace is averaging 8.5 points, 5.9 rebounds, 4.3 assists, and 2.0 steals when he plays at least 30 minutes. With chunks of mileage on his 31-year-old body, it's unlikely he'd be able to handle that type of workload every night, but it says something that he has produced so well when he receives starter minutes.

His stats don't pop off the box score, but Chris Johnson was very important for the Celtics tonight. It appears that Boston played better anytime Johnson was on the floor, which shows with his "plus 25." He hustles so hard, outperforming his actual skill level. There was one play on defense where he sprinted around every Milwaukee screen, getting to his assignment to contest the shot.  Little plays like that are why he was signed to a contract, and why he might never see a day in the D-League again.

Boston will return to TD Garden to face the San Antonio Spurs for their final game before the All Star Break. The Spurs are currently 37-15, which is the third best record in the NBA.