In only ten games after a nearly year-long recovery from a torn ACL, Rajon Rondo has almost had four triple-doubles already. Seriously, you bet Rondo is a special player. What other athlete could immediately perform so remarkably after coming back from an injury so severe?

There probably isn't one, since most players take months -- sometimes a full year -- to establish the rhythm and comfortability required to compete at a high level in a professional sport.

But Rondo has done the impossible and is almost back to his former self in less than a month after returning to the court.

That's exactly why Danny Ainge's phone is ringing off the hook with inquiries about the four-time All-Star point guard.

MostÂ Boston Celtics fans would like to see Rondo stay in Boston, but just to playÂ devil's advocate, here are some reasons why it might make sense for Ainge to trade Rondo:

1. Rondo isn't the perfect point guard for the motion offense

Brad Stevens has run a motion offense system his entire coaching career, in large part due to the influence of the great Bob Knight, who perfected it during his 40-plus years of coaching. This style of offense stresses constant movement, spacing, the three-point shot, and a large number of screens.

Stevens brought this style to the NBA, which made for an equal opportunity system early in the season. In a sense, any player had the freedom to shoot if they were open, and plays weren't purposely designed to get the ball to one specific player very often.

In the past month, Stevens has revised his offense, designing set plays intended to get the ball to players like Jared Sullinger and Jeff Green. This manipulation has worked to much success, improving the overall efficiency of the offense.

Rondo has averaged over 11 assists per game in each of the past three seasons because of his ability to dominate the dribble, read the play, and find open teammates. One's first thought would be that he's perfect for Stevens' system, but that isn't necessarily the case.

One NBA scout said, "Rondo's style doesn't bode well in a motion offense, where the ball needs to move quickly, hopefully freeing up a player for a high percentage shot."

The scout explained that when The Big 3 surrounded Rondo, the offense could afford to be stagnant due to the type of system Doc Rivers ran, but with Stevens, something will have to change.

After Rondo had his first double-double earlier this season, Stevens was asked about the team's ball movement since he returned. He said, "I think we execute a little crisper. Obviously the ball is in one person's hands a little bit longer, but that's because he's kind of your playmaker and leader, the person that can create for himself and others."

"Rondo's style doesn't bode well in a motion offense, where the ball needs to move quickly, hopefully freeing up a player for a high percentage shot."-An NBA scout

As Stevens said, the ball doesn't move as much, which goes against his philosophy on offense. However, he has never had an elite player like Rondo, which is one reason why the system has somewhat changed since his return.

The NBA scout explained that they're going to have to change even more for each other, "Rondo is a proven superstar, but he came into the league under a very different circumstance with a very different coach."

"Rondo needs to understand this and make sure he is able to adapt to a new style of offense. At the same time, Stevens needs to put his best player in a position to excel and if that means amending the offensive sets to cater Rondo's abilities, then this is what needs to be done."

The San Antonio Spurs have won four titles and have the best winning percentage in the NBA since Gregg Popovich took over and integrated his own version of the motion offense in 1997.

Boston recently faced them, and Stevens praised their style, "[The Spurs play] some of the most inspiring basketball I've ever watched. They're one of the very few elite teams in the league.

"They move the ball, they move bodies, they know their system inside and out, they can plug people into spots and on any given night that person can have 20 or 25 points. They have a tremendous system, and I have nothing but the utmost respect for them because they're basketball in the purest form."

Rondo vs. Parker Spot-Up Attempts Since 2009

What the Spurs do offensively is essentially what Stevens wants to accomplish with the Celtics. The scout then discussed Tony Parker's usage with San Antonio and their version of the motion offense.

Basically, Parker's ability to score the ball from the outside, especially on spot-up attempts, is what sets him apart in this type of system. Rondo might be better attacking the basket, but his troubles at the free throw line deter his effectiveness.

The motion offense requires spacing, and Rondo hasn't proven that he can consistently hit the three-pointer just yet. More frequent movement of the ball is also essential, which is something Rondo will need to adjust to.

Rajon Rondo can fit into any offense since he is an elite player, but he won't be the perfect fit unless his ability to hit the three-pointer improves to at least a threatening level, much like Tony Parker.

It's reasonable to assume that Rajon Rondo will sign a maximum contract when he enters free agency in 2015. Chris Paul, John Wall, and Deron Williams all signed max contracts, so it makes a lot of sense that Rondo will get one.

Sure, holding up the Larry O'Brien Championship Trophy at the end of the season isn't the be-all and end-all for players, but it does give some credibility to the thought that star point guards aren't the key ingredient for winning a title.

Teams have won the Finals with game-manager point guards more often than not, just as long as they have a star at other positions. Jason Williams, Derek Fisher, Mario Chalmers, Kenny Smith, and Dennis Johnson are just a few names that pop off the page when reviewing recent champions; even Rondo himself wasn't a star when the Celtics won in 2008.

Rajon Rondo is a superstar at the point guard position, but history tells us that they aren't a necessity for a championship; elite wings or bigs are, not point guards.

There's no denying that Rajon Rondo is an elite player, but he won't be the point guard of the Celtics forever. Whether his tenure in Boston ends in 2014 or 2024, it will come to an end at some point. 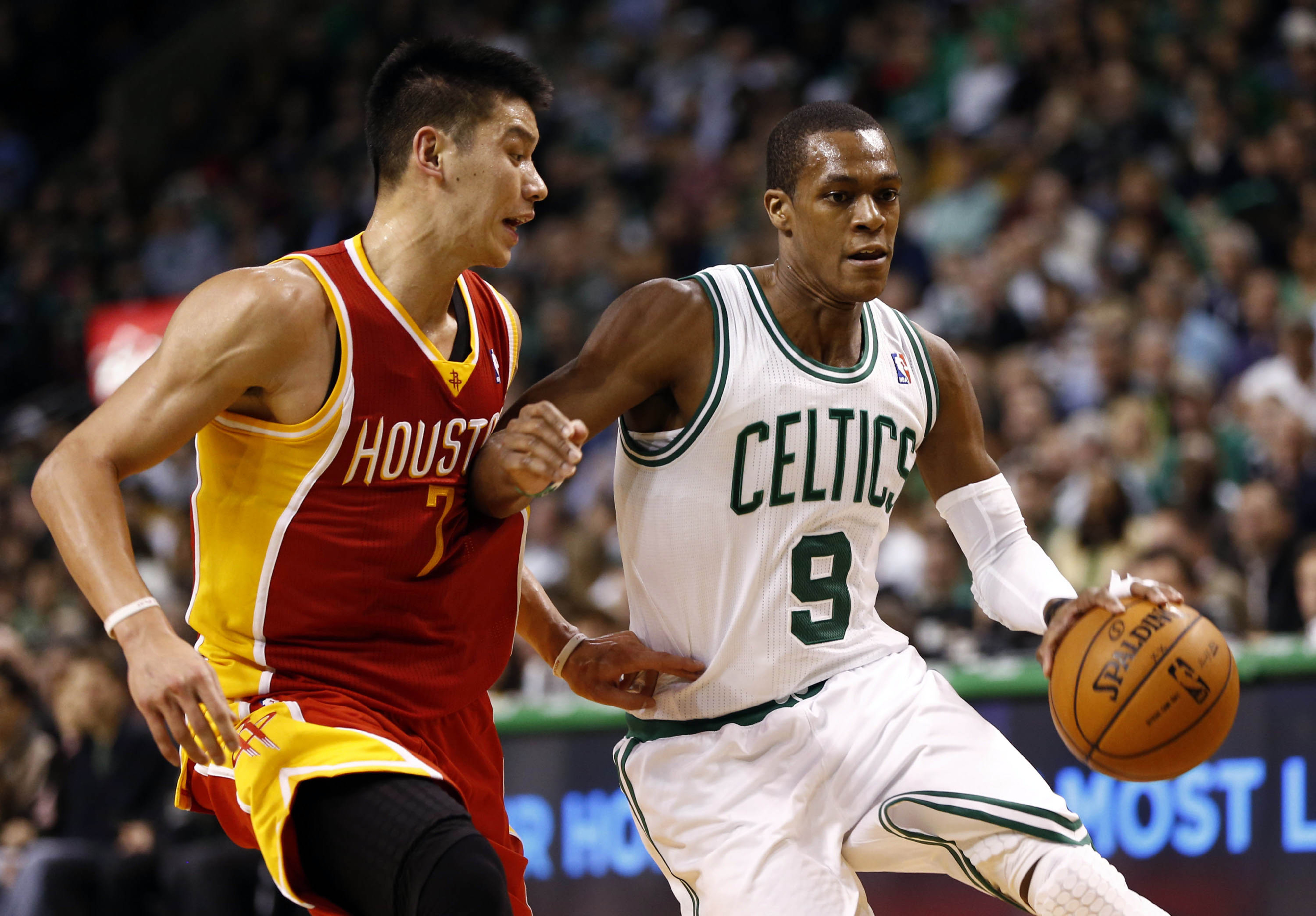 None of those aforementioned players will require maximum contracts, but they are all very good starting point guards, who could conceivably play a role on a contending team. A few of them also fit with the Celtics because they hit the three-pointer at a high rate, in addition to their quality distributing skills.

There are other point guards that could fit well in Boston, and they could come from this year's draft. There are plenty of top-end options like Dante Exum, Tyler Ennis, and Marcus Smart, or middle-round players such as Jordan Clarkson and Zach LaVine.

These players deserved to be acknowledged because it's worth understanding that other options exist, since Rajon Rondo isn't the only potential starting point guard for the C's.

4. Rondo and the Celtics might not want each other

Put aside your own personal views for a moment and think about this from Boston's perspective. If there is any doubt in their mind that Rajon Rondo is the point guard of the future, then 2014 is the year to maximize their return in any trade.

Rondo turns 28-years-old on Saturday and is currently in the prime of his career. If anything, the best has yet to come since he is in the process of improving his jumper.

Rondo just returned from knee surgery but he is recovering far ahead of schedule and could be back to full strength by the playoffs. Teams can see that, which is why offers are supposedly flying in.

This will continue on through the offseason, when his value will likely reach its peak during the draft and free agency. However, there will be fewer teams in the market for a point guard at this time, which could drop Rondo's worth in the eyes of other organizations.

Once the season begins, Rondo's value probably plummets. A player of his caliber won't be traded early in the season, so it would have to happen near the deadline.

If Boston was hypothetically looking to deal Rondo, or he didn't want to sign with them, any inquiries for him would come with a lowball trade offer. Other teams would know he's an upcoming free agent, so his value wouldn't be where it is during the 2014 deadline.

In 2015, it's very unlikely that the C's would get the type of value they can get this season or this offseason. If a deal wasn't reached, just imagine if Rondo walked away in free agency for nothing because Boston was afraid to pull the trigger on a trade.

That should be a pretty grim thought for Boston Celtics fans.