Are the Boston Celtics in a no-lose situation?

The young players are blossoming and progress is being made each game, so are the Boston Celtics in a no-lose situation this season? Not exactly.

Share All sharing options for: Are the Boston Celtics in a no-lose situation?

Just admit it, the Celtics win when they lose. The paramount goal this season is for individual players to progress, and Boston is accomplishing that no matter what happens. But winning too many games lessens their chances of acquiring a franchise-changing player in the 2014 NBA draft, which could extend their rebuild for years.

At this point, the Boston Celtics have only won 34.5 percent of their games, but they have made progress in almost all of them. That's a victory for the Celtics -- the only type of "win" that matters this year -- and the organization knows it.

The evolution towards developing a winning culture should have nothing to do with the numbers in the win-loss column. Ainge has constantly talked about how this year is about progression, and it's clear that Brad Stevens understands that too, since his players have received the message.

Amidst a nine game losing streak in January, Jared Sullinger said that the team was fostering a winning culture despite all of the losses. "Honestly, going on this losing streak, we could've crumbled. You see teams crumble and you see teams go out there and go for themselves," said Sullinger.

"But as you look more and more into this team, you see guys are fighting, playing hard, and being very unselfish. That is a sign of great guys in the locker room, but also a sign that we have a great coach that is constantly coaching us instead of just giving up."

Boston has won only six out of 16 games since Sullinger said those words, but he still retains that positive perspective. Over All-Star break, he said, "We all want to win. But we all know that this is a process. And [Stevens has] done a good job of not letting us forget that this is a process and sometimes you can make progress and get better and not always get the win."

Jared Sullinger and Kelly Olynyk are blossoming, and other young players are getting better too. Phil Pressey seems to be finding his role, and Chris Johnson has come out of nowhere. Avery Bradley's mid-range game is coming along, and Vitor Faverani has shown the tools of a quality stretch center.

All of these advancements have nothing to do with winning or losing games. Like Sullinger alluded to, improvements can occur no matter what the final result is.

But the 'W' or 'L' at the end of a game does influence the future of the Boston Celtics -- quite a lot, actually.

Before the season, an anonymous general manager told ESPN.com that his organization understood the value of losing because "being in the middle" is truly the worst-case scenario.

The art of the tank - Jeff Goodman - ESPN
"Sometimes my job is to understand the value of losing. I know that sounds crazy, but if you're an NBA general manager like me, the last place you want to be is in the middle. There are only two outcomes there: Either make the playoffs and be first-round fodder for one of the premier teams or miss the playoffs and pick somewhere around 11th to 14th in the draft. Either way, the odds are that you stay in that middle range. It's a recipe for disaster."

It doesn't matter if Danny Ainge is that anonymous general manager or not, because it's a perspective that all of them probably share.

The NBA changes in the postseason, transitioning from an up-and-down game into a slower, grittier half court battle, which makes for a much different experience. So, it could be argued that making the playoffs and getting bounced in four or five games would still be a valuable experience for the young players, and even for Brad Stevens.

But can the Celtics even make the playoffs? They're currently 19-36 and six games behind the Bobcats, who hold the eighth and final seed. But with three other teams ahead of them in the standings (Detroit, New York, Cleveland), it will be even more difficult to climb the ladder.

With only 27 games remaining, the Celtics could conceivably go 14-13 (finishing with 33 wins) and they'd still most likely miss the playoffs. Matter of fact, they could win about 36 or 37 games, and it'd still be a toss up if they got in or not.

But with 19 more games against teams that currently hold a playoff seed, it's doubtful Boston reaches the postseason -- at the most, they'll probably miss the playoffs by a few games, meaning they would be stuck in the dreaded "middle."

Some will argue and say, "So what? Competition is healthy. There are no guarantees at the top of the draft. The Celtics could just as easily get a stud player in the middle of the round."

That's true. But it's not about what will happen, because nobody knows, it's only about what could happen. In other words, what draft positioning gives the Celtics the greatest chance of selecting a franchise-changing player?

The answer is obvious. 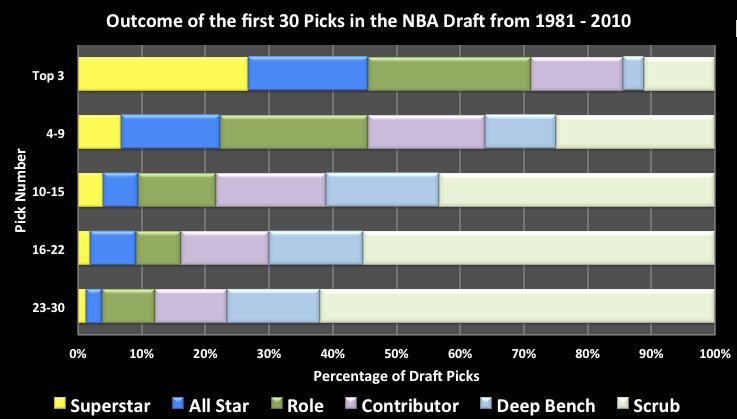 Hover your mouse over the "dots" of each bar on the graph for examples of players that have been drafted at each spot.

If the graph is difficult to understand, here's what you really need to know, according to my subjective ratings of each draft class from 1981 through 2010:

In other words, the Boston Celtics have a better chance of drafting the next Paul Pierce at third overall than they do at 10th -- which is the spot Pierce was drafted in 1998.

Of course, looking at the historical trends of drafts has no influence on any drafts in the future. It does, however, give us a reference of what a team can expect depending on their draft positioning.

Maybe Duke forward Jabari Parker is the next superstar in the NBA; he'll be drafted in the top three. Or maybe it's NC State's T.J. Warren, who might not even crack the lottery. No one knows, but there is definitely a better chance that Parker becomes a star considering the evidence history provides.

Not to mention the value of trading one of these draft picks. If, by chance, Danny Ainge plans to package his first rounders for a proven superstar player -- just like he did in 2007 -- having the fifth or sixth pick gives him a lot more ammo than something like number 10 or 11.

As the anonymous general manager said, "the last place you want to be is in the middle," which is precisely why it's beneficial for the Celtics to make progress while losing games. With Brad Stevens at the helm, there is no doubt that the same amount of growth will occur whether they win or lose anyway. Isn't that what has happened so far this season?

"...This is a process and sometimes you can make progress and get better and not always get the win." - Jared Sullinger

Right now the C's are four games removed from the second worst record in the league, but they're also just five games back from the 12th worst record, the dreaded middle.

Traditionalists have claimed that no true fan roots against their own team, but that isn't what's happening at all. No one is rooting for a loss; they're just rooting for what puts the Celtics in the best position to win a championship as soon as possible.

In fact, it doesn't really matter what anyone is rooting for; that's not what this is about. What matters is Boston's ability to build a team talented enough to win Banner 18. The NBA's long history of drafts and trades tells us that the higher a pick is, the greater chance a successful acquisition is made. That's the important thing, not a fan's individual rooting interests.

It's not a fun thought to swallow -- you might even be choking on it -- but consider the implications of what a mere difference of four or five wins could mean for the Boston Celtics. Having the number three pick, with only 26 wins, could give the Celtics a reasonable chance at an elite player, but just 31 wins could grant them the ninth pick, and a much slimmer chance at a star. That could be the difference between the Celtics being contenders in 2015, 2020, or even 2025.

If anyone tells you that they're "rooting for a loss," understand that they're actually hoping for wins, just in an odd and twisted way.