Can't buy me Love? - I'd rather see the Celtics as buyers for Kevin Love

The Celtics would love to add Love, but will the Timberwolves be willing to sell?

Share All sharing options for: Can't buy me Love? - I'd rather see the Celtics as buyers for Kevin Love

There's been a lot of chatter around Rajon Rondo at this trade deadline.  By now you know the drill.  Danny Ainge will listen to any offers but the price is very high.  The Celtics have the leverage of having no urgency.  If Ainge doesn't get what he wants, he can always wait till the summer when more teams might be willing to bid on Rondo (and we'd know where everyone's draft picks are slotted).  Or even better, he can simply hold onto Rondo and continue building a team with him being a foundation building block.

The Timberwolves are in a similar position, except that their GM hasn't shown any (public) willingness to discuss trading Kevin Love.  Yet in a year where the Wolves were supposed to be at least in the mix out West, they are looking at another trip to the Lottery in May.  Kevin Love can opt out of his contract in 2015 and there's at least a growing perception that he's as good as gone when that happens. (Zach Lowe covered this in his Bill Simmons podcast appearance and apparently will be writing about them soon - so stay tuned for that)

Putting aside conflicting rumors and gossip if (and that's a big if) the Wolves decided to explore trading Love, they could have their pick of teams interested in his services.  One of the teams with a lot of assets to offer is our own Boston Celtics. 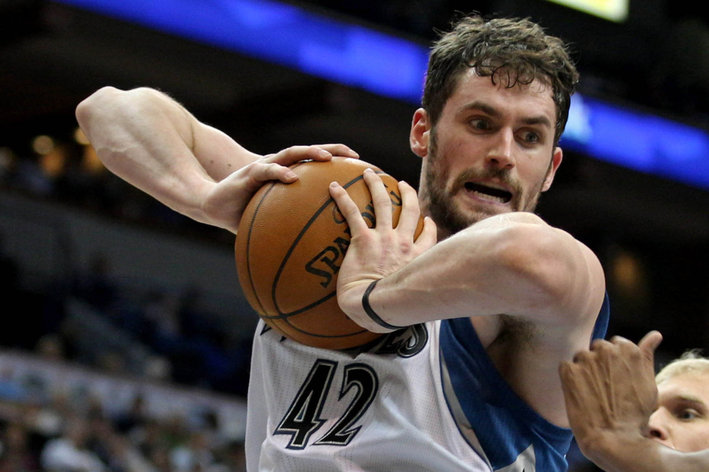 Minnesota doesn't need to trade Kevin Love. But if things don't change, that might change in a year.

We've got draft picks galore, expiring contracts to match his salary (and even take on other contracts if necessary), and young talent.  Someone like Jared Sullinger would be a logical type piece (similar to Al Jefferson in 2007).  Wyc even indicated recently that he'd be willing to go into the tax for the right kind of buy-now deal.

Of course we've been down this road with the Twolves before and it didn't work out so we for them.  They might be a bit gun-shy doing it again.  After all, there are other groups out there with picks and cap space (76ers, Suns, etc.) that would be in the bidding as well.  Still, at the end of the day, if they feared losing Love for nothing, they'd have to independently review all the options and pick the one that made the most sense to them long term.

Still, with the Timberwolves as with the Celtics, the chances of something hugely complex like this happening in the waning hours of the trade deadline are between slim and none.  But it is something to keep an eye on as the summer kicks off in June and July.