The Boston Celtics have now lost five games in a row after falling to the Utah Jazz, 110-98. Kelly Olynyk only played 28 minutes, but was easily Boston's greatest player. He had 21 points, eight rebounds, four assists, and one steal on the night. 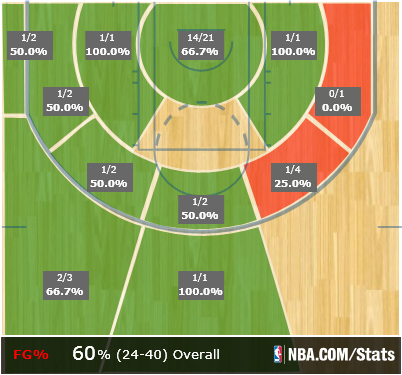 The first half was hideous for Boston, as they trailed 59-46 during the break. Utah shot 60 percent and attempted 21 shots near the rim thanks to some feeble and taciturn defense by the Celtics. The Jazz also grabbed five easy offensive rebounds, displaying the willingness to attack the rim, which the C's lacked.

On the offensive end, Boston had two possessions that explained the half in a microcosm: Halfway through the second period, the Celts were unable to score despite having four shots on one possession. Rajon Rondo missed three times, and Brandon Bass did once. Ouch. Right before the end of the half, the Celtics called an after timeout play, but the normally reliable Rondo was unable to inbound the ball and earned a rare five second violation.

Was the third quarter less ugly for the Celtics? In a word: No. The Celtics' disinterest in playing defense continued as the Jazz extended their lead all the way up to 18 with 8:29 left in the game.

But that's when a timeout was called and the C's started to play more efficiently. Thanks to Kelly Olynyk, who was a star tonight, Boston responded with an 8-to-0 run in only one minute to cut the deficit to ten. Unfortunately, they wouldn't get much closer. Anytime the Celtics scored, the Jazz responded with plays of their own. Utah held a steady lead before winning the game, 110-98. Boston now drops to 19-39 on the season. They are five games back from the worst record in the league and 8.5 back from a playoff seed.

Kelly Olynyk ran into foul trouble early in the game -- he had three at halftime -- but he was highly productive, scoring 21 points on 8-of-13 shooting, with eight rebounds, four assists, and one steal. To get an idea of KO's impact, his first possession of the game included a steal, an offensive rebound, and a layup. Olynyk is a difference-maker whenever he's on the court, which partially explained his plus-3 in the first half even though the Celtics trailed by 13.

Olynyk also played a large role in Boston's fourth quarter comeback. Coach Brad Stevens stayed with the hot man, and KO took advantage of the opportunity. He played quality defense, rebounded the ball well, was the engine that made the Celtics offense go late in the game.

This is precisely why he needs to play despite the foul trouble. Even if KO manages to average six fouls in less than 30 minutes per game, he still needs to play and fight through it -- especially when Brandon Bass and Kris Humphries are struggling. (About those guys, they combined for 17 points on 6-of-21 shooting tonight.)

Danny Ainge claims that Kelly Olynyk can learn from watching the way Bass and Humphries work on and off the court, which is true, but Olynyk's confidence is soaring and he'll more quickly reach his potential if he's able to actually play respectable minutes like he did tonight.

Favors does the C's a favor

If there was any doubt that the Celtics need an interior presence, tonight's game should be evidence enough that they do. Sure, Jared Sullinger was out for his second-straight game with a concussion, but each Utah big man was able to do what they wanted, and their wings and guards drove to the basket at will.

Derrick Favors dominated, scoring 20 points on a highly efficient 8-for-9 shooting -- he probably would've scored much more points if it weren't for his minutes being limited. Enes Kanter also snatched four offensive rebounds, only because of his sheer size. Collectively, Utah attempted 34 shots at the rim, and hit 70.6 percent of them. That type of number doesn't bode for too many wins.

Sullinger would've helped, but this offseason the Celtics need to find a rebounding big who can also effectively defend the paint, especially against the pick-and-roll.

The Celtics will begin their five-game home stand on Wednesday against the Atlanta Hawks, who will be playing their second game of a back-to-back.