There is reason for cautious optimism regarding the strides Rondo has made in improving his jump shot in recent seasons.

Share All sharing options for: Has Rajon Rondo improved his jump shot?

Now that the trade deadline has passed, and those pesky rumors involving Rajon Rondo can finally be put to bed (well, at least until the summer), we can start examining Rondo’s game and just how he has looked since returning from injury. It hasn’t all gone smoothly for Rondo. He is starting to play more and more minutes, yet the Celtics are still sitting him for the occasional game as they did against the Kings last Saturday.

Even beyond his inconsistent minutes, though, Rondo is still shaking off the rust after being out for nearly a year. He is shooting just 39% from the floor since his return (which would be the lowest single-season total of his career), and the Celtics offense is still performing better with him on the bench than on the court.

Most notably, Rondo is struggling to score when driving to the hoop, which has been a strength of his in years past. According to NBA.com, the point guard is shooting just 34.8% on drives this season as he works to fully regain his quickness, explosion, and confidence. Some of this is likely a result of Rondo’s supporting cast as well; the lack of any impact perimeter scorers on the Celtics roster allows opposing defenses to focus on Rondo more than they could in the past.

But beyond the rust and inconsistency that Rondo has shown, one facet of his game has proven to be a pleasant surprise since his return in January. The 28-year-old’s jump shot, long his biggest weakness, has looked much improved so far this season.

While he has only played in 13 games (meaning many of his stats should be taken with a grain of salt), Rondo’s increased willingness to shoot more three-pointers is an encouraging sign. Thus far in 2014, he has taken 2.6 three-pointers per game and has nearly equaled the amount of three-point attempts he took back in 2011-12 despite playing in 40 less games.

Even more reassuring is that Rondo is actually making a fair share of his threes as well. The eight-year veteran is shooting 35.3% from behind the arc, which is roughly even with the league average mark of 35.8%.

So Rondo is both taking and making more threes, and he has also shown improvement on his pull-up jumpers. Per NBA.com, Rondo is averaging just over four points per game on pull-up shots, while shooting 42% on such takes. These results could be crucial for Rondo’s growth in the half court offense, allowing him to better succeed in pick-and-roll opportunities. In years past, teams have simply gone under the screen when defending Rondo, both daring him to shoot and clogging up the paint to prevent him from driving.

In many ways, Rondo’s performance from behind the three-point line and on pull-up jumpers is a continuation of the improvements he had begun making in years past. As Grantland’s Kirk Goldsberry wrote back in January, Rondo had already become an effective mid-range shooter, especially from the elbow areas:

Rondo was actually one of the best elbow shooters in the league last season. Out of 141 NBA players who attempted at least 100 shots from the elbows, Rondo ranked fourth in field goal percentage in that zone—trailing only Jason Smith, Steve Nash, and Jose Calderon. Those are pretty good numbers for a guy who can't shoot. Per Synergy Sports, he also earned a "very good" rating for shots off the dribble, and an "excellent" rating for long 2-point jumpers.

Rondo’s shot chart so far this season shows continued reason for optimism. The Celtics point guard is not only shooting more often, but is also beginning to make defenses pay when they leave him open near the perimeter: 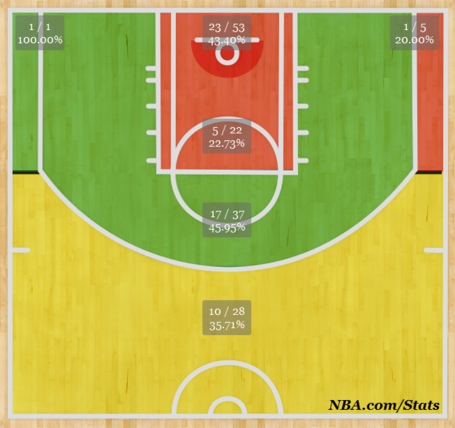 Although 13 games of solid shooting are not nearly enough to declare Rondo a consistent jump-shooting threat, his performances are trending in the right direction. Even prior to his ACL injury, Rondo had made significant improvements on his mid-range shot, and that progress has only continued further out to the three-point line.

All of this is part of the greater offensive burden Rondo will have to carry as a leader both on and off the court for a Celtics franchise that hopes to rebuild around him. Adding at least a league-average jumper will go a long way in helping to enhance and round out Rondo’s offensive game. With the Celtics’ gaze focused very much on the future, Rondo has 24 stress-free games left to continue honing his jump shot, working off the rust, and adding to his offensive repertoire.

For the time being, taking more jump shots is a good thing for both Rondo and the Celtics.

Alex Skillin is a regular contributor to CelticsBlog. He writes, mostly about baseball and basketball, at a few other places across the Internet. You can follow him on Twitter at @AlexSkillin.