In the third part of the Boston Celtics pick and roll defense series, their "hedging" and "switching" defense is analyzed using a combination of film study and analytics.

In the second part of the series, we analyzed the Boston Celtics' usage of "ice" when defending the pick and roll. They weren't very effective icing during their 11 games in February, but they did have success using two other techniques called "hedge" and "switch."

How do the Boston Celtics defend the pick and roll? Here, a new way of assessing defense with statistics is introduced, and the Celtics' production defending the pick and roll in February is briefly analyzed.

In the second part of the Boston Celtics pick and roll defense series, their prominent technique of "ice" is analyzed using a combination of film study and advanced statistics.

The Celtics use them only sparingly, but they are still valuable in certain situations. A switch is exactly what it sounds like. If a pick and roll occurs, the two defenders simply switch off their assignments.

Hedging gets more complicated, and there are different variants of it (blitzing), but to put it simply, the big man defender must come out towards the ball handler, and force his dribble back towards the half court. The guard or wing being screened must fight over or under the screen to get back to his man. These two actions automatically force the rest of the defense to rotate.

Out of 441 pick and rolls run against the Celtics in 11 games this past month, the Celtics iced 325 times, or 73.7 percent. That was clearly their prominent technique used, but they did choose to hedge and switch on various occasions.

The Boston Celtics were very effective when switching on the pick and roll during the month of February. At 36.3 percent, opponents shot well below the league's average field goal percentage, which suggests that the Celtics were consistently forcing teams into undesirable attempts.

With a PPP of 0.87 and P4 of 0.61, opponents clearly struggled scoring the ball. Boston was able to elicit a turnover or reset nearly 30 percent of the time, which is a respectable rate.

However, the Celtics typically choose to switch on only three occasions:

Boston switches most of the time whenever their small forwards, Jeff Green and Gerald Wallace, are put into a pick and roll. During the month of February, Green switched 62.7 percent (32-of-51) of the time and Wallace did 40 percent (16-of-40). Their mix of size and speed allows the Celtics loads of flexibility when defending certain teams.

Switching late in the shot clock is something almost every single NBA team does, and the Celtics do it very effectively most of the time. 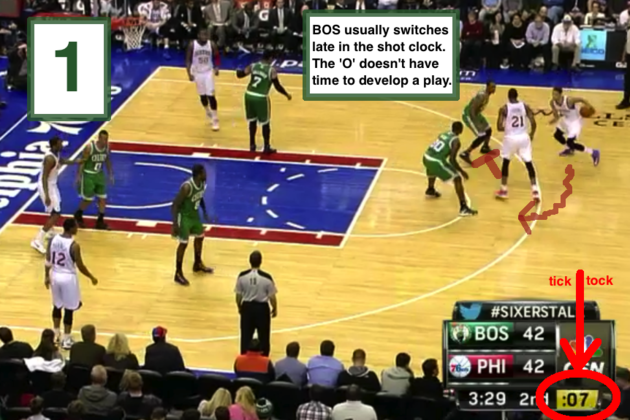 In the play above, Michael Carter-Williams and Thaddeus Young run a pick and roll against the Celtics. With only 7 seconds left on the clock, Rajon Rondo and Brandon Bass decide to switch. On the backend of the play, virtually nothing is happening. In fact, this entire possession was stagnant. 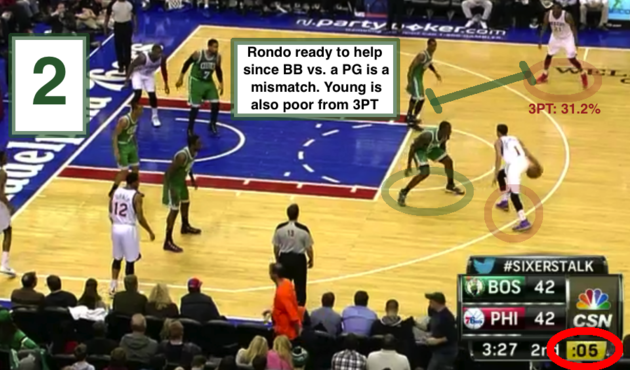 Everyone on the court seems to be watching the ball, as Bass is isolated with MCW. But look closely at Rondo, who has already pre-helped on a potential drive to the rim. It's no problem giving Young space for a shot, since he is not a very effective three-point shooter. 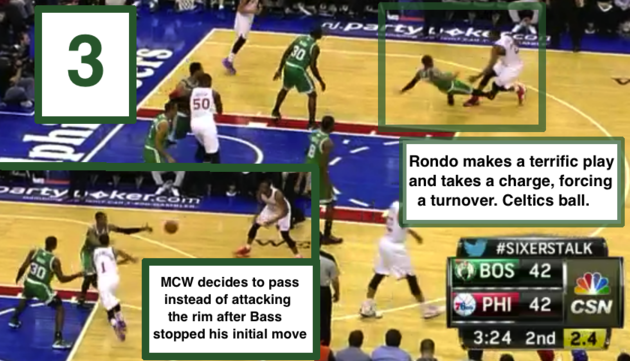 On the bottom corner image, Carter-Williams makes the right choice and passes the ball. Bass moves his feet well and stops his move, but the help defense was also there to prevent deeper penetration.

Rondo quickly closes out and doesn't allow Young to take an uncontested three, so he pump-fakes. But since Rondo is (occasionally) an elite defender, he makes an amazing play and takes a charge. But the best thing to come from that play is this gif:

The other situations when switching occurs are fairly related, since many times Brad Stevens will prepare the Celtics to switch at a high rate against certain teams. This happened most recently against the Hawks, who have been bombarded with injuries just like the C's. Since both teams played small, Boston ended up switching on 41 percent of the pick and rolls attempted. 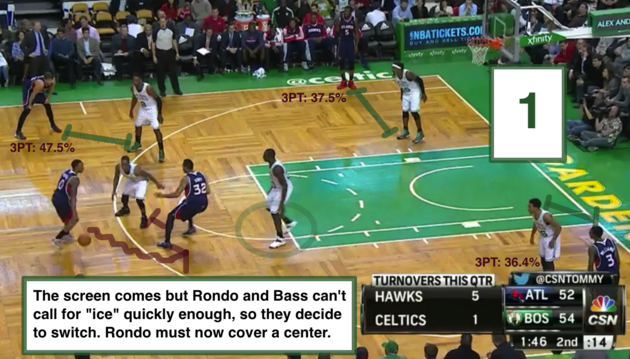 Atlanta calls for a pick and roll, probably hoping to draw help defense from the perimeter, but Boston correctly makes the switch. Even though icing would be the optimal option here, Jeff Teague was already going to his strong side, so the switch was the preferred move. Unfortunately, this would result with Rajon Rondo defending a center, which is a huge mismatch. 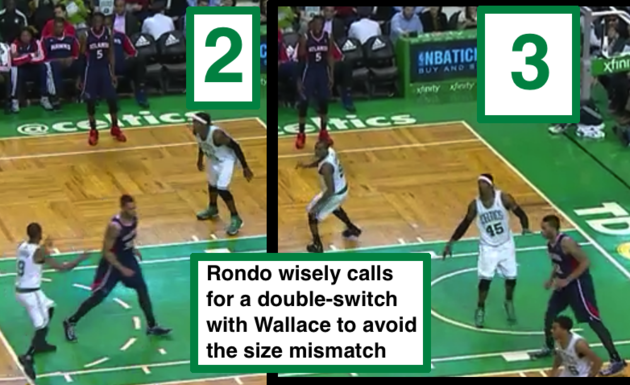 But Rondo is one of the smartest players in the NBA and in only a fraction of a second, he calls for a switch with Gerald Wallace. The two trade off on their assignments, which eliminates any significant mismatches on the play. Bass covering a speedy point guard isn't an ideal matchup, but he is Boston's greatest big perimeter defender

Bass puts Teague on lockdown, sticking with him on every shimmy to the rim, and he ends up getting a finger on the ball to cause a missed shot. None of his teammates even need to help on the play, which shows Bass' proficiency as an individual pick and roll defender.

Boston hedges on pick and rolls 7 percent of the time, and the numbers look pretty good in those situations. Opponents shoot only 37.5 percent, and they have a P4 0f only 0.68. But it's not about the result with hedging, because everything leading up to the end of the play puts significant pressure on the defense.

That's why less and less teams are hedging on pick and rolls in the modern NBA. With the evolution of shooting big men, teams are able to stretch the floor with their off-ball players, which strains the defense when they must rotate.

On the first image, the Kings run a side pick and roll and Boston decides to hedge with Gerald Wallace and Phil Pressey does what he can to fight through the screen. Notice how wide open DeMarcus Cousins is for the Kings, since Jared Sullinger must rotate down to prevent the roll from the man setting the screen.

Next, the ball-handler makes the pass towards the rolling big man. Sullinger must come all the way over to pick him up, but now Brandon Bass has the responsibility of picking up Cousins, who has almost the entire paint to work with at the moment.

In the next sequence, the pass is already making its way to Cousins, who is cutting to the rim. Bass sees the ball coming and begins to step up, as Green gets in front of Bass' former assignment.

Behind the play, Wallace must hustle over to the corner to cover the open three-point shooter. Cousins gets rid of the ball like it's a hot potato, and Wallace is only halfway there. 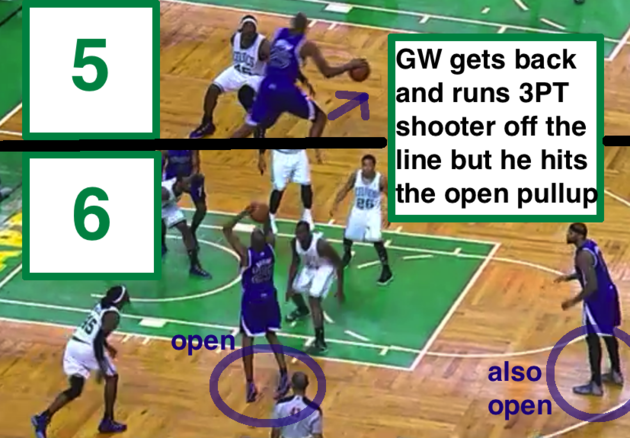 Wallace gets there, but not in time, since his momentum doesn't allow him to properly guard Travis Outlaw. He takes one dribble forward for the simple pull-up jump shot. Even if Outlaw was covered, Cousins was open at the top of the key since Bass had to return to protect the paint.

On this play, the Celtics only allowed 2 points, but it's a good example of why the Celtics don't hedge very often. Even if some of the concepts are pretty hard to understand, the wordiness of trying to describe the defense is an indication of how much is actually going on during the play.

This madness is precisely why most teams are using "ice." It's easier, and arguably more effective, even though the statistics didn't look that way for the Celtics in February.

The next part of the series will take a look at how the Boston Celtics overall defense performs when individual players are the pick and roll.