The value of a three-point shooting Jared Sullinger

Jared Sullinger is only 25.6 percent from three-point range this season, but he should continue to shoot in order to reach his potential.

Share All sharing options for: The value of a three-point shooting Jared Sullinger

If the Boston Celtics want Jared Sullinger to maximize his potential, they'll force him to keep taking shots from three-point range. He's shooting only 25.6 percent on the year, and even Brad Stevens realizes that it's not a quality attempt; but in a season about progress, it's important for Sullinger to keep taking steps forward.

The second-year big man has said that he prefers playing inside, which is good news since most three-point shooting bigs don't have that desire or ability. Those players are typically specialists, like Ryan Anderson or Channing Frye.

Incredibly, only five big men in the NBA attempt at least 6.0 shots within eight feet of the rim and 2.5 shots per game from three-point range.

Those five players are Kevin Love, Thaddeus Young, Josh Smith, Paul Millsap, and Jared Sullinger. Already, Sullinger is a rare breed in the ever-changing NBA, displaying the ability to play both inside and outside.

But Sullinger isn't much of a threat right now, and defenses often leave him open if he's standing behind the arc. At 25.6 percent, chucking up three-pointers might not help the team win games this year, but it will lead to great success in the future.

Stevens might joke that this makes him less of an "analytics guy," but this choice is precisely why people call him that.

The mid-range jumper is dying in the NBA. Teams are taking less mid-range shots and they're instead choosing to step back a take a three. Virtually every study conducted comes to the conclusion that the mid-range jump shots aren't quality attempts because threes yield more points per shot. 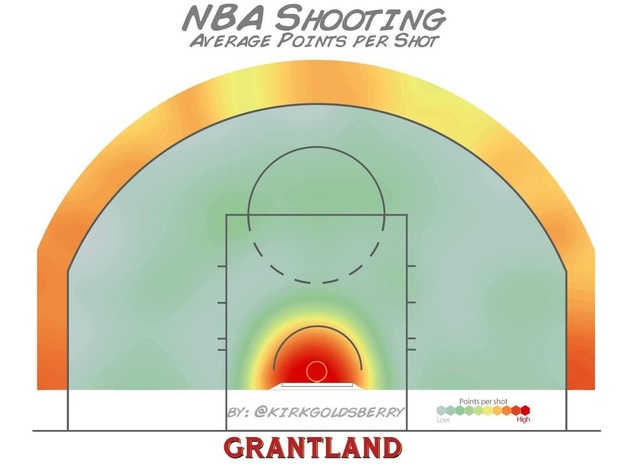 The graph above essentially details the "hot zones" on the court, which are three-pointers and shots within the restricted area. Basically, the "hotter" areas of the court mean it has a better points per shot average.

On the year, Sullinger is a 45.3 percent shooter from 16-24 feet on the court. This means that he's averaging an average 0.91 points per shot. From three-point range, Sully is only 25.6 percent, which is a below average 0.77 points per shot.

But consider this: If Sullinger someday becomes a 35 percent three-point shooter, which is a realistic goal, he would score 1.05 points per shot. Even at a subpar 30.3 percent, he'd have the same exact points per shot of 0.91.

Basic math tells us that the former is worth 0.9 points per shot, whereas the latter is 1.05 points per shot. The two-pointer has a better chance of going in, but the end result yields fewer points, which is all that matters.

If Brad Stevens wasn't a numbers guy, he'd stress that Sullinger continue to take the shot he's best at, mid-range jumpers, but he's instead suggesting that he step out behind the three-point line. Right now, the results might not be there, but in the upcoming years, they will be if all goes according to plan.

Putting aside the statistics, having a big that can shoot three-pointers makes a huge difference on the court. If Sullinger becomes a perimeter threat, it'll force the opponent to make significant changes defensively.

That's exactly what happened on Wednesday night, when Sullinger caught fire and went from 4-for-6 from three against the Raptors.

"4-for-6 gave us a chance to win," explained coach Stevens. "It's not easy to score inside against [Jonas] Valanciunas and [Amir] Johnson with their length, so it makes sense to stretch him. They ended up not playing Valanciunas much late as a result of that I'm sure."

Sullinger's ability to shoot forced the Raptors to take their best big man off the court because of his inability to defend on the perimeter. This opened up more space for the Celtics to score in the paint, which helped the team as a whole.

If a big is simply a threat from three-point range, the floor is wide open for the rest of the team. Cutting and passing lanes open up, isolation scorers are allowed more freedom to play one-on-one, and defenders must help more on drives to the rim.

When defending the pick-and-roll, most defenses choose to play "ice," which is meant to force bigs into taking the least appealing shot on the court, mid-range jumpers. This is generally an effective strategy, since preventing teams from scoring at the rim is necessary for winning games, but it becomes a problem if the screening big man can shoot the three.

Jared Sullinger is struggling from three this season, but his issues are more confined than one might believe. On the year, Sullinger is actually shooting a terrific 37.5 percent (21-of-56) from three out of the pick-and-pop. By comparison, he's only 41.8 percent (33-of-79) when he pops for a two, or rolls to the rim.

So, on the pick-and-roll, Sullinger scores 1.13 points per shot from three compared to only 0.84 from two. There is no question that attempting a three leads to more points, and therefore a higher chance of victory, which is why it's so important for him to keep shooting.

This offseason it'll be important for Sullinger to improve on these specific situations. It's impossible to know for sure, but it's likely that he isn't able to get the same rhythm in his shot when spotting up. He isn't moving, like he is when coming off the pick-and-pop, so he isn't able to get his legs underneath the shot.

"I believe in myself. I don't really care what the nay-slayers say," said Jared Sullinger. "Some of y'all are out here right now. I could care less. I'm just trying to expand my game, and if I'm open I'm going to shoot it."

Coach Brad Stevens might not admit it, but he knows a three-point shooting Jared Sullinger has much more value than the player we're watching this season. If the Boston Celtics want to compete next season, it's crucial that Sullinger achieves his goals this summer and becomes the player that he and the organization want him to be.