CelticsBlog high five with Steve Bulpett of the Boston Herald

"The only true currency in this bankrupt world is what we share with someone else when we're uncool." - Lester Bangs in Almost Famous

Share All sharing options for: CelticsBlog high five with Steve Bulpett of the Boston Herald

I'm starting a new series called "CelticsBlog high five with _____" where I interview members of the media to get a deeper insight into the comings and goings around the Boston Celtics.  So of course I thought I'd start with my own personal Lester Bangs, Steve Bulpett.

You see, when I first started getting serious about blogging, I reached out to Steve and he was helpful, informative, and unflinchingly honest (not to mention hilarious with his dry wit).

He also happens to be hands down one of the best beat writers in the business.  So here's five questions (Get it, high five? I kill me.  So original.) Steve.  The bold questions are from me, obviously.

1. Birthdaygate was something else wasn't it? To quote Anchorman, "that escalated quickly." I think enough has been said about the subject itself but I did find it interesting that some of the assumptions that I made about how the story broke were incorrect. For instance, you pointed out on twitter that it wasn't leaked to you and Ainge couldn't have squashed it. Can you take us through the process you went through? How did you even know to ask about him? Who do you reach out to for comment, the player himself or his agent or what?

It feels a little odd to still be discussing this, but when your request arrived I sort of figured you wouldn't be asking about my R&B vinyl collection. So... 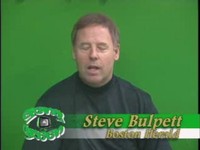 The most glaring thing I noticed missing from the Celtics that Saturday night in Sacramento was a defensive clue (Kings shoot 52 percent, score 105 points). I also hadn't seen Rondo around before the game, but he could have been in the trainer's room or elsewhere in the building. When I didn't see him afterward, I simply asked a few questions around the locker room. In progression: Was he here? Was he back at the hotel? Did he make the flight up from L.A.?

Upon further discussion, it was clear that, while the answers to the above were all "no," the issue had some complexity. So, with Herald deadlines bearing down because of the time difference, I stored what I had and went to work on it again the next day. The important thing with any story is, of course, to get it right, and in this case there were some mixed messages. The Celtics had an off-day Sunday following the back-to-back, but after reaching out to a number of people by phone, putting that together with the initial information and getting the basic timeline of what had taken place, I came to the conclusion that a.) some people were truly bothered by Rajon's choice and b.) others weren't fazed by it at all.

But there were still discrepancies to resolve, and the story lacked the needed context. When those issues were cleared on Monday, the next step was to make sure Danny Ainge and Rondo had an opportunity to comment.
And, no, Ainge could not have killed the story. If he'd said nothing had taken place and that there was no issue between the team and Rondo, his denial would have run beside the contradictory facts as they had been learned. Danny is very tight with information (dammit), and he's not above using semantics to throw a reporter off the scent (the re-acquisition of Antoine Walker comes to mind -- dammit), but this was a simple case of telling him the story that was running and asking if he wanted to be included.

In the end, I didn't believe the matter was worth the level of attention it received, but we don't get to decide those things. So why did so much work go into something that rated nine paragraphs at the top of a gameday notebook? Because we were still determining the depth of the story as the process unfolded, and because you need to present readers with the proper perspective.

2. The trade deadline ended up being much ado about nothing (hey nonny nonny). I always assumed that Rondo being moved was a long, long shot but we've heard conflicting reports on how seriously he was discussed in trade talks. Sometimes I wonder how much of that is semantics ("hey, we'll always listen to everything") and how much of it is outright lies (people with agendas putting out misinformation). I respect your information as much as anyone in the business. So without revealing too many trade secrets (pun intended) how do you go about staying on top of rumors?

You talk -- to everyone. The only way I know how to get through a trade deadline is to enter into a committed relationship with your phone. During the rest of the year, it is on the table at night. During that last week, it is on the adjacent pillow. (But it doesn't get weird. I swear.)

In that the Celtics are always on the road for deadline, it can be a rather disorienting experience. You're juggling calls, begging for the phone to ring and surviving on the extra muffin from the continental breakfast in the concierge lounge. And when you return to the hotel after the game, you're sometimes forgetting your room number. (Just walk to the front desk and hand them your ID. There's no dignified way to do this or cool excuse you can offer that won't make them believe you're not the utter imbecile you are.)

The only way I know how to get through a trade deadline is to enter into a committed relationship with your phone.

Over time, you grow a fairly strong network of people in the league you can trust, and you become an information broker of sorts. There are times you'll know a certain player is available because someone from another team will ask about him -- what kind of guy he is, strengths and weaknesses, how long he stays after practice to work on his game, etc. The best GMs are the ones who leave the fewest stones unturned and who are best able to understand the situation around a player when judging how he might do elsewhere.

As you've seen, there are some misleading and a few simply false reports that arise, and you have to check these out, as well -- even the ones that make no sense. There are sources who appreciate you calling for verification/debunking. There are others who wonder why you're wasting their time with this junk. I swear you can hear their eyes rolling on the other end of the line. Just like the front desk people.

3. "Tanking" is an easy topic for fans to compartmentalize in their heads, but the players and coaches have a very different perspective. Winning is still a priority every single game and many of these guys are accustomed to success in the past (either in the League or in college). What's it like covering proud, competitive athletes that lose 67% of the time?

Sort of like being a Democratic legislative campaign strategist in Texas.

OK, not really. Writers have no stake in the outcome.

In all sporting cases, you're reporting what happens and trying to give the readers access to information they might not get elsewhere. But the points of emphasis certainly change when you go from covering a team expecting to make a deep playoff run to one in full rebuilding mode. You focus more on how players are developing (Sullinger's return from surgery, Olynyk's court sense, Rondo's jump shot) than on what one game might indicate about a team's ability to win next week or in the postseason.

The players? They understand what's going on. They may get bold at times with some "we're not out of this yet" quotes, but these are smart men. They know that management is more rightfully concerned with what will make this a better team down the line, not what will squeeze out five more wins now.

4. I know how much of a grind it is to come up with material to write about every day. That said, I have it easy because you and the rest of the beat writers are the ones putting in the work to get the quotes and track down stories. For the future sports writers out there (or perhaps just the fascinated general public) take us briefly through the glamorous life of a beat writer.

I would need a book to properly answer this one, but there's the small and rather inescapable matter of no one giving a rat's [expletive]. Having worked loading trucks out of a refrigerated warehouse, as a bouncer and on a landscape crew, I find it a little unseemly to whine about the obstacles one encounters on this job -- e.g., you get to go to a lot of great cities, but because of the work, you don't have the time to truly explore and enjoy them. I figured out a long time ago that there are good and bad parts in every line of work, so you enjoy the former, deal with the latter and move on.

I will say the in-season physical toll of strange sleep patterns, poor eating habits, cholesterol spikes and travel is greater than most people would think. (My primary care physician wants me off the beat even more than the readers do.) But indigestion from airport food isn't exactly an industrial accident. And if you're lucky enough, as I am, to work with and for good people, it's a damn good gig. Trust me, I appreciate the hell out of it.

5. Crystal ball time: If you had to guess, what do you think is coming this summer? Major upheaval or minor tweeks? Swing for the fences or further selling off? Going for it next year or kicking the can down the street another season? (And yes, I'm totally trying to get you quoted out of context on HoopsHype so that another firestorm of rumors will take off because of you.)

OK, ya little bastid, why don't we just move straight to religion and politics? I don't need your help to make a fool out of myself, Clark.

In truth, none of these questions can be addressed in any meaningful way until the evening of May 20th following the NBA lottery. At that point, the Celtics will know what they have in 2014 draft currency and whether they can accelerate the reconstruction.

And I trust that will give you better and more pressing things to do than interviewing the likes of me... If not, we're all screwed.