Almost Famous scene where Miller finally getting his interview with Russell Hammond: William Miller: "So Russell... what do you love about music?" -- Russell Hammond: "To begin with, everything."

Rajon Rondo can tell you first hand that doing color commentary is not as easy as Tommy makes it look. I'm here to tell you that interviewing athletes is not as easy as Abby Chin makes it look. I've had the opportunity to use my press pass from time to time but I mostly play a wallflower in the locker room. The times that I've actually tried to ask questions I've sounded a lot like Chris Farley interviewing Paul McCartney. So I thought I'd catch up with Abby and ask her a little about how she approaches her job. Here's the interview (which is about 1,000 times easier in print).

1. I get the feeling that sideline interviews with coaches are a lot harder than they might appear at first. Some coaches actually try to give thoughtful answers while others avoid saying anything useful at all costs. What's your approach to getting the best soundbite you can from the coach?

My approach changes depending on the situation. At half-time, for example, everything has to be very quick. We catch Head Coach Brad Stevens as he's walking from the locker room out to the court and sometimes he is later than others. In that situation, I try to focus on what's happened in the game so far and what needs to change in the second half. I've learned with Coach Stevens the more specific the question, the more specific his answer will be. Earlier this season after a poor half shooting I said to Coach, "It feels like there's a lid on the basket. How do you take it off?" He said simply, "make shots." That's it. So, I try to keep my questions a little more general in an attempt to get as much information from him as possible.

2. Post game interviews with players seem like another animal altogether. The guys are walking off the court tired, distracted, and either still hyped up or perhaps emotionally spent. How does your approach change for tackling this very different kind of interview?

The post-game walk-off interview is my favorite part of the job. I get to talk to players while their emotions are still running high. You don't get any more fresh, honest answers than in those situations. And, I have it easy because we only talk to players from the winning team. So, everyone is in a pretty good mood. The amount and quality of information depends on the individual. Some guys are just better speakers than others. My goal is to try to capture the excitement of the game, find out why it played out that way and then put the win into context.

3. During the flow of the game, what do you look for in terms of reporting from the sideline? I'd imagine you have to have a good working relationship with the trainers and medical staff. Not to mention some good old fashioned listening skills while the coach is working his huddle.

Most games I go in with a number of story-lines that we're following that night. Those topics range from a specific match-up to injury updates to a player's mindset. The information for those reports I gather from practices and shoot arounds. From there, the flow of the game dictates which angles are pertinent and how much we have time to talk about. As far as in-game injuries go, I'm not allowed to speak directly to the training staff. The teams' media relations staff typically go back to the locker room with the injured player and medical personnel, then the MR person delivers the prognosis as quickly as possible. When I stick my head in the huddle, the goal is to capture the scene. Coach Stevens has asked us to stay away from reporting any strategy or tactical information, so I'm focused on the overall message. 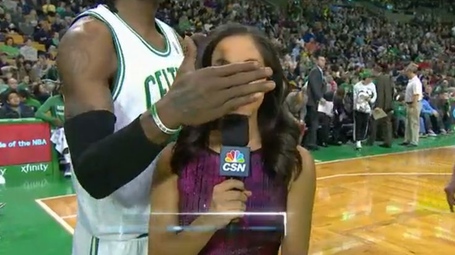 4. What observations would you like to share about this team as someone who's seen them up close all year? What do you think we're missing by watching from home?

Coach Stevens has said it a lot lately, the Celtics locker room is filled with "character guys." Everybody gets along. There aren't any cliques or in-fighting. As I'm sure you know, the NBA is all about effort. If a team gives maximum effort every night they'll give themselves a chance to win. It's amazing how much fight these guys have and continue to show. On top of that, they're staying positive despite the losses. To a man, the players are sticking to the message and believing in process and patience. I've been in locker rooms where that wasn't the case and it makes everyone's job that much harder, from the coaches to the training staff to the media.

5. At the beginning of the year, Gerald Wallace seemed to call out the team in the press every other day for lack of effort. Lately he seems to have deferred to Rajon Rondo who has a different approach (when he is answering questions, he generally seems to take the blame upon himself and praise his teammates). But that's just my impression from many miles away. What are your impressions of the lockerroom dynamics?

Early on, I think Rajon Rondo's ability to lead was limited because he couldn't be on the court. His strengths as a leader are on display in games. His command of the game, taking control of the situation and leading by example are what he excels at. Rondo wasn't able to do that from the sideline while he continued to rehab his knee. Gerald Wallace is in that position now out with a season-ending injury. He can't speak up because he's not on the floor. His words don't have the same effect if he's not out there every night, fighting alongside his teammates and giving his all night in and night out.